H Stuart Patterson’s life was one of extraordinary achievement. He had a distinguished record of service to medicine, in war and peacetime, and to the community. 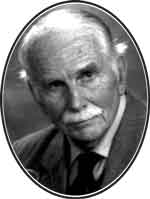 Stuart was born on 17 September 1911 in Aramac, central western Queensland, where his father was the Medical Superintendent. He was educated at Ipswich Grammar School, where he described his academic achievements as “pretty undistinguished”. He did, however, excel at sport, playing cricket in the First Eleven and representing the school in tennis.

On his return to Australia just before the outbreak of World War II, he worked for a short period at the Brisbane General Hospital. Then, in 1940, he joined his father in general practice in Ipswich, where he remained for 35 years (apart from a period of war service as a Captain in the Royal Australian Army Medical Corps). In 1975, he moved to the Sunshine Coast, where he practised for a further 11 years.

Stuart was a Foundation Member of the Royal College of General Practitioners (1953) and co-founder of the Royal Australian College of General Practitioners (RACGP) (1954), and served on their councils for 5 years and 20 years, respectively. He was elected to Fellowship and Life Membership of each college, and was awarded the prestigious Rose–Hunt Medal by the RACGP in 1981 for outstanding service in promoting the objectives of the College. He was President of the RACGP from 1961 to 1963.

Stuart served as a Councillor on the Queensland Branch Council of the British Medical Association (later the Australian Medical Association [AMA]) from 1948 to 1968, and was President of the Branch from 1954 to 1955. He was elected to Fellowship of the AMA in 1970 (and later awarded an honorary life membership), and received the Citation of the Queensland Branch in 1990.

Stuart was also a Foundation Member of the Paediatric Association of Queensland (1949) and worked as a Visiting Paediatrician at Brisbane’s Mater Children’s Hospital (1949–1961) and the Ipswich General Hospital (1961–1975).

He served as a member of the Order of St John of Jerusalem for 22 years, and was an active Rotarian. He was named Paul Harris Fellow in 1986 for exceptional services to the Rotary Foundation and was made a Member of the Order of Australia in 1994 for outstanding and meritorious service to medicine and the community. He was a member of the Queensland Cricket Club, Queensland Rugby Club, Senior Golfers Society, Caledonian Society and the National Trust.

Stuart died in Ipswich on 15 May 2004, and is survived by two sons and three daughters.