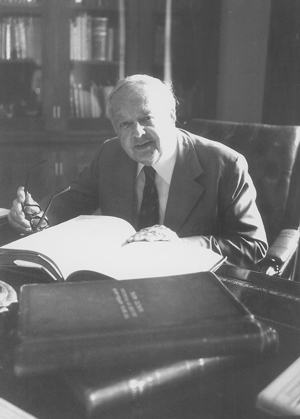 Ronald Winton was Editor of The Medical Journal of Australia from 1957 to 1977. He would be the first to agree that his life had been a good one. Departing it, on 13 February 2004, at the age of 90, he would have thanked God for its variety, its achievements, and the love he received from his family, friends, colleagues and staff, as well as the many students for whom he became a surrogate father.

Ron was born in 1913 in Campbelltown, New South Wales. His medical career began at Brisbane Hospital in 1935 and continued during Army service. He described his war as “quiet”, but managed to have some adventures in Palestine and New Guinea, retiring with the rank of Lieutenant-Colonel.

Ron came to the Journal in 1947 as assistant to Mervyn Archdall, succeeding him as Editor in 1957. In those days, the Journal was wholly produced within The Printing House, at Glebe, from subedited manuscript through typesetting in hot metal to printing and binding. Ron’s term saw many changes — in medicine itself, in publishing procedures, in practice management and in medical insurance. He also saw the transition from the branches of the British Medical Association in Australia to the independent national and state bodies of the Australian Medical Association (AMA), and the controversial negotiations with government during the early days of Medibank. His editorials on medicopolitical topics were always insightful and balanced.

Ron left his stamp on medical journalism in Australia in many ways. He edited the Australasian Annals of Medicine for some years and helped to formulate the Code of Conduct for pharmaceutical advertising for the National Medical Media Council. Through all the changes he steered the MJA, the “flagship” of the AMA, enabling it to keep honourable company with the great journals of the world. On his retirement he was awarded the Gold Medal of the AMA.

Outside work, his passions included music, literature, theology and history (he lectured in the history of medicine at the University of Sydney). These topics often flavoured staff morning teas, to everyone’s great delight.

On the world scene, Ron was a member of the World Medical Association, chairing its Committee on Medical Ethics, as well as the International Congress of Christian Physicians. His love affair with books led him to write several of his own.1-12 The great guiding force in his life was his deep Christian faith, exemplified in all his activities, especially his 20 years as Honorary Warden of “Wingham”, an Anglican hostel for country and overseas students.

The Journal had been fortunate in its editors. Henry William Armit established its tradition of scrupulous accuracy, Mervyn Archdall brought wit and flair, and Ron Winton injected his own brand of wisdom and grace. As an editor, he was a hard act to follow. As a man, he inspired loyalty and love.