Objectives: To document diagnosis rates of type 2 diabetes mellitus in children and adolescents in Western Australia over the past 12 years, the clinical characteristics of these patients and any comorbidities.

Setting: Tertiary paediatric referral centre (the only such centre in WA).

Patients: All children and adolescents aged < 17 years diagnosed with type 2 diabetes between 1990 and 2002 and managed by Princess Margaret Hospital Diabetes Unit.

Results: 43 patients (15 males and 28 females) were diagnosed with type 2 diabetes. Age (SD) at diagnosis was 13.6 (1.8) years. The rate of diagnosis has been progressively increasing (average annual increase in the unadjusted overall rates of type 2 diabetes was 27%). Twenty-three patients (53%) were of Indigenous origin and 18 (42%) resided in rural areas. The mean (SD) HbA1c level at diagnosis was 10.0% (3.2%). Seventy-two per cent of patients had acanthosis nigricans, 59% had hypertension, and 24% had hyperlipidaemia.

Conclusions: There has been an increase in the diagnosis rate of type 2 diabetes in children and adolescents in WA. Comorbidities are frequent.

All children and adolescents aged < 17 years with type 2 diabetes diagnosed between 1990 and 2002 were included in the analysis. Patient data were obtained from the database and missing information was sought from patient files. Differentiation of type 2 from type 1 diabetes was made using a combination of examination findings, anthropometry (including weight and body mass index [BMI]), the presence of acanthosis nigricans (Box 1), a family history of type 2 diabetes, C-peptide level, and an absence of autoantibodies.

Demographic (date of birth, sex, date of diagnosis, postcode at diagnosis, ethnicity) and anthropometric (height and weight) data were also collected, and blood pressure and lipid levels were measured. HbA1c level was measured at each clinic visit for all children from the time of diagnosis.

Hypertension was defined as systolic or diastolic blood pressure greater than the 95th centile for age, sex and height.3 Hypercholesterolaemia was defined as a total cholesterol level ≥ 5.2 mmol/L (≥ 200 mg/dL).4 HbA1c level was measured by agglutination inhibition immunoassay (Ames DCA 2000, non-insulin-dependent diabetes mellitus reference < 6.2%). BMI Z scores are calculated by subtracting the median reference value of a population from the observed value and dividing by the SD of the reference population. A Z score of 0 is equivalent to the median (50th percentile) and a Z score of 2.00 is approximately equal to the 97th percentile.

Population statistics were obtained from Australian Bureau of Statistics census data.5,6 Estimates of the Indigenous population were made by the Epidemiology Branch of the WA Department of Health, based on 2001 census counts and adjusting annually for births and deaths. Incidence rate ratios were calculated using Poisson regression. BMI Z scores were calculated using Epi Info7 and based on 2000 Centers for Disease Control and Prevention growth charts.8

Our results suggest that there has been a significant increase in the diagnosis rate of type 2 diabetes in children and adolescents in WA, particularly over the past 7 years. The true incidence is likely to be increasing in line with the increase in obesity in our society.9 An alternative explanation for the increase in type 2 diabetes in young people is increased referral of obese children to our institution and increased screening for diabetes. However, the magnitude of the change makes this explanation unlikely. The peak age at diagnosis was between 13 and 14 years. This is also the time of peak insulin resistance during puberty.

Acanthosis nigricans is thought to be a clinical marker for hyperinsulinism (Box 1). Detection in subtle cases may be difficult, so it is possible that more than 72% of our patients had this skin finding. Acanthosis nigricans may be a useful screening tool for type 2 diabetes in obese children.

In our sample, a high proportion of patients had cardiovascular risk factors (hypertension or hyperlipidaemia) in addition to type 2 diabetes. Insulin resistance and obesity have been previously associated with both hypertension and hyperlipidaemia in children and adolescents.10 These factors, which together form the metabolic syndrome in adults, may increase the risk of cardiovascular disease in this cohort of children.

In addition to type 2 diabetes, obesity is associated with many other medical problems (apart from hypertension and hyperlipidaemia), including obstructive sleep apnoea, polycystic ovary syndrome, hepatic steatosis and orthopaedic and psychological disorders.9,10 Children and adolescents with obesity and type 2 diabetes should be assessed for the presence of these conditions when appropriate.

The increase in type 2 diabetes in children and adolescents has public health implications for Australia. Population-based strategies to increase activity, decrease sedentary behaviour and improve dietary intake are required to decrease the prevalence of overweight and obesity in our youth. Suggested strategies include setting achievable goals, involving whole families, using developmentally appropriate methods, giving education about nutrition, and incorporating increased physical activity during school hours.9 As type 2 diabetes appears to be more prevalent in the young Indigenous population, particular attention will need to be paid to this condition in preventive healthcare for Australia’s Indigenous population. 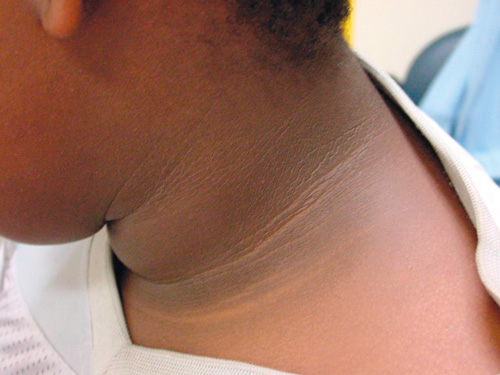 An abnormally increased thickening and pigmentation of the skin in skinfold regions, which can be associated with obesity and high insulin levels.

We are grateful to Mr Max Bulsara for statistical advice.