What drives change? Barriers to and incentives for achieving evidence-based practice

One of the most consistent findings in health services research is the gap between best practice (as determined by scientific evidence), on the one hand, and actual clinical care, on the other. Studies in countries such as the United States and the Netherlands suggest that at least 30%–40% of patients do not receive care according to current scientific evidence, while 20% or more of the care provided is not needed or potentially harmful to patients.1

Reflecting on this failure of implementation, most experts in healthcare improvement now emphasise the crucial importance of acquiring a good understanding of the problem, the target group, its setting and the obstacles to change in order to develop more effective strategies for change.2 For instance, a researcher may ask why some physicians in outpatient clinics have adopted strict surveillance of patients with diabetes through regular examination of feet and eyes and cardiovascular and renal risk assessments, while others have not. Is it because some physicians have a better understanding of guidelines, more support staff, more active self-care patients and/or greater financial incentives to change their behaviour? Although the answers to such questions could be crucial in developing targeted and effective implementation strategies, there is a dearth of quality overviews of factors relevant to effective implementation of evidence.1 We aim here to briefly provide such an overview, to describe how barriers and incentives to change in practice can be identified, categorised and used to tailor interventions to facilitate desired change.

Most knowledge of barriers to and incentives for change is not derived from well designed prospective studies, but rather from observational studies and theoretical reflections. A summary of some of the theories and models relating to implementing change in diabetes care is given in Box 1. Most of the theories overlap, and most are not supported by scientific research on their ability to facilitate change in clinical practice. Nevertheless, they are useful for identifying potential barriers and promoters for change. For example, a study of the failing implementation of evidence on hand hygiene in the healthcare setting1 identified a variety of barriers to change, including a lack of awareness, knowledge, reinforcement, control, social norms, leadership and facilities. Furthermore, the study showed that different theories can indeed contribute to explaining the failure to adopt best practice. A survey of perceived barriers to implementing guidelines on diabetes care showed similar results (Box 2).

In attempting to categorise the determinants for change, two complementary approaches may be used, the first focusing on characteristics of individual professionals and the second on interpersonal factors and system characteristics.

Individual professionals need to be informed, motivated and perhaps trained to incorporate the latest evidence into their daily work. For instance, Cabana et al4 used a “professional perception model”. Based on a review of 76 studies on barriers to guideline adherence, they identified salient factors as lack of awareness, lack of familiarity, lack of agreement, lack of self-efficacy (ie, the belief in one’s ability to perform a behaviour), low expectancy of favourable outcomes, inertia/lack of motivation, and perceived external barriers beyond the control of individuals. Empirical data showed that lack of awareness and motivation, as well as perceived external factors, were particularly important barriers to adopting guidelines.

Other models describe the stepwise change process that individuals need to undergo to alter their behaviour. “Stages-of-change” theories5-8 have mostly been used to distinguish between patients with different degrees of motivation to adopt better lifestyles, but are increasingly being used in research of implementation strategies. However, a systematic review of stage-based interventions has found only limited evidence for their effectiveness.9 Integrating various stages-of-change theories, we have compiled a 10-step model for inducing change in professional behaviour (Box 3). Studies are under way to test the validity of these steps.

Healthcare professionals work in specific social, organisational and structural settings involving factors at different levels that may support or impede change. For instance, the “PRECEDE–PROCEED” model7,10,11 makes a distinction between “predisposing factors” (eg, knowledge and attitudes in the target group), “enabling factors” (eg, capacity, resources, availability of services) and “reinforcing factors” (eg, opinions and behaviour of others). Systematic reviews of studies on effective implementation of evidence and guidelines12,13 have shown that strategies that take into account factors at all three levels (predisposing, enabling and reinforcing) are the most successful.

Many quantitative and qualitative studies have shown that failure to implement evidence involves factors at different levels of the healthcare system (including characteristics of professionals and patients; team functioning; influence of colleagues; organisation of care processes; available time, staff and resources; policymaking and leadership).14,15 The example of barriers to implementing guidelines on diabetes care (Box 2) underlines such findings.

A multilevel approach to examining barriers and incentives for change

Based on analyses of the literature and research conducted at our research centre, we propose that barriers and incentives be examined at six different levels: the innovation itself, the individual professional, the patient, the social context, the organisational context, and the economic and political context (Box 4). Relatively little attention has been given so far to research on characteristics of the innovation itself that affect its likelihood of being implemented.1

Tailoring strategies to bring about change

Information on potential barriers and incentives for change can be obtained in various ways, including interviews, surveys, focus groups, Delphi methods, observation in the care setting, auditing records of routinely collected data, and analysis of documents. This information can be used to tailor implementation strategies.

There is limited evidence to show whether tailored interventions are more effective. We do know that some efforts at tailored intervention have been unsuccessful. For instance, a UK study of general practitioners used face-to-face interviews, guided by psychological theory, to identify barriers to implementing guidelines on depression.16 However, this tailored intervention did not change professional performance any more than distribution of the guidelines only. Another study, in Norwegian general practice, on guidelines for sore throat and urinary tract infections used multiple methods to identify barriers to change: observations, telephone interviews, a postal survey and data extracted from medical records.17 A multifaceted intervention was developed, tailored to the problems found, including a short summary of the guidelines, patient education materials, computer-based decision support, extra fees for telephone consultations, and interactive courses for professionals. Despite this intensive intervention, no change in the main outcomes was found. Process evaluations after completion of the project suggested that lack of time and resources contributed significantly to this failure.

Thus, we still lack the information on how to effectively tailor interventions to produce change. Some new methods, such as “intervention mapping”, are being devised, but their usefulness is yet to be tested.18

Although we are now aware of the importance of understanding factors that facilitate or hinder change in clinical practice, we still lack in-depth knowledge of which factors are decisive in achieving which changes, in which target groups and which settings. Better use and testing of existing theories in prospective trials may help us, along with studies to test the implementation processes, in-depth analyses of putative success/failure factors, and meta-analyses of research on improvement programs. In the absence of this knowledge, the success or failure of an implementation intervention may well be left to chance.

2: Perceived barriers to implementing guidelines on diabetes care, from a survey of physicians in general hospitals in the Netherlands3

3: Potential barriers/incentives in relation to a proposed 10-step model for inducing change in professional behaviour6 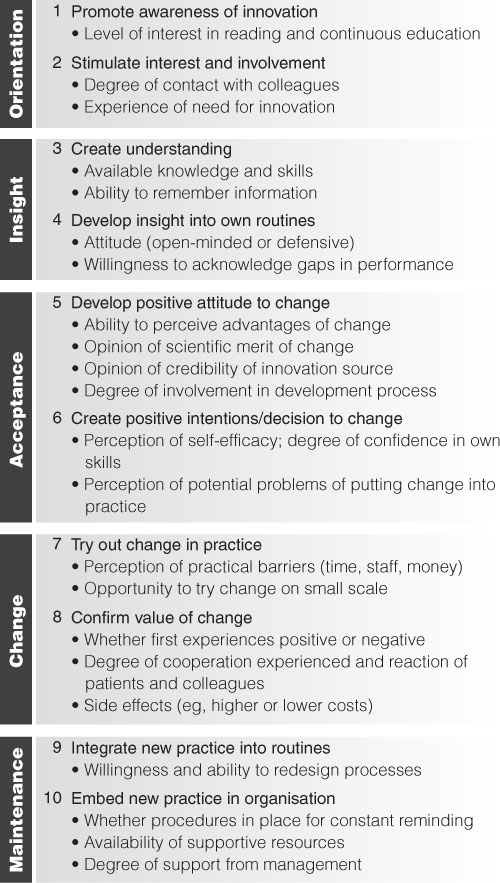 4: Barriers to and incentives for change at different levels of healthcare