After holidaying in Vanuatu, a 24-year-old man presented with pleuritic chest pain and chest wall tenderness thought to be musculoskeletal in origin. He developed fatal acute renal failure, jaundice, respiratory failure, myocarditis and rhabdomyolysis. Subsequent serological results showed a rise in serum titre of antibodies to Leptospira grippotyphosa, from 1 : 50 to 1 : 800, consistent with acute infection.

Leptospirosis is a spirochaetal zoonosis uncommon in Australia. There were 245 reported cases in Australia in 2000 and 230 in 2001, most in Queensland.1 However, many cases would be mild and self-limiting, remaining undiagnosed and unreported.2

We describe a young man who developed multi-organ failure after presenting with pleuritic chest pain and chest wall tenderness. To our knowledge, this presentation of leptospirosis has not been reported previously.

A 24-year-old man presented to an emergency department with a 1-day history of left-sided pleuritic chest pain. He worked as a metal machinist and was previously well. Two weeks before his presentation, he had returned from a 10-day trip to Vanuatu, where he had injured the sole of his foot on coral. After injuring his foot, he had swum in freshwater rivers.

The physical examination revealed slight left-sided chest wall tenderness alone. The wound in his foot showed no sign of local inflammation. His full blood count, renal and liver function tests, coagulation profile, arterial blood gases and chest x-ray were all normal. He was admitted to hospital for observation and pain management. The initial diagnosis was musculoskeletal chest pain of unknown origin.

A diagnosis of severe pneumococcal pneumonia was made. The differential diagnoses included atypical pneumonia and leptospirosis. He received intravenous fluids and penicillin (1.2 g twice daily), ciprofloxacin (200 mg daily) and metronidazole (500 mg twice daily), but became oliguric and required inotropic support. He was then transferred to a tertiary hospital for renal support.

On admission to that hospital, he was alert with no evidence of meningism or conjunctivitis. He was febrile (39.2°C) and tachypnoeic with left-sided bronchial breathing on auscultation. His electrocardiogram (ECG) showed sinus tachycardia with inferolateral T wave inversion.

Over the next 2 days, he required increasing inotropic support with infusions of adrenaline (2.22 μg/kg per minute), noradrenaline (2.22 μg/kg per minute) and vasopressin (3 U/h) to maintain adequate blood pressure. A transthoracic echocardiogram showed a mildly dilated left ventricle with a left ventricular ejection fraction of 35%–45% (RR, > 50%), and a mildly dilated right ventricle with moderate depressed contractility. He was in atrial fibrillation with intermittent runs of ventricular tachycardia and one episode of ventricular fibrillation that required cardioversion.

Because of the possibility of an immunological diagnosis (eg, vasculitis or Wegener’s syndrome), he was treated with pulses of 1 g intravenous methylprednisolone and then started on maintenance dexamethasone (4 mg four times a day). A short synacthen test excluded adrenal insufficiency.

On Day 8, he suffered an asystolic arrest from which he could not be resuscitated.

Subsequent serological results showed a 16-fold rise in the titre of antibodies to Leptospira grippotyphosa by microscopic agglutination, from 1 : 50 on admission to 1 : 800 on the day of his death. All microbiological cultures remained negative, including four sets of blood cultures.

Thick and thin blood films examined at the time for malaria parasites were negative. Serological testing for dengue fever and rickettsia was negative, as was that for seven other serovars of leptospiras, influenza viruses A and B, Mycoplasma, adenovirus, Chlamydia psittaci, Toxoplasma, Legionella, cytomegalovirus, Epstein–Barr virus and HIV.

At autopsy, the right and left lungs were extensively mottled and haemorrhagic in appearance, with bilateral lobar- and bronchopneumonia. There was no evidence of pulmonary embolism. Sections of myocardium showed a diffuse, full-thickness interstitial neutrophilic infiltrate, indicating acute myocarditis. Both kidneys showed widespread acute tubular necrosis and multiple well-demarcated areas of infarction. No attempt was made to isolate leptospiras at autopsy.

Leptospirosis has not previously been described to present with pleuritic chest pain and chest wall tenderness. We report this patient so that leptospirosis can be considered as a cause of such a presentation and to emphasise that the disease can occur in travellers who visit endemic areas. We assume that the cause of our patient’s chest pain was probably early myalgia from his chest wall musculature, and the start of pulmonary manifestations of leptospirosis.

About 90% of recognised cases of leptospirosis are mild and self-limiting, involving a spirochaetaemic phase followed by an immune phase. The former occurs after an incubation period of 1 day to 4 weeks, and causes fever, headache, myalgia, abdominal pain, nausea, vomiting and conjunctival suffusion. In the past, jaundice has been the indicator of severe disease (Weil’s syndrome), characterised by hepatic and renal impairment, haemorrhage and vascular collapse. However, recent studies show that jaundice is no longer an accurate marker of disease severity.2

Leptospira species are endemic in feral and domestic mammals, reptiles and amphibians. Rats and other rodents are the most important sources for human infection. This usually occurs through contact with urine-contaminated soil or water, contact with infected animal tissue, or through rat bites.3

Traditionally, farmers, sewer workers, miners, fishermen and meat workers have been at greatest risk of infection. However, outdoor leisure activities such as triathlons, swimming and rafting in fresh water provide opportunity for infection, particularly in endemic areas.4

A review of notifications in Australia between January 1998 and June 1999 shows that more than 60% of patients complained of one or more of headache, fever, chills, sweats and myalgia, 56% had nausea and vomiting, 15% had renal involvement, 15% had respiratory symptoms, and 4% had pulmonary haemorrhages.3 No deaths were reported in this period. The highest occupational group was banana farmers (19%), followed by meat workers (17%) and dairy farmers (11%). Whitewater rafting guides and tourists each accounted for 1%.3

There is no sensitive, specific, low cost, rapid and widely available diagnostic test for leptospirosis.2 Because of the non-specific nature of symptoms and lack of a rapid test, leptospirosis is difficult to diagnose.

Although early antibiotic therapy may shorten the duration of renal failure and hospital stay,7 no decrease in the mortality rate has been demonstrated.5 Indeed, a recent Cochrane review of antibiotics for leptospirosis suggests that the evidence for their use is not convincing.8

Chemoprophylaxis is effective for people with potential risk of exposure. Oral doxycycline is highly efficacious, but is not recommended for long-term use.

Chest x-ray of a patient with leptospirosis 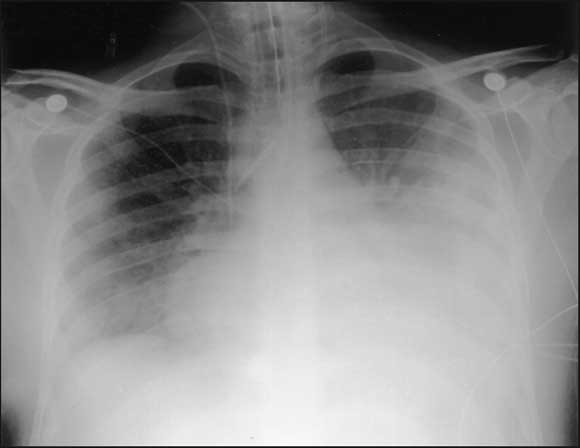 The x-ray shows cardiomegaly and extensive consolidation in the left upper and lower lobes, and some right-sided patchy opacification.

We thank Mr David Dickeson, the Serology Manager at Westmead Hospital Institute for Clinical Pathology and Medical Research. We also thank Dr Jonathan Gillis for his help in preparing the manuscript for publication.