A 71-year-old white woman presented with increased shortness of breath over a 6-day period, followed by acute onset of severe back and interscapular pain. Her past medical history consisted of hypertension, type 2 diabetes, and a distant history of alveolar-cell carcinoma of the lung, with right lower lobectomy in 1974.

Physical examination revealed an obese lady weighing 95 kg, with a blood pressure of 80/40 mmHg, pulse 110/min, and a respiratory rate of 36/min. The patient was afebrile, diaphoretic and restless. Her venous pressure was elevated. Chest examination showed reduced breath sounds at both lung bases. Heart sounds were dual with no murmurs. Electrocardiography showed sinus tachycardia, 110/min with an S wave in lead I, a Q wave in limb lead III, and T-wave inversion in limb lead III. Arterial blood analysis (inspired oxygen content of 21%) showed pH, 7.156; Pao2, 61 mmHg; Paco2, 52 mmHg; Sao2, 83%. The patient’s chest x-ray showed a widened mediastinum on a mobile supine film, and previous right lower lobectomy. The provisional diagnosis was aortic dissection. The patient was intubated and ventilated in the emergency room, then taken to the intensive care unit, where she was resuscitated with intravenous fluids (both crystalloid and colloid) and an infusion of adrenaline. Transoesophageal echocardiography showed a small left ventricle with hyperdynamic systolic function. The right ventricle was dilated, with poor systolic function. There was grade 2/4 tricuspid regurgitation, with an estimated right ventricular systolic pressure of 60 mmHg. There was grade 3/4 mitral regurgitation secondary to systolic anterior motion of the anterior mitral leaflet, and dynamic left ventricular outflow tract obstruction with a maximum gradient of 90 mmHg. Significant thrombus was seen in the proximal right and left pulmonary arteries (Box 1A). There was no evidence of aortic dissection and no pericardial effusion. Other laboratory results included elevated D dimer level of 2.93 mg/L (normal, < 0.28 mg/L), with normal serum creatine kinase and cardiac troponin I levels.

The patient was given 7000 U of unfractionated heparin and thrombolysis with 40 mg of intravenous tenecteplase administered twice, but she remained profoundly hypotensive (BP, 78/47 mmHg). Surgical embolectomy was considered, but was declined due to the recently administered thrombolysis. A decision was made to take the patient to the cardiac catheterisation laboratory for an attempt at mechanical intervention.

At the completion of the intervention, the systemic blood pressure had stabilised (90/54 mmHg) and the pulmonary pressures were only moderately elevated (44/24 mmHg). Angiography showed that blood flow through the lungs had improved. Anticoagulation was continued with intravenous unfractionated heparin. The activated partial thromboplastin time 4 hours after the intervention was > 250 seconds.

The following day the patient was extubated and discharged to the ward. Her dyspnoea and mobility gradually improved, and she was started on warfarin. Four days after the procedure, transthoracic echocardiography showed the right ventricle to be at the upper limit of normal in size, with normal systolic function. The right ventricular systolic pressure was estimated at 62 mmHg.

Acute major pulmonary embolism is associated with right ventricular dysfunction and shock.1 This condition is frequently lethal, despite thrombolysis.1,2 Adjunctive catheter fragmentation may prevent death.1-3 However, commercial systems for fragmentation of thromboembolic material are not widely available, and reported experience with these techniques is limited.

In cases of major pulmonary embolism, patients are at serious risk of death due to right ventricular failure within the first hour of onset.4 Survival depends on rapid recanalisation of the pulmonary arterial occlusion and reduction of the right ventricular afterload. According to the results from a multicentre registry, overall in-hospital mortality rate ranges from 25% for patients presenting with cardiogenic shock to 65% for patients undergoing cardiopulmonary resuscitation.2 Thrombolytic therapy is a useful adjunct to heparin in patients who have pulmonary embolism and who are haemodynamically unstable.5 Rapid improvement of right ventricular function and pulmonary perfusion, accomplished with thrombolytic therapy followed by heparin, may lead to a lower rate of death and recurrent pulmonary embolism.1,5 However, in severe cases, even high-dose thrombolytic therapy may not prevent death.2 Transvenous catheter embolectomy or open surgical embolectomy should be considered in patients for whom thrombolysis is contra-indicated or deemed unsuccessful.3,6

There are several reports of successful fragmentation of pulmonary emboli with improvised equipment in patients with shock.9 Our case is of particular interest, as thrombolysis had failed to improve the patient’s immediate clinical state. The use of a pulmonary flotation catheter to dislodge the embolism from the main pulmonary artery proved to be a useful temporising measure. This type of catheter is easily passed without the need for fluoroscopic control. In this situation, transoesophageal echocardiography proved pivotal in diagnosing the embolism rapidly, and in monitoring the response to therapeutic manoeuvres.10 Movement of the embolism from the main pulmonary artery was visualised in real time, which may be better achieved with transoesophageal rather than transthoracic imaging. Further mechanical fragmentation could then be achieved in the catheterisation laboratory. The technique consists of fragmentation of central emboli and dislocation of the fragments to the periphery, resulting in a relative gain of non-obstructed, cross-sectional artery area. Moreover, the increased total surface area of the fragments may ac-celerate the efficacy of concurrent thrombolysis.

In summary, for patients with major pulmonary embolism for whom thrombolysis is contraindicated or unsuccessful, the passage of a pulmonary flotation catheter and improvised catheter fragmentation of thrombus may be considered if there is suitable access to an interventional laboratory and an experienced interventionist.

Images of the embolism 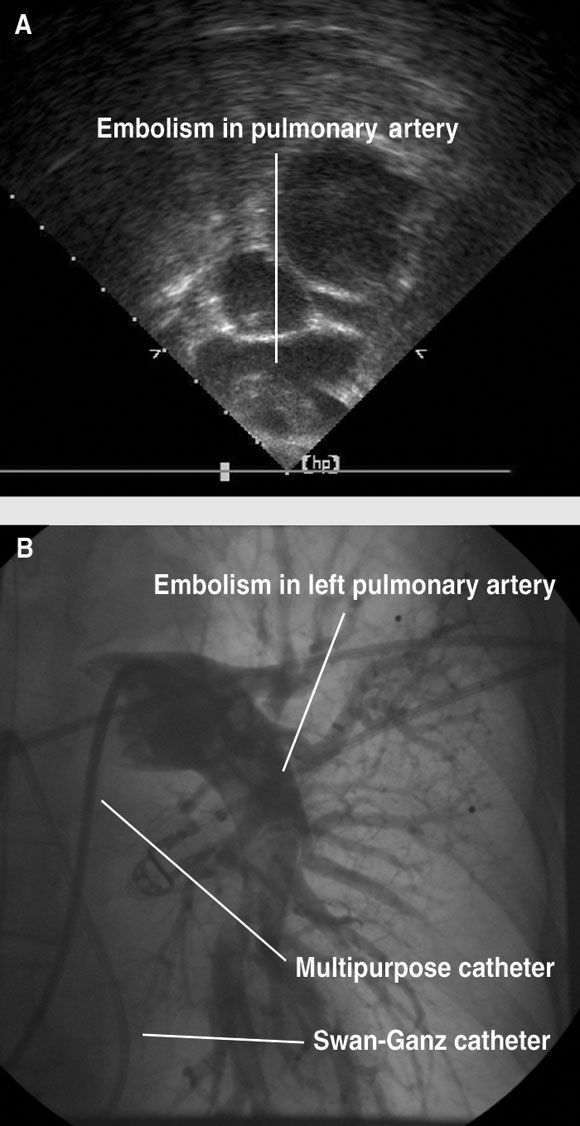 A: Pulmonary “saddle” embolism situated in the proximal main pulmonary artery, as shown by transoesophageal echocardiography.

B: Pulmonary angiography, showing the fragmented embolism that was dispersed to the segmental pulmonary arteries.