Confident localisation of ectopic parathyroid adenomas, particularly those outside the neck, can be difficult. Even preoperative radiological imaging may not be helpful, as there are few characteristic findings. We report a case in which hyperfunctioning ectopic parathyroid tissue in the mediastinum was detected with technetium-99m-sestamibi single-photon emission computed tomography and accurately localised non-invasively with image-fused computed tomography. This technique directly modified management.

Ectopic parathyroid adenomas are uncommon, but can complicate the surgical treatment of primary hyperparathyroidism. In particular, those outside the neck, and thus not found on neck exploration, produce a substantial diagnostic challenge.

A 60-year-old woman was found incidentally by a life insurance blood screening test to be hypercalcaemic. She did not complain of specific symptoms referable to hypercalcaemia, but bone mineral density assessment 2 months previously had shown osteopenia. Her past medical history was unremarkable. She was taking no medications and gave no family history of parathyroid disease. Clinical examination showed no abnormality. The results of investigations (Box 1) showed raised plasma corrected calcium, intact parathyroid hormone and ionised calcium levels, but levels of creatinine and serum phosphate were normal. Alkaline phosphatase and osteocalcin levels were mildly elevated. Urinary N-telopeptide level was within the reference range, and the fasting urine calcium : creatinine ratio was slightly elevated.

A dual-phase, dual-tracer technetium (Tc)-99m-pertechnetate/Tc-99m-sestamibi nuclear medicine study revealed a solitary focus of abnormal tracer uptake in the anterior mediastinum on both initial and delayed sestamibi images and on subtracted images (Box 2, Figure A). Retained activity in the left subclavian vein was noted incidentally. No abnormality was seen within the thyroid bed. It was suspected that the activity indicated ectopic parathyroid tissue, although it may have represented retained activity within a large vessel.

Thoracoscopic excision of the mediastinal mass was performed. No discrete abnormality matching the usual macroscopic appearance of a parathyroid adenoma was seen. A small fat pad, lying anterior to the ascending aorta, below the brachiocephalic vein and superior to the pericardium, was found and excised. Digital palpation of this tissue revealed an area of focal hardening. Histology of the operative specimen confirmed the presence of parathyroid tissue, weighing 100 mg, within the fat pad. Differentiation between adenoma and parathyroid hyperplasia was not possible. Incidental thymic and lymphoid tissue was also seen in the pathology specimen.

We have described successful preoperative localisation of an ectopic adenoma using image-fusion software, which directed the successful excision of the tissue. In this patient, either a conventional bilateral neck exploration, or a single image study without image co-registration before minimally invasive surgery, would have been less likely to result in successful or certain management.

The minimally invasive approach used in selected patients involves directed and limited neck exploration under local anaesthesia, and is usually preceded by preoperative localisation of the parathyroid adenoma with sestamibi scintigraphy. An intraoperative γ probe can also be used to help identify or confirm the adenoma (minimally invasive radioguided surgery).2,3

The role of preoperative parathyroid localisation using imaging techniques in patients who have not had previous neck exploration is currently debated.2-5 While local cost-effectiveness data are still pending, additional advantages of preoperative imaging are being found,4,5 including the detection of unsuspected ectopic parathyroid adenomas, which may otherwise be missed on routine surgical neck exploration.

Some advantages of this approach include avoidance of general anaesthesia, improved cosmetic result, and a shorter operating and recovery time.

Multiple diagnostic modalities exist for imaging the parathyroid glands. These include radionuclide scintigraphy, ultrasonography, CT and magnetic resonance imaging (MRI). Dual-phase, dual-tracer Tc-99m-pertechnetate/Tc-99m-sestamibi SPECT scintigraphy has increased the sensitivity of detection of parathyroid adenomas (up to 90%).6-9 The increased tracer uptake by hyperfunctioning parathyroid tissue is explained by the abundance of mitochondria within these abnormal cells, for which sestamibi demonstrates high avidity.10

Occasionally, as in our patient, the sestamibi scan may indicate ectopic parathyroid tissue. Developmentally, the parathyroid glands are derived from the pharyngeal pouches. The two inferior glands arise from the third brachial cleft, descending with the thymus during embryogenesis, which would account for the presence of ectopic tissue within the mediastinum.11 In ectopic disease, imaging experience is limited. Ishibashi et al,12 in a blinded, comparative study, suggested superior sensitivity of scintigraphy compared with CT or magnetic resonance imaging (MRI) in detecting such adenomas, with the sensitivity and specificity of sestamibi imaging calculated to be 70% (14/20) and 88%, respectively. The sensitivity and specificity of CT were 40% (8/20) and 88%, and of MRI, 60% (12/20) and 88%.12

Our finding on initial sestamibi scanning could have represented retained activity within a large vessel, and, as false-positive results may occur with all imaging, many investigators have advocated the need for concordance on at least two diagnostic modalities before surgical excision.4,13 On further investigation, the mediastinal abnormality seen on CT was so small that its clinical significance could not be confidently assessed. Traditionally, such a problem is unlikely to be resolved non-invasively.

In our patient, the use of new image-fusion software allowed the accurate integration of both functional and anatomical data on the one image set. This image fusion clearly confirmed abnormal sestamibi activity arising from the mediastinal mass seen on CT, implying the presence of ectopic parathyroid tissue. A similar case of ectopic adenoma detection using this technique has been described previously.14 However, in that report, the CT findings of a 2.0 × 1.0 cm mediastinal mass were clearly abnormal and strongly suggestive of an adenoma.14 Our case is the first to highlight the incremental diagnostic value of image fusion, as the CT, and indeed intraoperative, findings in isolation were inconclusive. After confirming the presence of ectopic parathyroid tissue, a thoracoscopic approach to surgery was undertaken rather than a conventional approach. 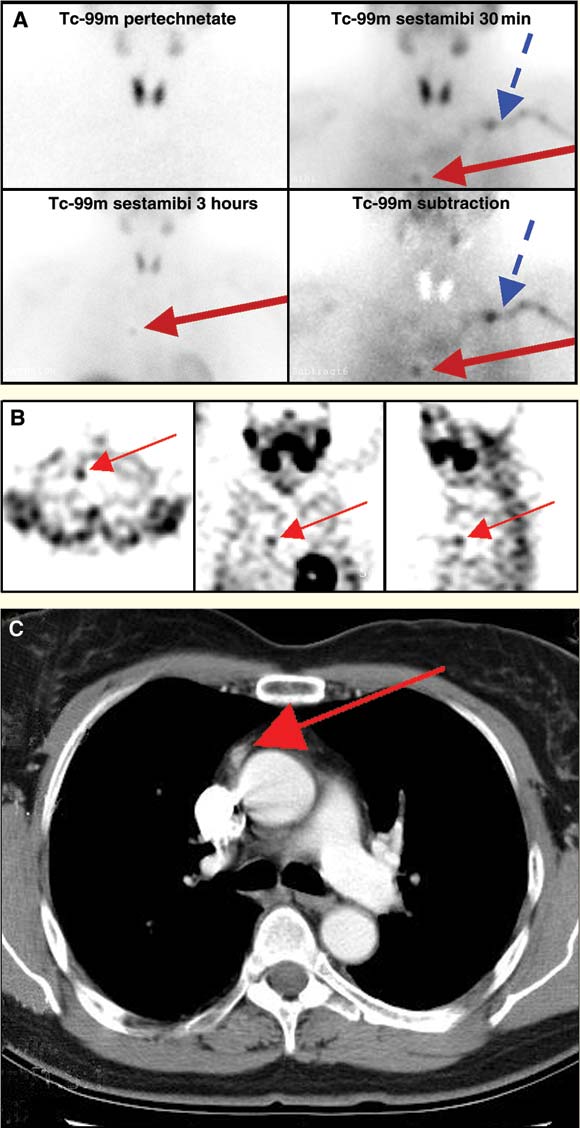 3: Localisation of an ectopic parathyroid adenoma 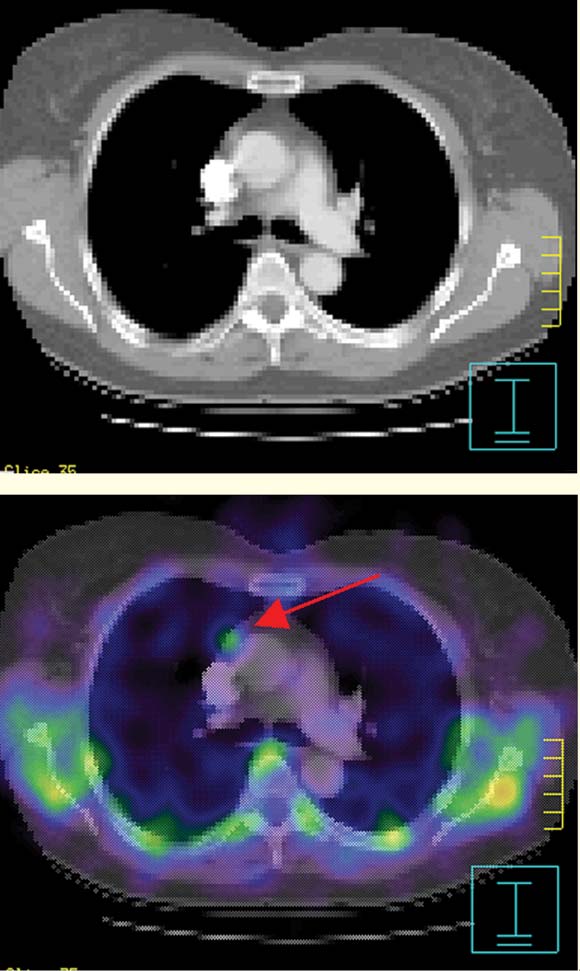