Three young men aged between 19 and 30 years presented at different times with lumps over the deltoid area at the site of Q fever vaccination (Q-Vax, CSL), which had been administered 3–8 months previously. Mandatory pre-vaccination testing had shown that all three subjects were non-immune.

Clinically, the lumps (of which two were tender) were considered to be either subcutaneous abscesses or lipomata. Sarcoidosis was excluded clinically and biochemically. The lesions were excised and were macroscopically similar, being 20–47 mm in size and resembling indurated fat. Histologically, the appearances were of sarcoidal granulomatous panniculitis (Box). No aetiology for the granulomata was identified.

Q fever, a serious zoonosis caused by a rickettsial organism, Coxiella burnetii, is spread to humans by body fluids of infected animals (principally cattle, sheep or goats). A vaccine, Q-Vax, produced by Commonwealth Serum Laboratories, is composed of a killed suspension of virulent phase 1 organisms. The vaccine, limited to Australia, was shown to be effective in trials between 1981 and 1994, and a national vaccination program, aimed at high-risk groups, commenced in 2001.

The cases we describe here are examples of a rare idiosyncratic reaction to the vaccine (probably the result of enhanced delayed hypersensitivity) that may be confused with subcutaneous sarcoidosis. This has not, to our knowledge, been previously reported.

Histological section of one of the lesions 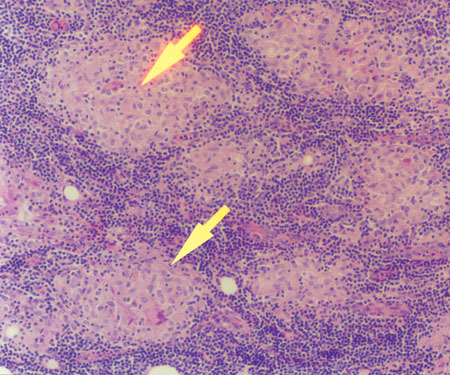 Non-caseating epithelioid cell granulomata (arrows), surrounded by a dense lymphocytic reaction. Immunostaining disclosed that more than 80% of lymphocytes were T cells and less than 20% were B cells, mainly arranged as follicular aggregates (H & E stain; size reduced by half from x100).

We are extremely grateful to general practitioners Dr O Shaw and Dr P Brady for providing clinical information on two of the cases. Our sincere thanks for advice and encouragement are also due to Professor B P Marmion (Institute of Medical and Veterinary Science, Adelaide), Dr K Taylor and Dr S Tobin (Victorian Health Department, Melbourne), and Dr N Formica (Medical Director, CSL, Melbourne).