Although the jury is still out on the health effects of mobile phones, it's well known that using a handheld phone while driving a car increases the chance of having an accident. How many communication junkies take the risk? Taylor et al (Mobile telephone use among Melbourne drivers: a preventable exposure to injury risk) took to the streets of Melbourne to find out.

The heart of the matter

Mortality from cardiovascular disease (CVD) is three times higher among Indigenous Australians than the rest of the population. The Perth Aboriginal Atherosclerosis Risk Study is a community based project which seeks to identify people who are at high risk of developing CVD, so that they can access treatment for their risk factors. The initial findings of the study by Thompson et al, (Cardiovascular risk among urban Aboriginal people.) confirm the worth of the project, but the real work is yet to come.

The future of disability

Francis Bacon might have believed that "dreams and predictions ought to serve but for winter talk by the fireside" but we do need a bit of foresight to plan for the care of our ageing population. Enter Giles et al (Disability in older Australians: projections for 2006-2031) who have used the 1998 Survey of Disability, Ageing and Carers to calculate projections for the prevalence and nature of disability in older Australians over the next 30 years.

Who should take aspirin?

Wrong end of the needle

In the early hours of the morning a staff member in a busy intensive care unit sustains a needlestick injury. A series of delays and an administrative error mean that HIV exposure prophylaxis, although indicated, is not given for almost four days. Is this Murphy's law or a system failure? Cooper and Blamey (Occupational exposure to HIV: response to a system failure) describe how the incident changed practice in their health service.

Hepatitis C is much more prevalent than HIV infection in the community; the figures derived by Charles et al on the number of healthcare workers potentially exposed in Victoria might surprise you (Management of healthcare workers after occupational exposure to hepatitis C virus). Having identified a significant problem, they propose a protocol for dealing with hepatitis C exposure from needlestick injuries.

Sex in the lucky country 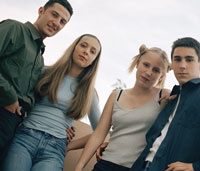 Two articles in this issue draw attention to deficiencies in sexual and reproductive health services in Australia, compared with other developed nations.

According to Skinner and Hickey (Current priorities for adolescent sexual and reproductive health in Australia) our high rates of teenage birth and abortion tell a story of ill-met sexual health needs. They outline some strategies for improvement.

Youth is also the time of highest risk for genital chlamydial infection, which is now four times more prevalent than it was a decade ago. Testing is patchy and there are many myths regarding who is likely to be infected, say Chen and Donovan (Screening for genital Chlamydia trachomatis infection: are men the forgotten reservoir?). Those hoping for increased fertility rates in Australia would do well to invest in screening for this disease.

Take the pressure down

Most people will be au fait with the reasons for treating high blood pressure. So is untreated hypertension still a problem in Australia? Briganti and colleagues (Untreated hypertension among Australian adults: the 1999-2000 Australian Diabetes, Obesity and Lifestyle Study (AusDiab)) consulted the AusDiab study, which is yielding useful national data about more than just diabetes.

Helical CT scanning is fast, sensitive, safe, and has been mooted by some as the way forward to detect lung cancer at an earlier, operable stage. So should Australia be investing buckets of money in this new technology? Elwood and colleagues from the National Cancer Control Initiative Working Group on Lung Cancer Screening give their recommendations (Helical computed tomography for lung cancer screening).

If the postman is good to us, this issue may well reach you on Jeans for Genes Day (August 1). It's the 10th anniversary of the day and, according to Weisbrot and Breen (The protection of human genetic information) Australians remain optimistic about the potential benefits of genetic research. They walk us through the highlights of a recently released report on the ethical, legal and social implications of genetic technology in Australia.

Neurologists are now called upon to use genetic testing to predict and confirm diagnoses. As our series on The New Genetics continues (The specialist neurologist and the "new genetics"), McCusker uses the example of Huntington disease to illustrate the medical specialist's role in managing genetic disorders.

Another source of public optimism is stem cell therapy. Byrne and Howells (Stem cell therapies: a tale of caution) outline some of what has been achieved but caution that it will be a long way From Bench to Bedside.

Stay humble. Always answer the phone — no matter who else is in the car.