Medical history and the European Union: Papanicolaou and Asklepios

In January 2002, 12 European Union countries introduced a new common currency, the euro, which soon afterwards displaced the national currencies of the member states. With that historical act, along with the loss of monetary individuality, we lost an unusual "document" of medical history: the Greek 10 000-drachma note.

The front of this banknote shows George Papanicolaou, the "father" of exfoliative cytology (Box, A). Born in Kymi, Greece, in 1883, he studied medicine in Athens and graduated with honours. After emigration to the United States in 1913, he began to study the ovarian cycle in animals (and later in humans), using vaginal smears. He identified the female sexual cycle and, in 1928, presented his results of "possible diagnosis of certain conditions, especially malignancy" by vaginal smear. Through his studies, he became aware that "carcinoma of the fundus and carcinoma of the cervix are to some extent exfoliative lesions, in the sense that cells at the free surface of the growth tend to be dislodged and subsequently find their way into the vagina". In 1941, he presented the method of taking and staining vaginal smears and described the cellular appearance in carcinoma of the uterus. His method was validated and adopted worldwide as the "Papanicolaou test". Papanicolaou died in Miami, Florida, in 1962. Nowadays, cervical cancer, once the most lethal of gynaecological carcinomas, is rare in Western countries, but still the first cause of death among women in most developing countries, where few women receive Pap smears.

The reverse side of the banknote shows the god of healing, Asklepios (also called Asclepius or Aesculapius), who lived around 1200 BC in Thessaly, Greece (Box, B). In Greek mythology he was the son of Apollo and the nymph Koronis (Coronis, Cronis). Apollo entrusted the education of Asklepios to the centaur Chiron, who taught him how to treat wounds and how to use herbs for healing. Zeus, who was afraid that Asklepios's great healing powers might render all men immortal and thus challenge the power of the gods, killed Asklepios with a thunderbolt. (Another version of the myth relates that Asklepios was made immortal.)

The symbol of Asklepios is the staff with a serpent coiled around it. Besides being mystical and symbolic animals, sacred snakes played an important role in healing rituals. Current biological knowledge suggests that growth factors, which are present in the saliva of certain snakes, may have stimulated healing processes at the site of wounds. 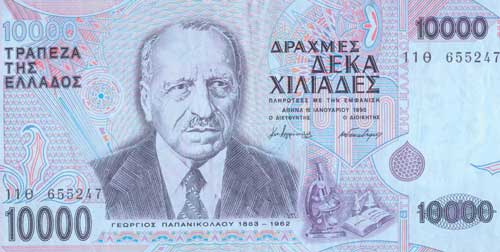 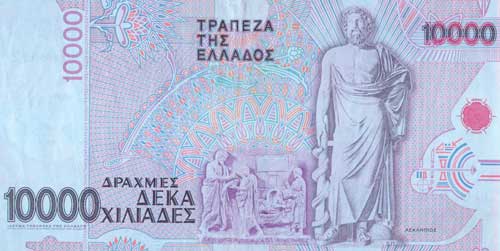 B. The reverse side of the 10 000-drachma note, showing Asklepios, the god of healing, with his symbol, the staff with a serpent coiled around it. Beside him, a healing scene depicts a sacred snake licking or biting the right shoulder of a sleeping patient.