Palmar erythema and hoarseness: an unusual clinical presentation of sarcoidosis

Palmar erythema is a very unusual manifestation of sarcoidosis. We report on a patient whose presenting features of sarcoidosis were palmar erythema and a hoarse voice. The diagnosis was confirmed by palmar skin biopsy and the patient responded well to treatment with prednisolone.

Sarcoidosis is a disease of unknown aetiology that can affect almost any organ of the body. Cutaneous involvement, occurring in up to 25% of cases of systemic sarcoidosis, is well recognised.1 However, palmar erythema is a very unusual skin manifestation of sarcoidosis — to our knowledge, it has been reported only once before in the literature.2 We describe a patient with palmar erythema and a hoarse voice who was subsequently shown to have sarcoidosis.

A 58-year-old man presented complaining of increasing hoarseness of voice of three weeks' duration. The patient had also noticed increasing redness and a burning sensation over both palms. He had no history of any drug intake, fever, cough, breathlessness, chest pain, dysphagia, weight loss or anorexia. The patient was a non-smoker and did not consume alcohol.

On examination, he had a confluent, non-blanching, macular, erythematous rash on both palms (Box 1), but no other skin rash elsewhere on the body. There was no thyromegaly or peripheral lymphadenopathy, and there were no abdominal, cardiovascular, respiratory or nervous system abnormalities. Ophthalmological examination was suggestive of episcleritis.

Results of routine tests (including biochemical, haematological and liver function tests) were all normal except for a raised erythrocyte sedimentation rate (65 mm/hour). Indirect laryngoscopy performed to investigate the hoarseness revealed paralysis of the right vocal cord with no other local abnormality. The palate showed normal mobility and the bilateral gag reflex was normal. A chest x-ray showed clear lungs, with some mediastinal widening. A computed tomography scan of the thorax revealed enlarged mediastinal lymph nodes (Box 2).

A Mantoux test was non-reactive. The serum level of angiotensin-converting enzyme was 76.2 U/L (normal range, 8–52 U/L). A skin biopsy taken from the palmar rash revealed non-caseating granulomas with multinucleated giant cells (Box 1). No acid-fast bacilli or fungal hyphae were detected on direct staining or subsequent culture of sputum and skin biopsy specimens. The histological features were thus suggestive of sarcoidosis.

After two weeks' treatment with prednisolone 1 mg/kg per day, the patient's rash had resolved completely and the hoarseness was markedly reduced. A repeat computed tomography scan of the chest done after four weeks of treatment showed that the mediastinal lymph nodes had decreased in size. The patient has remained asymptomatic over seven months of follow-up.

Sarcoidosis may involve any organ of the body and can have protean clinical manifestations, including skin lesions. Skin manifestations can be in the form of erythema nodosum (the most common), subcutaneous nodules, plaques, lupus pernio or maculopapular eruptions.3 Palmar erythema may be the presenting feature of a number of skin diseases such as eczema, psoriasis, tinea and pityriasis rubra pilaris.4 Isolated palmar erythema is commonly seen in pregnancy and liver diseases, and may occasionally occur in rheumatoid arthritis.5 However, as a manifestation of sarcoidosis, it is extremely rare.2 Interestingly, the only other reported patient presenting with palmar erythema was also of Indian origin.

The diagnosis of cutaneous sarcoidosis is based on three features:

In our patient, all three features were present.

An interesting feature was the patient's hoarse voice. Hoarseness in sarcoidosis may be caused by direct infiltration of the larynx,6 infiltration of the cranial nerves (especially IX and X),7,8 or compression of the recurrent laryngeal nerve by enlarged mediastinal lymph nodes, leading to vocal cord palsy.9 As indirect laryngoscopy did not show any local cause for the vocal cord palsy, the hoarseness in the present case was likely to be due to the third cause.

A few series of cases of sarcoidosis have been reported from India.10-12 The clinical presentation in most of these cases included fever, weight loss, cough, breathlessness or hepatosplenomegaly. Skin lesions were reported in very few of the cases, and palmar erythema in none. Our patient was also somewhat atypical in having mediastinal lymphadenopathy, which is reported to be less common in India (28%) than in Western countries (70%).13

To our knowledge, sarcoidosis presenting as a combination of palmar erythema and hoarseness of voice has not previously been reported. Our case thus highlights the diverse clinical manifestations of this disease and emphasises the fact that palmar erythema may be the only visible sign of sarcoidosis. 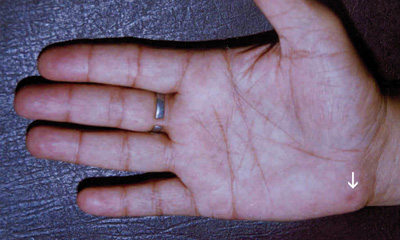 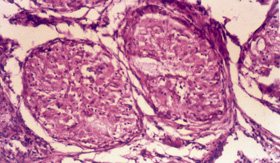 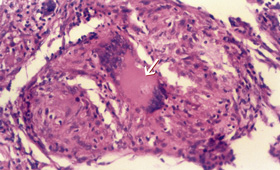 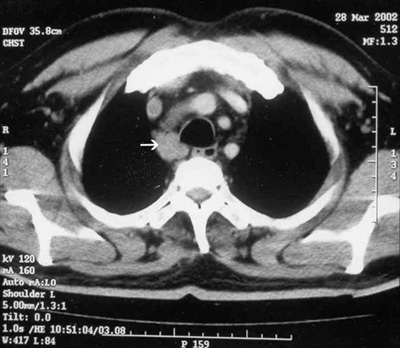