A 55-year-old taxi driver presented with a three-week history of intermittent sore throat associated with fever and rigors, which responded to paracetamol. On the morning of admission, he woke with severe aching pain in the left groin radiating to the scrotum, with associated vomiting, fever and rigors. There were no urinary symptoms and he had not had any recent new sexual contacts. His medical history included uncomplicated haemochromatosis only.

The results of investigations, including streptococcal serology (confirming recent infection) and ultrasound imaging, are shown in Box 1 and Box 2. Urine microscopy and culture were negative. Streptococcus pyogenes susceptible to penicillin was isolated from both aerobic and anaerobic blood culture bottles at 24 hours. Polymerase chain reaction tests of urine were negative for Neisseria gonorrhoeae and Chlamydia trachomatis.

Despite commencement of intravenous penicillin, the patient required incision and drainage of the scrotum on Day 4. He was discharged from hospital nine days after presentation on a two-week course of oral amoxycillin and made a full recovery.

Epididymo-orchitis can result from bacterial or viral infections. Predisposing trauma may be identified, but the majority of cases appear to be idiopathic. 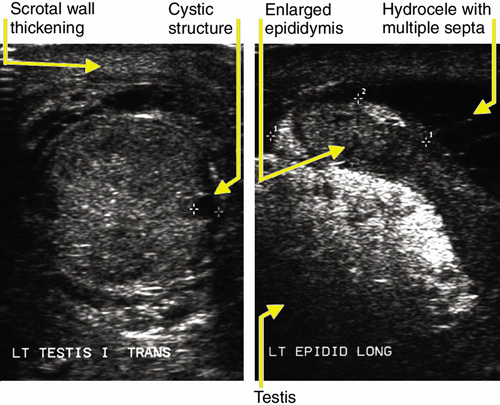