Objective: To assess the effect of adding 1 mg dexamethasone to syringe drivers on the viability time of subcutaneous cannulation sites in palliative care patients.

Participants and setting: Palliative care patients from the inpatient units at two hospices, recruited between 1999 and 2002.

For comfort, convenience and therapeutic advantage, many palliative care patients have their medications administered with syringe drivers (Box 1).1,2 The patency of the subcutaneous site is limited principally by inflammation, with sites lasting between 12 hours and 20 days, depending on types or combinations of medications, rates of infusion and whether metal needles or plastic cannulas are used.3-5 Changing the site causes patient and carer distress, and financial costs related to nursing time and equipment replacement, especially for rural and remote community-based patients. Anecdotally, it has been suggested that site lifespan can be extended by adding a small amount of the steroid dexamethasone to the syringe driver. However, this suggestion has never been rigorously tested.

We aimed to test the effect of dexamethasone on longevity of syringe driver cannulation sites and to contribute to the development of evidence-based protocols for palliative care medicine.

Our study was a prospective, double-blind, randomised, controlled trial.

Patients were recruited between September 1999 and March 2002 from the inpatient units of Mount Olivet Hospice, Brisbane, and the Ipswich Community Hospice, Ipswich, Queensland. All patients who required syringe drivers and were able to give informed consent in English were eligible for the study.

Palliative care patients and their carers may be emotionally labile and vulnerable. Inclusion in the study took this into account: if carers felt that patients would be compromised by the study then they were not recruited. All data collected were de-identified to ensure confidentiality of patients and carers.

After informed consent had been obtained, clinical nurses drew up the patient's medications and placed half the medication into each of two Graseby MS 26 syringe drivers (Graseby Medical Ltd, Watford, UK) attached to plastic cannulation devices (Saf-T-Intimas, Becton Dickinson, Sandy, Utah, US). The drivers were colour coded (red for right-sided and clear for left-sided), and the non-clinical nursing director or a research staff member added 1 mg dexamethasone in 1 mL saline to the test syringe and an equivalent volume of saline to the control syringe. Placement of dexamethasone into the left or right driver was according to a predetermined randomised sequence. A closed key of the randomisation sequence was available at each site in case of emergency. The clinical nurses (who determined the patency of the sites) and the patients were unaware of which syringe contained the dexamethasone.

The cannulas were inserted into two subcutaneous sites symmetrically placed on the patient's body. The time of positioning was recorded and sites were monitored every four hours. When the clinical nurse determined that the site was no longer viable, the time was again recorded. Criteria used to assess site failure included redness, swelling, itching, urticaria, leakage, tenderness or failure to infuse. Initially, sites were photographed before the cannula was removed, to allow for any interobserver variability to be identified; however, because of the large number of clinical nurses monitoring the sites, it was apparent that no systematic biasing could occur and so photographs were abandoned. Once a site was no longer functional, the drugs that were being delivered through that site were infused at a distant point until the collapse of the other experimental site, which represented completion of the trial.

Episodic subcutaneous medications, if required, were delivered alternately through the test and control sites. The only exception was that, if subcutaneous dexamethasone was prescribed, this was delivered through a separate distant site. All medications that each person received during the experimental period were recorded.

Results were analysed using a paired t test to test for differences in site lifespan within participants as a function of dexamethasone. Covariate analysis adjusting for the effects of additional systemic dexamethasone was conducted by regression analysis.

Formal approval for the study was obtained from the National Research and Evaluation Ethics Committee of the Royal Australian College of General Practitioners.

Thirty-eight patients were recruited (Box 2). All but one participant had a primary diagnosis of a solid carcinoma; the remaining patient had motor neurone disease. Patient ages ranged from 48 to 89 years with a mean of 68.6 years. There were 25 men and 13 women.

The number of drugs per patient delivered through the syringe drivers varied from one to four in each 24-hour period. Drugs infused are detailed in Box 3. No visible precipitates were observed in any of the test or control syringes.

Twenty of the patients (13 men and 7 women) were regarded as non-completers because their participation concluded before either of the syringe driver sites had broken down. Patients not completing the study did not differ significantly from those who did in age, sex, location or side of test site, or number of drugs contained within the syringe driver.

Six patients (5 men and 1 woman) partially completed the study. In these six patients, the dexamethasone-treated site remained patent although the control site had broken down when they concluded participation. Partial completers did not differ significantly from those completing in terms of age, sex, location or side of test site, or number of drugs contained within the syringe driver.

Twelve patients (7 men and 5 women) fully completed the study, in that the time for both test and control sites to break down was quantified to the nearest 4 hours.

For the 12 patients who fully completed the study, the addition of 1 mg dexamethasone to the syringe driver extended site lifespan by an average of 3.9 days (Box 4). This result is significant despite the smaller sample (t = 2.59; df = 11, P = 0.025). In this sample, control sites lasted between 1.8 and 22.0 days and dexamethasone-treated sites lasted between 3.5 and 24.0 days. No significant effects on site lifespan due to class, dose or numbers of drugs in syringe drivers were found.

There was one local adverse event. A 67-year-old man with bowel cancer developed a sterile abscess in the test site area, located over his left deltoid, three days after he completed the study. The site had been infused with prome-thazine 12.5 mg and dexamethasone 1 mg daily for 12 days.

Ten of the 38 participants received additional systemic dexamethasone, either orally or subcutaneously, at some stage during the study. Among the 18 who partially or fully completed the trial, seven received systemic dexamethasone, and of these, five fully completed the study. Six of the seven patients had daily doses between 2 and 16 mg subcutaneously, and one patient received 4 mg orally. In these patients, sites remained viable for longer periods: control sites lasted for 12.5 days, compared with a mean of 6.2 days in patients not receiving systemic dexamethasone. However, the outcome of interest was the difference between control and test sites.

To date, the use of dexamethasone to maintain the subcutaneous sites of syringe drivers has been piecemeal, centre-dependent and based on anecdotal evidence. Some centres use dexamethasone only with drugs that are considered irritants, such as ketamine hydrochloride, promethazine or morphine tartrate, whereas others use it only for patients whose sites are known to break down quickly. This study provides evidence (Level II according to the National Health and Medical Research Council [NHMRC] scale of weighting of evidence7) that the routine addition of 1 mg dexamethasone to the syringe drivers of palliative care patients significantly extends the lifespan of the subcutaneous sites.

Although the results suggest that the dose of 1 mg subcutaneous dexamethasone is acting locally, systemic effects may be expected with long-term use. The impact of these effects, though difficult to research in a palliative population,8 requires consideration. It would be clinically valuable to extend the findings of our study, to determine, for instance, whether 1 mg is the optimal minimal dose of dexamethasone to be added to syringe drivers, or whether topical steroid preparations could be substituted to achieve a similar benefit. The influence of other factors, such as the overall performance status of the patient, their nutritional status, pharmacological variables and prognosis, also require investigation. Such investigations would require larger sample sizes and would be appropriate for multisite studies.

It is difficult to conduct randomised controlled trials in palliative care patients, partly because death so frequently intervenes. Also, palliative care patients exhibit enormous variability in their condition, rate of disease progression, rapidly changing pharmacotherapeutics, previous treatment, age, socioeconomic status, past medical history and current psychological stressors. Our study indicates that well-designed rigorous clinical protocols can be applied in this difficult and vulnerable population. A strength of our study was that each individual acted as his or her own control, thus eliminating most potentially confounding clinical variables. This protocol could be adapted to investigate many common pharmacological questions in palliative clinical practice. The need for such investigations is reflected in the wide variation of pharmacological practices across palliative centres,8,9 and the lack of data on the compatibility and stability of drug mixtures in syringe drivers.10

Our findings are likely to be of par-ticular benefit to community-based patients, especially in rural and remote communities. Extending the lifespan of subcutaneous sites will decrease the frequency of medical interventions, decrease the operational management costs of maintaining patients in environments distant to palliative care service providers, and may contribute to an increased quality of life for patients and their carers.

1: A syringe driver in use 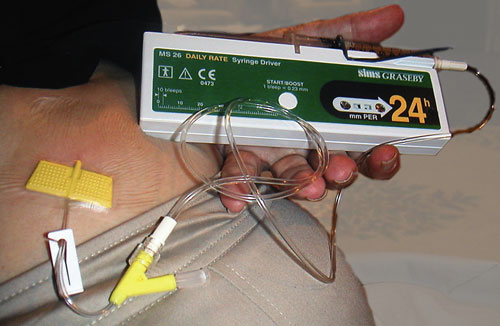 2: Flow of participants through selection and treatment

3: Drugs infused through syringe drivers during the study

4: Lifespan of sites, and difference, as a function of addition of 1 mg dexamethasone

The authors gratefully acknowledge the patients, carers and nurses who made the study possible. Particular thanks to the research nurses Fiona Israel and Jan Paton for their professional and personal input. The study was funded by the Registrar Scholarship and Research Fund, Royal Australian College of General Practitioners. Faulding Pharmaceutical donated the dexamethasone.