By any standards Australia is one of the healthiest countries in the world, although improving some aspects of health and giving greater attention to our Indigenous population1 and other socioeconomically disadvantaged subgroups still pose major challenges.2 In 1999–2000, 8.5% of the nation's gross domestic product (GDP) was spent on healthcare, ranking our health spending among the highest in the world. The vast bulk of this money, around $27 billion, is directed to curative medicine through medical and hospital (public and private) services, compared with just under $3 billion spent on community and public health.2 By contrast, Australia is surrounded by poorly resourced countries where little is spent on healthcare and where the life expectancy is much lower (Box 1).2 The people in many of these countries are burdened by emerging epidemics, such as HIV/AIDS, diseases associated with economic and industrial development, and persistent problems of communicable disease and nutritional deficiencies.

For decades many Australians have been working to improve health standards in developing countries by providing their expertise individually, or through academic institutions, professional colleges and associations (see Australian medical schools and colleges working with developing countries, page 26), United Nations agencies, government and non-government agencies and charitable organisations. Many do this work for altruistic reasons, and others for commercial gain or career development. Much of this work has gone unrecognised within Australia, with some exceptions, such as the work of the late Fred Hollows (now the Fred Hollows Foundation) in restoring sight to many thousands of cataract sufferers in Africa and Asia.3 Also important but less well known is the pioneering work of Basil Hetzel on iodine-deficiency disorders (IDD) — one of the most readily correctable public health problems of the developing world, and the commonest preventable cause of mental deficiency.4 Hetzel gathered like-minded colleagues together to establish the International Council for Control of Iodine Deficiency Disorders (ICCIDD) (http://www.people.virginia.edu/~jtd/iccidd/), dedicated to the global eradication of IDD. Our group in Australia (ACCIDD) has had a long-standing interest in research and alleviation of IDD. The great challenge of eradicating IDD remains in many developing countries, particularly in Asia, and Australian aid and health personnel are at the forefront of this effort.5

Over the past two decades we have had considerable experience working with AusAID (the Australian Agency for International Aid) and have been responsible for managing two international health projects: the "Australia–China Technical Cooperation Project on Iodine Deficiency Disorders", 1985–1991, and the "Iodine Deficiency Disorders Elimination Project in Tibet", which commenced in 2000 and will continue until the end of 2003. We will use our experience with these projects to provide some insights into funding issues for international health programs, particularly those associated with AusAID and the World Health Organization (WHO).

The goal of the Australian aid program is to advance Australia's interest by assisting developing countries to reduce poverty and achieve sustainable development. AusAID manages the Commonwealth Government's overseas aid program, focusing primarily on the Asia Pacific region. The total estimated overseas aid budget is $1.85 billion (0.25% of GDP) for this financial year, an increase of $90 million over last year.6 The key sectors of the program include health, education, infrastructure, rural development and governance. Gender (promoting equal opportunities for women and men as participants and beneficiaries of development), mental health and environmental protection are issues that apply to all sectors. The estimated expenditure breakdown by key sectors is shown in Box 2.6 Other budget highlights in health include the implementation of the $200 million bilateral and regional HIV/AIDS initiatives over six years, with $38.5 million for the year 2002–2003.

Projects and activities are usually delivered on a direct country-to-country basis, referred to as bilateral aid. Such projects are agreed with the recipient partner government, matching their priority needs with Australia's aid objectives and capacity to assist. Priority setting and selection processes are decided by high-level intergovernmental discussions. Australia also contributes on a multilateral basis to the activities of international development institutions, such as the development banks, the UN and Commonwealth and regional agencies, and numerous other organisations such as ICCIDD.6 Australian institutions and Australian expertise are frequently relied on to identify, design and implement health programs and projects funded by these multilateral mechanisms.6

AusAID contracts out most aid projects through a competitive selection process. There are as many as 13 Australian management contractors operating in the health sector alone, and these contractors are generally responsible for most of the initial project design and subsequent implementation.6 Thus, a significant proportion of the aid budget ends up being recycled in the Australian economy, purchasing equipment, goods and services for implementation overseas.

Headquartered in Geneva, WHO comprises six major regional offices and multiple subsidiary country offices throughout the world that coordinate regional and country programs. One of the great strengths of WHO is that it provides a global network of expertise through its highly specialised staff, complemented by a large number of international expert consultants.7 Since 1995, WHO has formed partnerships with the United Nations Children's Fund (UNICEF) and ICCIDD in the effort to eradicate IDD.8

Case study of Australian aid projects in China and Tibet

The original idea for an Australian-funded, cooperative IDD control project in the People's Republic of China was seeded in 1982, after collaboration and exchange visits between Australian and Chinese medical scientists committed to understanding and eradicating IDD. Several Australian exploratory visits to China, funded by Westmead Hospital, were undertaken between 1982 and 1984 in an attempt to develop a project to assist the Chinese with IDD control. This culminated in a formal request to the Australian Government from China for assistance in developing a national "Technical Cooperation Project" to address IDD. This is an example of a bilateral aid project initiated by an individual organisation rather than directly by a government. 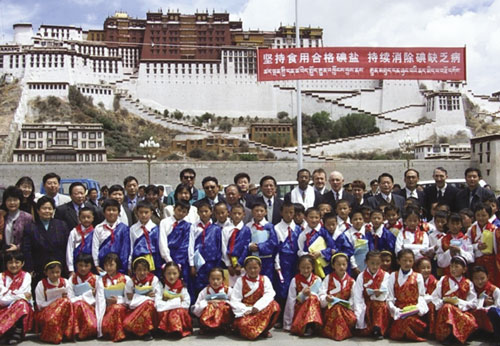 Commencing in 1985, a National Health and Medical Research Council (NHMRC) project, conducted by staff of Westmead Hospital in collaboration with Chinese scientists, was a catalyst for the development of the Australia–China Technical Cooperation Project. The research project provided invaluable background information for a subsequent feasibility study and ultimately a specific project development plan.9

The Memorandum of Understanding between China and Australia for the bilateral aid project, signed in Beijing in May 1986, marked the beginning of the project, the first external assistance provided to China to support its efforts to control and eliminate IDD. The importance of the findings and achievements of this project was that it contributed to the revision of the national health plan and raised the priority for IDD control. Ultimately, it prompted the government of China to seek international support from UNICEF, WHO and the World Bank for a National IDD Elimination Program.10,11 Thus, a small project with expenditure of about $2 million of Australian funds achieved an outstanding result in terms of changing national health policy and improving health outcomes.11

In 1997, the 2nd Biennial National IDD Surveillance Survey revealed that the elimination program had achieved significant progress in most provinces,12 with the exception of Tibet, which was lagging well behind the national target and timeframe for all control criteria. We were asked to assist with the development of a project, and WHO played an important part in the initiation of the project. In June 1998, a request for support was submitted to WHO by the Tibet Department of Health. WHO responded positively, stating it would fund the activities proposed for the first year (1999) if other agencies provided evidence of continued support of the project in 2000 and beyond. UNICEF and AusAID agreed in principle to support the proposal, and the Department of Disease Control in the Chinese Ministry of Health and the China National Salt Industry Corporation also made a commitment to participate and guaranteed resources for the project. WHO commissioned a Feasibility Study undertaken by a multidisciplinary team representing major stakeholders, and led by one of us (C J E). The team confirmed the magnitude and severity of the IDD problem in Tibet and further defined the support required in their report to WHO.13 At this stage, however, WHO revealed that it would not be able to support the project from its biennial budget and left the project in abeyance. By default, ACCIDD approached AusAID directly in Canberra, asking for financial support. AusAID commissioned ACCIDD, using its own resources, to develop the Project Design Document for a three-year project. 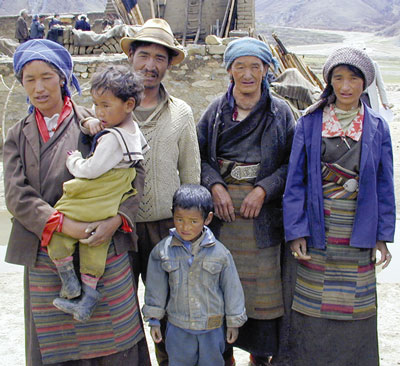 A Tibetan family of three generations affected by goitre and intellectual impairment due to iodine deficiency.

At this stage there was no guarantee of support and no financial assistance provided, except for the consultative assistance of an independent project design specialist. The interim Project Design Document was submitted to AusAID in February 2000, and in March 2000 AusAID announced support of $2 million for a three-year project. (This is not a very large amount of money — by comparison, the costs of atorvastatin and simvastatin, the two serum lipid-reducing agents provided through the Australian Pharmaceutical Benefits Scheme, in 1999–2000 alone amounted to $463 million dollars.2) With the $2 million we are able to support:

A Tibetan woman with a very large goitre caused by iodine deficiency.

The project is being delivered by a multilateral organisational arrangement, involving AusAID, the Chinese government coordinating agency (the Ministry of Foreign Trade and Economic Cooperation), and WHO. The Institute of Clinical Pathology and Medical Research at Westmead Hospital is responsible for project direction, technical support and external coordination under a Contractual Service Agreement with WHO. Now, two years into project implementation, significant achievements have been made. For example, IDD prevention, health promotion, and education programs have been developed and implemented throughout Tibet. The Lhasa Salt Iodisation Factory has doubled production of iodised salt. Eighteen professional personnel have been trained in Beijing, Hong Kong and Australia for health promotion, project management and laboratory management, and project infrastructures have been installed. Most importantly, about 75% of women of childbearing age and 60% of infants have received iodised oil supplements as part of the transitional strategy. The project is on time and on budget, but it is too early to assess the outcomes.

This case study illustrates that, in international public health, a small amount of money can produce an enormous benefit. In the independent Evaluation Report on the Effectiveness Review of Australian Development Cooperation with China, published in 1991, the Australia–China Technical Cooperation Project on IDD was rated the highest (9/10) of all aid projects in China over the preceding five years.14 The prevention of the mental and physical disabilities caused by IDD through iodine supplementation yields enormous social and economic benefits. Some of the economic benefits include:

Studies from Germany, Ecuador and India have shown the enormous cost benefit of salt iodisation programs.15

Take up the challenge!

We encourage Australian medical professionals to take up the challenge of improving health in the resource-poor countries of our region. It is important to focus on what Australian and individual expertise is available and where this can be applied to make a difference. Many medical professionals may already have been involved in overseas public health initiatives as subcontractors or consultants. If you have identified public health problems in which your intervention could make a difference, then do not wait for the government or the contractors to step in. Projects identified by government agencies may be funded with the intention of advancing some political agenda of the donor or the recipient countries rather than the true needs of the people. By identifying a project and seeking funding to support it, health professionals can ensure that expertise and resources are used for public good rather than political gain.

1: Life expectancy in selected countries in the Asia Pacific region2

We thank AusAID officers both in Canberra and Beijing, WHO WPRO staff in Manila and Beijing, ACCIDD personnel, health officials from the MOH China and our Tibetan colleagues for their support.