The morning after the night before: campfires revisited

We have reported an increased frequency of burns in children associated with campfires.1 More than 70% of these were caused by hot embers rather than flames, most occurring the morning after the campfire had been considered to be extinguished.1 These injuries result in significant post-burn scarring, which requires recurrent expensive treatment as the child grows. We were unable to find any evidence-based guidelines on the best method of extinguishing campfires.

Our objective was to measure the degree of heat retained in a standard campfire after extinguishing with either sand or water, or allowing the fire to burn out, to determine the optimal method of extinguishing a campfire.

On each of three days, three identical fires were built on a sand base, using equal quantities of ironbark logs and pine planks, to create a typical campfire. One fire on each occasion was the control. After burning for three hours, one of the test fires was extinguished with enough water to completely extinguish it (ie, no embers were visible) and the other was extinguished with enough sand to cover the fire (again no embers were visible). Maximum temperatures of all three fires were recorded (through a small hole in the sand for the fire extinguished with sand) using the Fluke 65 infrared thermometer (Carlton-Bates, Little Rock, Arkansas, USA), and a Raynger 3I thermal device (Raytec Corporation, Santa Cruz, California, USA) (maximum temperature, 500°C ± 2oC and 1200 ± 0.5%, respectively). Temperatures were recorded before extinguishing the fire, at 10 minutes, and at 1, 4, 8, and 12 hours (Box).

Each of the fires burned at greater than 510oC. Extinguishing with water resulted in a rapid drop in temperature, so that by 10 minutes the mean temperature of the fire was 47°C (range, 46°–50°C). This smouldering fire was easily recognisable as a recent fire. In contrast, in the fire extinguished with sand, after 10 minutes no smouldering was audible and no smoke was visible, but the mean temperature was 267°C (range, 226°–350°C). After 8 hours, the mean temperature was 91°C (range, 77°–118°C), sufficient to cause a full-thickness burn with contact of one second's duration. The temperature of the control fire remained at over 100°C after 12 hours. The differences in fire temperature after extinguishing with sand or water were statistically significant at the time intervals between 10 minutes and 8 hours inclusive (P < 0.05; Student's t-test).

The temperature required to cause a full-thickness burn in one second is 70°C.2 Hence, even after 8 hours, fires "extinguished" with sand retain sufficient heat to cause a full-thickness burn. Campers spend one million nights a year in Queensland national parks alone,3 and campfires are an integral part of the camping lifestyle. Fires, incompletely extinguished with sand, create an invisible hazard, particularly for children. The only safe way to extinguish a campfire is with water. 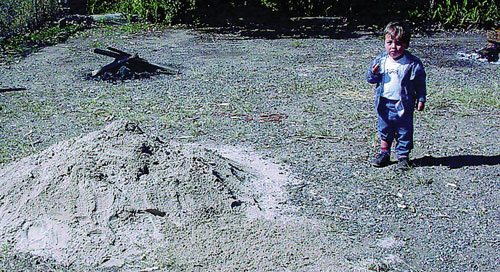