Setting: North Queensland local government areas of Cairns, Douglas, Mareeba and Atherton during January to May 1998.

Participants: General practice patients diagnosed with RRV disease on the basis of symptoms and a positive RRV IgM result.

Main outcome measures: Rheumatic symptoms and signs assessed as soon as possible after disease onset and on two subsequent occasions (up to 6.5 months after onset).

Results: 57 patients were recruited, 47 of whom were reviewed three times (at means of 1.1, 2.4 and 3.6 months after disease onset). Results are reported for these 47: 46 (98%) complained of joint pain at first review, with the ankles, wrists, fingers, knees and metacarpophalangeal joints (II–IV) most commonly involved. Prevalence of joint pain decreased progressively on second and third reviews, both overall (92% and 68% of patients, respectively), and in the five joints most commonly affected. The prevalence of other common rheumatic symptoms and signs, and use of non-steroidal anti-inflammatory drugs, also progressively declined over the three reviews.

Conclusions: Earlier studies may have overestimated the prevalence and duration of symptoms in RRV disease. Progressive resolution over 3–6 months appears usual.

An average of 5000 cases of Ross River virus (RRV) disease are notified each year in Australia.1 This disease presents typically with arthralgia and arthritis.2 Recent studies suggest that symptoms may persist for several years, with over half of patients surveyed complaining of joint pain 12 or more months after onset or diagnosis.3-5 However, these reports are inconsistent with earlier descriptions of RRV disease, possibly because of differences in methods or biases introduced by retrospective study designs.1

Until the natural history of RRV disease is understood, its public health importance cannot be determined, and clinicians will be unable to offer realistic prognoses to their patients. Therefore, we undertook a prospective, inception-cohort study of patients with RRV disease. This design is appropriate for describing the evolution of rheumatic manifestations of RRV disease.

Patients were recruited from general practices in the local government areas of Cairns, Douglas, Mareeba and Atherton in north Queensland during January to May 1998.

We notified all general practitioners in the area of the study by letter, visits (by D H) and a presentation at a continuing medical education session, and encouraged them to refer patients with acute RRV disease for inclusion in the study. In addition, Queensland Health's Tropical Public Health Unit and pathology laboratories in Cairns were asked to report patients with a positive RRV IgM test.

Patients were eligible for the study if they:

When possible, diagnosis was confirmed by IgG seroconversion. Some patients also had serological tests for Barmah Forest virus infection (which can cause a similar illness to RRV disease and false-positive IgM results) and dengue (which was epidemic in Cairns during the study period).1,6-9

The study was approved by the University of Queensland Medical Research and Cairns Base Hospital ethics committees.

A medical practitioner trained in rheumatological assessment (D H) reviewed all patients in their homes as soon as possible after disease onset and on two subsequent occasions.

Statistical analysis was performed using the computer program SPSS.11 For inferences on means and proportions, we used t and χ2 tests. Age and sex distribution were compared between study participants and all notified cases of RRV disease (data obtained from local pathology laboratories and the Tropical Public Health Unit) using a z test on a single mean and a χ2 goodness-of-fit test, respectively.

To evaluate the effect of time since onset on the risk of having more joints affected with pain (of the five most commonly involved), we used ordinal logistic regression with the number of joints affected as the outcome and time since diagnosis as the explanatory variable. To adjust for confounding, age and sex were included. The proportional odds assumption was tested using the likelihood ratio method.12 Because observations were repeated on individuals, a generalised estimating equation approach, with robust estimation of variances, was used to account for the correlated nature of the data using STATA.13

One hundred and twenty-nine patients were notified with a positive RRV IgM result within the study period and area, and 57 (44%) were recruited for the study. The most common reason for non-inclusion was lack of consent from either the patient or treating doctor. Ten patients refused follow-up reviews or were unable to be contacted, while 47 of the 57 were reviewed three times and constituted the inception cohort. Those reviewed three times were older, more likely to be women, tertiary educated and to work as professionals, managers or administrators than those reviewed once or twice, but none of these differences was statistically significant (Box 1).

The 47 participants in the study were from the local government areas of Cairns (34), Mareeba (10), Douglas (2) and Atherton (1). Age did not differ significantly between the 47 study participants and notified patients who were not included in the study (including the 10 reviewed once or twice only). Sex distribution also did not differ significantly.

Thirteen of the 47 cohort cases were confirmed by IgG seroconversion. Tests for Barmah Forest and dengue viruses were undertaken for 24 and 22 of the 47, respectively, all with negative results.

Prevalence of joint symptoms is shown in Box 2. Joint pain was the most common symptom at all three reviews (98%, 92% and 68% of patients, respectively), followed by joint stiffness, myalgia and joint swelling. Prevalence of each symptom decreased at successive reviews. However, at third review, joint pain was still present in seven of the eight participants with pre-existing joint disease (88%) and 25 of the 39 without (64%) (Yates' corrected χ2 = 0.77; P = 0.38). Joint pain most commonly involved ankle, wrist, knee, finger and metacarpophalangeal joints (Box 3), but decreased in prevalence over time at each of these joint types (Box 4).

Abnormal findings on physical examination at first review included joint effusion (2 patients), synovial thickening (3), joint swelling and heat (4), enthesopathy (2) and plantar fasciitis (1). Prevalence of abnormalities typically decreased at subsequent reviews. Prevalence of normal findings and grade I tenderness at different joints is shown in Box 2. Few participants had tenderness greater than grade I, with little change in prevalence throughout. At the final review, between 94% (ankle joints) and 100% (metacarpophalangeal, wrist, elbow, metatarsophalangeal and interphalangeal joints of toes) had normal findings and grade I tenderness.

The association between number of joint types with pain and time since disease onset was determined by ordinal logistic regression adjusted for age and sex (Box 5). Odds ratios for having pain in more joint types than within the first four weeks after onset decreased significantly with time (P < 0.001). The odds ratio associated with a change in the number of joints with pain per day since disease onset was 0.98 (95% CI, 0.97–0.99), and per fortnight was 0.72 (95% CI, 0.61–0.85). Consequently, there was a 2% decrease per day in the risk of having more joints with pain than at the first visit and a 28% decrease per fortnight.

Our results show that acute RRV disease is not a trivial illness, with most patients initially reporting joint pain. However, in contrast to some previous studies,3-5 we found that symptoms steadily resolved over three to six months.

Our study has the advantage of repeated clinical review by a single investigator and exclusion of other diagnoses, such as Barmah Forest virus infection and dengue. This, along with the high specificity of the tests for RRV IgM and IgG (96.5% and 97.6%, respectively14) (Dr Ming Qiao, Clinical Microbiologist, Institute of Medical and Veterinary Science, personal communication, 2001), make misdiagnosis unlikely. In earlier studies that have found more persistent symptoms,3-5 diagnoses are likely to have been almost entirely presumptive, without exclusion of other diagnoses.1 In such studies, up to 20% of cases may have been misdiagnosed.15

The major weaknesses of our study are its modest sample size and the absence of a control group. The latter prevents absolute quantification of the morbidity attributable to RRV disease, but data from other reports and population surveys allow some inferences. Arthralgia and arthritis are common in all populations. In Australia, 16.7% of GP encounters are for musculoskeletal complaints.16 In the United States, the prevalence of self-reported arthritis in 1997 was 16.1%,16 while in Spain 3.7% of patients in a general paediatric outpatient clinic presented with arthralgia.18 Consequently, joint pain due to causes other than RRV disease might account for some of the residual symptoms present in our cohort at final review.

Although we cannot exclude selection bias, we found that our cohort was representative of all notified patients in terms of age and sex. However, we cannot assume that notified patients who did not participate in the study had similar symptoms to participants. Nevertheless, biases in our study are likely to have been substantially less than those in retrospective studies that rely on self-reported symptoms.3-5

The course of rheumatic manifestations in RRV disease seen in our study differs from that in previous reports. It justifies GPs giving optimistic prognoses, as most patients are pain-free within three to six months of disease onset.

As RRV disease causes a well-defined syndrome2 and involves specific joints,1 it is inappropriate to ascribe symptoms that do not fit this syndrome to RRV disease. We recommend specific questioning and recording of pain in the most commonly affected joints (ankle, wrist, fingers, knee and metacarpophalangeal joints) as an index of disease activity. Alternative diagnoses should be considered for patients with symptoms that last longer than six months or without involvement of the commonly affected joints.

Detailed assessment of the overall economic impact of RRV is needed. Also, as the cost of serological testing for RRV is considerable,1 we need to know the sensitivity and specificity of clinical diagnosis. The yield and costs of different diagnostic strategies could then be determined.

1: Comparison between patients reviewed three times (study participants) and those reviewed once or twice

2: Frequency of joint symptoms and tenderness and use of anti-inflammatory drugs in 47 patients with Ross River virus disease 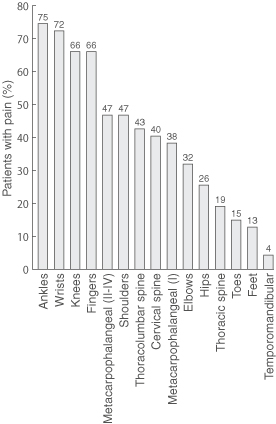 * First review was at 1–15 weeks after symptom onset. Patients were asked about pain in the preceding week.

4: Prevalence of pain at the most commonly affected joints over successive reviews* 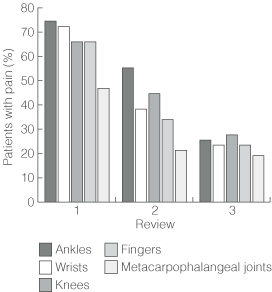 5: Odds ratios for having pain in more joint types (of the five most commonly involved) than in first 4 weeks after onset* 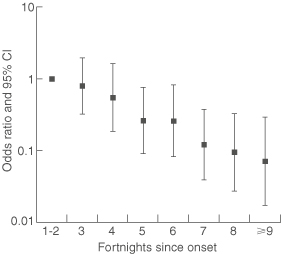 * Assessed by ordinal logistic regression and adjusted for age and sex.