Chronic lead poisoning may manifest clinically as abdominal pain, constipation, proteinuria, haematuria, peripheral neuropathy and muscle weakness.1 With more significant lead poisoning, encephalopathy may occur.2 Sustained blood lead levels of over 0.5 μmol/L in early childhood are likely to be associated with intellectual underperformance.3 However, congenital lead poisoning and its subsequent management has rarely been reported in preterm infants.

Treatment is with chelating agents, which reduce lead concentrations in the blood and tissues by forming water-soluble complexes that are cleared by the kidneys.4

We report a case in which the neonatal blood lead level was the highest recorded for a surviving infant.

A 24-year-old pregnant woman, who had recently emigrated from India, was found to have a haemoglobin level of 70 g/L at 24 weeks' gestation. At that time it was noted that she was a vegan and had a normal blood film and iron studies. At 30 weeks' gestation, she presented with abdominal pain and a progressive confusional state culminating in seizures. The blood film now showed basophilic stippling, a typical sign of lead poisoning (Box 1), and subsequent testing showed she had a blood lead concentration of 5.2 μmol/L (the National Health and Medical Research Council's public health goal is a level of ≤ 0.48 μmol/L).3

Chelating therapy was initiated with intramuscular dimercaprol and intravenous calcium disodium edetate (CaNa2EDTA).5 Thirty-six hours later the woman had an antepartum haemorrhage, and, after induction of labour, she gave birth to a 1.6 kg (75th percentile) female baby by vaginal delivery. Apgar scores were 4 and 6. The infant was flaccid and areflexic and did not move in response to noxious stimuli, although spontaneous ocular movements were present. As she had emerging alveolar hypoventilation and no gag reflex, she was intubated and ventilated. The clinical suspicion of bilateral diaphragmatic palsy was later confirmed by fluoroscopy.

Basophilic stippling was not seen on the infant's blood films, although Heinz bodies were present. Lead concentration in the cord blood was 7.6 μmol/L (12 hours before birth, maternal blood lead concentration had been 2.3 μmol/L). The concentration of erythrocyte porphyrins was 20.3 μmol/L (normal range, 0.4–1.7 μmol/L), and radiographs of the long bones showed an increase in the bone density adjacent to the metaphyses (both signs of lead poisoning).

Progress of infant after first 14 weeks. By three months' corrected age (ie, about 5 months after birth) the infant was able to fully feed by sucking, although there was significant gastroesophageal reflux. Her peripheral weakness had almost resolved, but bilateral wrist drop and poor head control persisted. Blood lead concentration had fallen to 1.8 μmol/L. It was decided to reintroduce oral succimer at 60 mg/kg/day. This appeared to be effective, as the lead levels not only fell in the blood but increased in the urine.

A brainstem auditory response at four months' corrected age showed right sensorineural deafness. (A magnetic resonance image of the brain at three weeks of age had been normal.) Throughout the hospital stay her serum calcium, zinc, iron, renal and liver function tests were normal.

Lead source identification. An environmental audit of the home and the local Sikh community kitchen revealed no obvious source of lead. Interviews conducted with the mother established that she had been taking several tablets, prescribed by an Ayurvedic doctor in India for treatment of a gastrointestinal complaint, periodically over the course of the past nine years. Analytical results for the various tablets are presented in Box 3, the most notable being the high lead content of two of the tablet types (4.5%–8.9% lead). The mother's tablet use in the nine months before the child's birth represented a lead intake of at least 50 times the average weekly lead intake of Western populations.2,8

Correspondence with the Ayurvedic doctor in India, who prescribed the brown ("HSY-15") tablets in this case, has not yet provided any clues as to the origin of the lead in these tablets.

The diagnosis of intrauterine lead intoxication was made on the basis of a maternal encephalopathy with a high blood lead concentration, maternal anaemia with basophilic stippling, and a high cord-blood lead concentration. Infant blood lead levels of a third to a half the peak level reported here are usually associated with severe cerebral oedema and death.2 In this instance, the infant was encephalopathic and profoundly weak and had diaphragmatic palsy at birth. The limb weakness clinically appeared to be predominantly neuropathic. Several electrophysiological attempts to clarify the presence of either a neuropathy or a myopathy failed owing to technical and interpretive difficulties. Although lead-induced peripheral neuropathy is well described,9 diaphragmatic palsy is unreported. There was no evidence of renal involvement or proteinuria, possibly due to the infant's renal immaturity. There was no basophilic stippling in any neonatal blood film. This relative paradox — the absence of basophilic stippling despite lead intoxication — has been noted previously.10 The unilateral sensorineural deafness is likely to be due to lead toxicity.11

Previous reports of congenital lead intoxication indicate that maternal and cord blood lead levels correlate.12 The marked discrepancy in this case (2.3 μmol/L [mother] v 7.6 μmol/L [cord]) could be due to the possibility that at high maternal blood lead concentrations the lead-binding capacity of the erythrocytes becomes saturated13 and more lead is available for transfer to the fetus. Alternatively, the discrepancy could be due to in-utero mobilisation of lead from fetal tissues without adequate maternal clearance. This latter consideration indicates a potential detrimental effect on the fetus of chelation therapy in pregnancy.

As chelating agents bind lead into complexes that are cleared by the kidneys, an increase in urinary lead concentration was expected after administration of each of the chelating agents. This phenomenon was consistently observed after courses of dimercaprol and CaNa2EDTA. However, variable doses of oral succimer during the preterm period did not lead to corresponding increases in urinary lead concentration, despite raising the dose to a level higher than those recommended in the literature.5-7 Only when oral succimer was recommenced at three months' corrected age did the predicted response occur. This apparent early ineffectiveness of succimer could be due to absorptive failure from the infant's immature gut. Furthermore, succimer is a prodrug that requires cysteine for activation.2 It is unclear whether or not this enzymatic activation process is mature in the premature infant.

While lead was the principal concern in this case, mercury was also detected in some of the tablets (Box 3). Weekly ingestion of one of the tablets containing 400 μg would exceed the Australian average weekly mercury intake by at least fourfold.8 Mercury poisoning was of secondary concern in the current circumstance, and chelation therapy was expected to remove the mercury along with the lead. This does, however, illustrate that herbal medicines may contain more than one potentially toxic component.

In many countries, including Australia, it is legal to import herbal remedies for personal use, although some restrictions apply.14 In addition, testing programs for contaminants in herbal remedies are virtually non-existent. Acute lead poisoning has been reported from traditional and herbal medicines and cosmetics obtained from India,15-17 the Middle East,18-19 Mexico20 and Asia.20-21 This should be a matter of grave concern to patients who take such remedies, and to health professionals and health authorities in these countries and in Australia. 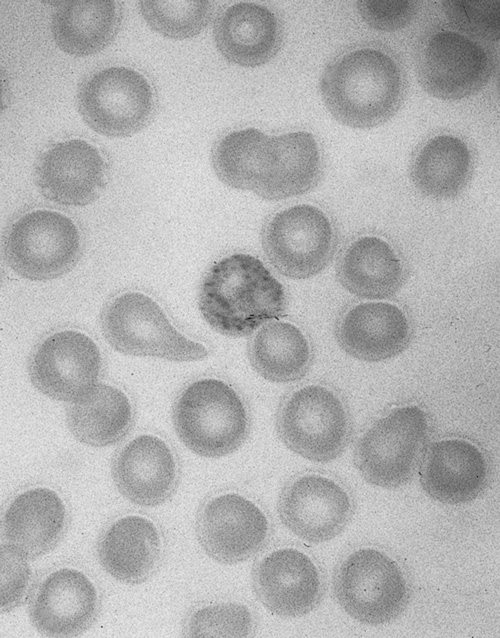 2: Infant blood and urinary lead concentrations from birth to 14 weeks of age* 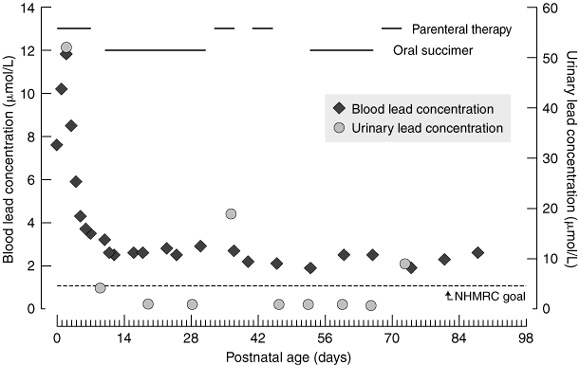 3: Metal analysis of tablets used by the patient*

The authors gratefully acknowledge Dr Stephen Rothenberg, of Charles Drew University, Los Angeles, for discussion of fetal and maternal blood lead levels; Mike Stevenson, of Berri/Barmera Council, for the environmental audit; Sam Mangas, for assistance with the source investigation; and Bill Dollman and Dr Brian Priestly, for discussions on the regulation of herbal remedies in Australia.