Setting and participants: The study was conducted from March 1999 to March 2000; 1000 patients, 63 pharmacists and 129 general practitioners from six Divisions of General Practice in South Australia participated.

Interventions: A collaborative service delivery model, involving a preliminary case conference, a home visit and a second case conference, was agreed through discussions with medical and pharmacy organisations and then implemented.

Results: Overall, 2764 problems were identified. The most common medication-related problem (17.5% of all problems) was the need for additional tests. Thirty-seven per cent of problems related to medicine selection, 20% to patient knowledge, and 17% to the medication regimen. Of 2764 actions recommended to resolve medication-related problems, 42% were implemented. Of the 978 problems for which action was taken and follow-up data were available, 81% were reported to be "resolved", "well managed" or "improving".

Conclusion: This implementation model was successful in engaging GPs and pharmacists and in assisting in the resolution of medication-related problems.

A substantial number of people experience medication-related problems.1,2 Australian studies1,3 have shown that closer collaboration between general practitioners and pharmacists, together with better medication review by pharmacists,2 can help to identify and resolve many of these problems.

In its 1999 Budget, the Federal Government allocated funding for the provision of Home Medication Reviews (HMRs). The Department of Health and Aged Care (now the Department of Health and Ageing) called for research proposals to establish a model for implementing these services.4 Our project aimed to design and test a collaborative model for delivering and evaluating HMRs. We report the results of an implementation trial in which we set out to determine the requirements for and outcomes of an area-wide HMR service.

A call for expressions of interest in participating in the project was sent to all Divisions of General Practice in South Australia. Eight of the 15 Divisions responded and six participated (three rural and three urban Divisions). A Divisional Liaison Officer (DLO) was employed in each Division to facilitate the interaction between GPs and pharmacists and to assist in the local implementation of the HMR service.

A collaborative service delivery model (Box 1) was agreed on, and standard forms for documenting relevant patient information, reports and action plans were developed in consultation with participating GPs and pharmacists.

DLOs used divisional newsletters and meetings with GPs to encourage participation. Pharmacists were invited to participate through a mailout. The DLO visited interested GPs and community pharmacists to discuss the proposed service, and provided support to GPs and pharmacists throughout the project. Local reference groups were established to help resolve issues that arose during implementation.

Each GP or pharmacist identified 5–10 eligible patients from their practices, based on patient selection criteria that had been previously used to identify patients at risk of having medication-related problems (Box 2). GPs were eligible for RACGP clinical audit points if 10 of their patients participated in the study.

For any patient identified by a community pharmacist, the pharmacist consulted the patient's GP to ensure the patient met eligibility criteria. Verbal consent for participation in the study was sought from each patient and recorded by the GP in the patient's case notes.

Once patients had agreed to participate, a brief case conference was held between the patient's GP and the community pharmacist. Relevant information was shared regarding the reason for referral, current medical conditions, prescribed medications and relevant laboratory results.

Two researchers coded the medical conditions, medications taken and medication-related problems from patient case notes. Medical conditions were categorised according to the International classification of diseases (ICD-9-CM),6 medications according to the Anatomical and therapeutic classification7 and medication-related problems according to previously employed criteria (Box 3).1,3,8 From patient case notes, the researchers noted actions taken to address the problems (Box 4) and outcomes of those actions (Box 5). For some patients, the GP and pharmacist identified more than one problem.

A total of 129 GPs and 63 pharmacists (representing 17% of GPs and 30% of pharmacists in the six Divisions of General Practice) participated in the trial. The target of 1000 patients was achieved.

Pharmacists identified 2764 medication-related problems, the most common (17.5%) being the need for additional tests (Box 3). On average, 2.5 problems were identified per person.

Thirty-seven per cent of all problems related to medicine selection, 20% to patient knowledge and skills, and 17% to the medication regimen. Only 1% of problems related to drug–drug interactions, 2% to contraindicated therapy, 2% to the use of medicine without indication, and 1% to duplication of therapy.

In response to the identified problems, pharmacists recommended 2764 actions to GPs, of which 1163 (42%) were documented in patient case notes as having been implemented. No information was available on implementation of the remaining actions. This may mean that no action was taken, that the action was rejected by the GP, that follow-up had not occurred at the time of the study's completion, or that the action had been previously trialled, was still under consideration or was implemented but poorly documented. The types of actions most commonly implemented included changes to medicine selection; changes to the dose, frequency or duration of therapy; and patient education (Box 4).

The model required GPs and pharmacists to negotiate actions based on the pharmacist's report. In 23 instances the GP refused to implement the action(s); in 31 instances, although the GP and pharmacist agreed on the action, the patient refused.

Our study showed that a collaborative medication management service could be successfully implemented through Divisions of General Practice and was acceptable to all participants. The process employed enabled GPs and pharmacists to identify people at risk of medication misadventure and to resolve many of their medication-related problems.

Problems relating to medication use were common. Importantly, outcome data reveal that the service resulted in 81% of problems being resolved, well managed or improving at follow-up. Although the study was restricted to South Australia, the inclusion of both rural and urban Divisions improves the generalisability of the findings.

The nature and extent of medication-related problems, particularly in older at-risk people, has been well described.1,3,8 The establishment of professional relationships between GPs and pharmacists, achieved through the participatory action research approach in our study, was an important element in the success of the project.

Importantly, our model is compatible with the Enhanced Primary Care package,9 which includes case conferencing as a rebatable item.

There are many opportunities for collaboration between GPs and pharmacists to improve health outcomes for consumers. People at high risk of medication misadventure include those living in residential aged-care facilities, those with chronic illnesses (eg, mental health problems, asthma, diabetes, cardiovascular disease), and those returning home after a stay in hospital.

Based on the evidence presented in this project, the HMR service, which is currently being implemented nationally,4 has the potential to improve the overall management of medicines in the community and significantly improve health outcomes for consumers in Australia. 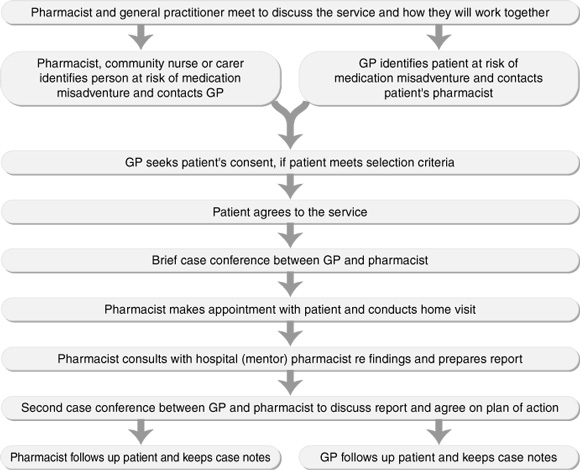 Patients included those who were

Our study was supported by funding from the 2nd Pharmacy/Government Agreement administered through the Commonwealth Department of Health and Aged Care.