In cases of multiple impalement injury, the extent of damage to the body can be underestimated.

A 26-year-old man sustained a fivefold impalement injury after falling three metres onto metal reinforcement rods. When the emergency medical services arrived at the scene, the patient was in severe distress, pale with clammy and moist skin, increased respiratory and heart rate and tenderness in the lower abdomen. Motor and sensory responses were normal. The emergency physician would not permit the steel rods to be cut until adequate fluid resuscitation (lactated Ringer's solution 1500 mL and hydroxyethylstarch 1000 mL) and analgesia (ketamine hydrochloride 50 mg) were established.

During the extrication process, the patient was covered with a blanket and supported from the back (Figure A). Within 53 minutes of the fall, the patient was admitted to the emergency department. Abdominal x-ray indicated that two rods had entered the abdominal cavity (Figure B). Surgical investigation revealed, in addition to laceration of the right femoral artery, major trauma to the abdomen (perforated rectum, jejunum and duodenum, incomplete rupture of the spleen, and injury to the head of the pancreas). The patient recovered from severe infection of the abdominal cavity with concomitant septicaemia, and was discharged from hospital three months later.

Multiple impalement is a potentially life-threatening injury that requires perfect cooperation between technical and medical personnel on the scene.1-3 Stabilisation of vital functions, analgesia, and extrication must be performed simultaneously. On-site emergency management must be judged on an individual basis. The question arises whether a scoop-and-run policy — with presumably shorter prehospital treatment time — is justified. In cases involving prolonged rescue, manipulation, or even removal, of the impaling objects has been reported as an exception to the general rule that an impaling object should remain in situ while the patient is transported to an operating theatre.4,5

In our patient, removal of the impaling objects was especially tempting, as successful compression of bleeding vessels from outside the body was anticipated. However, intra-abdominal injury was clearly underestimated at the scene. Major injuries to the upper abdomen by protruding rods were not clinically suspected before operation. This shows that the entry site does not necessarily reveal the extent of damage to the body. 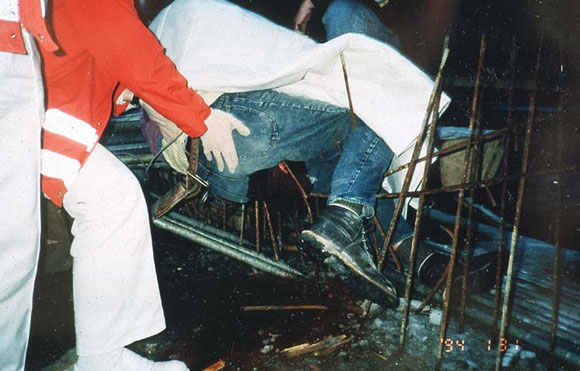 A: The patient was supported from behind while the penetrating rods were cut. 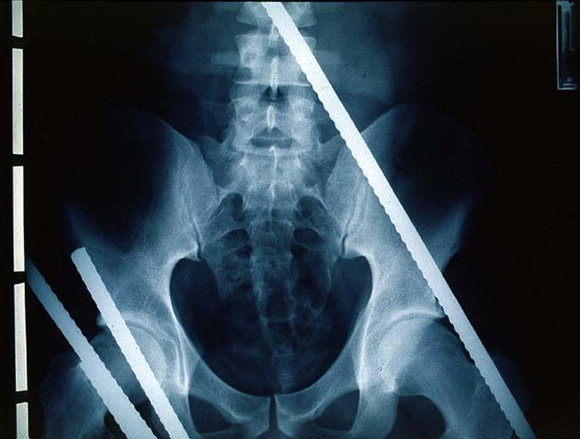 B: Rods were found to have penetrated the abdomen. This was not suspected until the patient had reached the hospital.