Diagnostic laboratories are increasingly seen as no more than "factories" that generate fast, reliable test results. The dangers of complacency about the use of tests are highlighted by recent cases of unnecessary surgery and chemotherapy based solely on false-positive test results. There are many causes of misleading laboratory data that can potentially lead to clinical mismanagement. Re-emphasis of the value of patient-relevant communication between the requesting doctor and the laboratory, and better undergraduate and postgraduate education about the appropriate use of tests, will help reduce the risks of test results leading to harm.

Pathology laboratories have achieved significant improvements in the timely provision and quality of diagnostic tests. Automation, commercially produced reagents and computing are providing clinicians with an ever-increasing menu of rapid, cost-effective tests. Operational advances in pathology have occurred in consort with analytical developments that measure many types of molecule with specificity and in ever-decreasing amounts, revolutionising the routine assay of many molecules of clinical diagnostic value. Coupled with this progress, pathology services in Australia meet stringent technical, management and quality-assurance standards to hold government accreditation for pathology testing.

The downside of this image is the potential for complacency and a sense of false security among both pathology providers and users. A recent stark example of the dangers involved is that of a 22-year-old woman who underwent needless surgery and chemotherapy on the basis of more than 40 false-positive quantitative human chorionic gonadotropin (hCG) test results (Box 1).1 The then Chief of Obstetrics and Gynaecology at the medical centre involved said, "When you're managing the patient, using a test you've used for years and years, you just don't question the test, especially given the patient's course."1 This absolute trust in laboratory tests is apparently not unique — in the United States alone, 43 similar cases have been reported to date.2 Similar hCG assays are used worldwide, so other such cases may emerge, while the number of misdiagnosed ectopic pregnancies based on false-positive hCG results is unknown.

In the above cases, hCG was measured by sandwich immunoassay, using two specific monoclonal antibodies. When the target protein is present, a link can be formed between the capture and signal monoclonal antibodies, generating a measuring signal (Box 1). Because of its high specificity and sensitivity, this assay design is used widely for the measurement of peptide and non-peptide hormones, specific proteins and drugs.

Immunoassay kits contain additives to minimise such antibody interference, but false-positive and false-negative results still occur in patients whose heterophilic antibody levels overcome these measures. Recent reports include one patient who underwent an unnecessary angiogram on the basis of false-positive troponin T results,4 and others who were incorrectly diagnosed with myocardial infarction after false-positive troponin I results.5,6

Another form of incorrect result can arise if the laboratory provides inadequate test information to clinical users; this has the potential to initiate inappropriate clinical decisions. For example, hCG assays, in addition to pregnancy applications, are used for detecting and monitoring hCG-secreting tumours. These tumours can secrete hCG variants that are undetectable by some assays. If an inappropriate assay is used for patients with hCG-secreting tumours, falsely low or negative results may be reported.9 There is therefore the potential for serious clinical mismanagement if laboratories are unaware, or fail to inform doctors, of the known diagnostic applications and limitations of their "hCG" assays.

A further example is haemoglobin A1c (HbA1c). The American Diabetes Association recommends that the goal for good glycaemic control is an HbA1c < 7%, with additional treatment required if HbA1c > 8%.10 Analytical separation of this difference in a patient requires the assay to have an imprecision of < 3%. Currently, only about a quarter of nearly 200 laboratories offering HbA1c testing in Australia can achieve this. The proportion of doctors aware of whether the HbA1c test they use is adequate for their clinical purpose is unknown.

What lessons can be learned, or relearned? In the US hCG case, a professional relationship between the clinical users and their laboratories did not appear to exist. In practice, it is unreasonable to expect doctors to seek out and keep abreast of the limitations of all the pathology tests they might use. Equally, it would be counterproductive for laboratories to flood requesting doctors with information about all test problems. Most laboratories do provide at least basic test information in the traditional handbook format, but this is often not available at the moment of need, and is not patient specific.

Despite changing laboratory practices, communication between clinical users and pathology laboratories continues to be by the test request and the report, be it paper or electronic. Thoughtfully used, these avenues can efficiently provide patient-focused information at the moment of need. However, their value in enhancing patient care, and minimising harm, needs renewed emphasis. There is much anecdotal evidence that use of the "clinical note" on request forms is waning. Without at least a brief indication from the requesting doctor of the clinical reason or expectation for the tests, the laboratory has little chance of checking results for "clinical fit", or value-adding with further relevant information. On the laboratory side, there needs to be a greatly improved use of the clinical note and the patient report to convey patient-specific test information and caveats, without creating visual indigestion. For the long term, there needs to be emphasis given in pathology teaching to the effective and appropriate use of laboratory tests in patient care, at both the undergraduate and postgraduate level.

Working together through improved patient-oriented communication, doctors and their laboratory colleagues create the opportunity to maximise the contribution pathology tests can make to safe, effective patient care.

An otherwise healthy 22-year-old woman in the US consulted her local doctor because of irregular bleeding. Serum quantitative β-human chorionic gonadotropin (βhCG) tests were positive (250–350 mIU/L; reference range, <5 mIU/L), but ultrasound examinations did not detect a fetus. The woman was referred to an oncologist for investigation of a possible trophoblastic tumour.

Imaging did not reveal evidence of a tumour, but, in view of the continuing raised βhCG results, the patient was diagnosed with an occult trophoblastic tumour and commenced on chemotherapy. After many months of aggressive chemotherapy, the βhCG results remained at 250–350 mIU/L. The patient underwent a hysterectomy, but the tissue histology was unremarkable. The βhCG values declined postoperatively, but returned to previous levels. Subsequently, two suspicious spots on a lung scan resulted in a partial right lung resection; again the tissue histology was unremarkable.

Clinical review concluded that the patient did not have cancer and that the misdiagnosis was based on more than 40 false-positive βhCG results. The patient sued and was awarded US$32m compensation from the medical centre and the diagnostic kit manufacturer.1 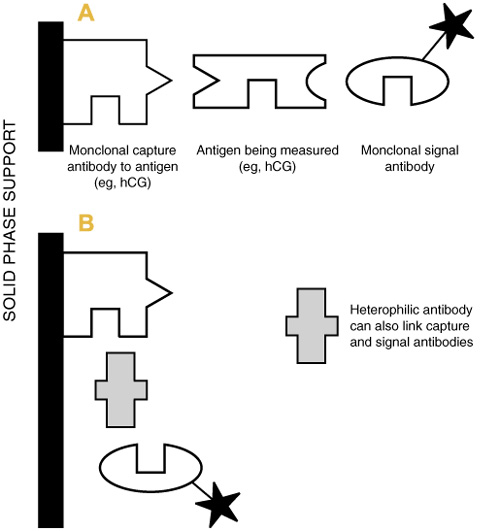