Lingual arteritis in an elderly woman

An 86-year-old woman presented initially with pain on swallowing and tongue ulceration. While awaiting an appointment with an ear nose and throat surgeon, she developed tongue infarction, with associated mild frontal headache and blurred vision. She was then referred to a consultant physician, with symptoms of severe dysphagia, weight loss and dehydration.

Examination revealed that she was afebrile, cachectic, and dehydrated, with a blood pressure of 110/70 mmHg and a pulse rate of 88 beats/min. Her tongue was ulcerated, and the anterior third was black with grey-white slough (Box 1). She had wasting and moderate abduction weakness in the shoulder girdle (power 3/5), but her reflexes were intact and she had no sensory loss. Her temporal arteries were palpable and tender, without pulsations. Right-eye acuity was 6/60 (unchanged from a previous assessment). Left-eye acuity was reduced to finger counting. Funduscopy, after dilation, revealed an old right retinal artery occlusion and a recent left retinal artery occlusion.

In light of the severity of the disease, the patient was given intravenous hydrocortisone (100 mg, 6 hourly, for 5 days), then oral prednisolone 75 mg daily. Enteral feeding, subcutaneous morphine, xylocaine mouthwashes and prophylactic antibiotics were instituted.

On discharge at one month, acuity of both her right and left eye was 6/60. Her tongue had healed, but 10% of the tongue mass had been lost. Her shoulder-girdle weakness had improved, and her ESR was 35 mm/h (taking 20 mg prednisolone). Over the next four years, numerous attempts to withdraw prednisolone failed, and each relapse responded to steroid increase. Recurrent headache, lethargy, tongue ulceration and pain on swallowing occurred with relapses, with concomitant elevations in her ESR (Box 3). At 42 months from diagnosis, she was asymptomatic taking 5 mg prednisolone.

Lingual infarction is an atypical manifestation of temporal arteritis, with fewer than 30 cases reported since 1966.1 Temporal arteritis causes inflammation of medium- to large-sized arteries, particularly branches of the carotid artery. It occurs predominantly in white women over 55 years old and is associated with polymyalgia rheumatica. The two conditions are considered to be part of the spectrum of the one vasculitic disorder.2

Diagnosis of temporal arteritis is a clinical challenge given that atypical presentations occur in up to 40% of patients. Furthermore, there are differing opinions about treatment.2 Its incidence in the over-50 age group is 22.2 per 100 000.3 Given the ageing population in Australia, the spectrum of presentation of temporal arteritis warrants renewed discussion and awareness.

Classically, temporal arteritis presents as a recent-onset headache with scalp tenderness over the temporal arteries.2 The headache can be mild to severe.2 In a meta-analysis of patients with biopsy-positive temporal arteritis, jaw claudication was the most specific symptom, but was present in only 34% of patients.3 Tongue sensations, such as burning or sudden increases in size and/or necrosis of part of the tongue, have been reported in 25% of patients.1 Paroxysmal blanching on eating may herald tongue infarction. Symptoms of tongue claudication, such as jaw or tongue pain on chewing, and pain on swallowing, can be misdiagnosed as temporomandibular dysfunction or dental problems,2 and may also herald critical stenoses secondary to atherosclerotic disease of the carotid artery. Facial paresis, acoustico-vestibular symptoms and amaurosis fugax (a transient episode of monocular or partial blindness) can be associated with lingual infarction and, as in our patient, features of polymyalgia rheumatica may also be present.1 These include pain, tenderness, wasting and weakness in the shoulder girdle, with systemic features of anorexia, weight loss and fever.2

Recognition and early treatment can prevent complications. In our patient, the lack of recognition of the cause of her tongue symptoms led to diagnostic delay: three weeks elapsed while she waited for review by an ENT surgeon to exclude malignancy and infective causes, during which time lingual and retinal infarction occurred. Complications of visual loss occur in 15%–20% of untreated cases4 and can be abrupt or progress over days.4 Prompt steroid treatment is required and referral for temporal artery biopsy. In a series from the Mayo Clinic, only 1% of patients treated with steroids developed new visual loss over five years.3 The search for new, less invasive diagnostic tools is ongoing. Ultrasound can be reliable, but is highly operator dependent.2 Magnetic resonance imaging is used for assessment of larger-vessel involvement, and the usefulness of positron emission tomography is being explored.2

Temporal artery biopsy is positive in 60%–80% of patients with temporal arteritis.3 As vasculitis is patchy, small biopsies may miss active disease; bilateral segments more than 2 cm long are preferred. The characteristic histological appearance persists for days after commencement of prednisolone; thus, delays in treatment should not occur if clinical suspicion is high.5 An erythrocyte sedimentation rate (ESR) over 50 mm/h increases clinical suspicion, while a normal ESR significantly reduces the possibility of temporal arteritis.3 The following features (from a meta-analysis) increase the likelihood of a positive biopsy result: acute onset of symptoms (mean, 3.5 months); jaw claudication; diplopia (present in 9%); beaded, prominent temporal arteries; and an ESR over 100 mm/h.3

Because of the wide spectrum of presenting symptoms, many specialist groups treat this condition, including rheumatologists, ophthalmologists, neurologists, general physicians and general practitioners. This can result in a wide range of therapeutic regimens, depending on the predominant symptoms.

Initiation of steroids is imperative to avoid visual loss. Standard therapy is oral prednisolone 50–75 mg/day initially.2 Intravenous steroids have been used when visual loss has occurred within 24 hours and is severe, although no randomised controlled trials of the value of intravenous steroids have been performed. Most patients respond quickly to high dose oral therapy and maintenance therapy for 12 to 24 months.2 The median duration of treatment is 1.8 years;2 however, relapses occur, and further treatment may be required for several years. Long-term prednisolone is associated with complications (eg, osteoporosis, infections, and peptic ulcer disease), especially in the elderly, and careful monitoring is required. Studies of combination therapy with steroid-sparing agents, such as methotrexate, have been commenced, but further research is needed.2

1: An 86-year-old woman with tongue infarction 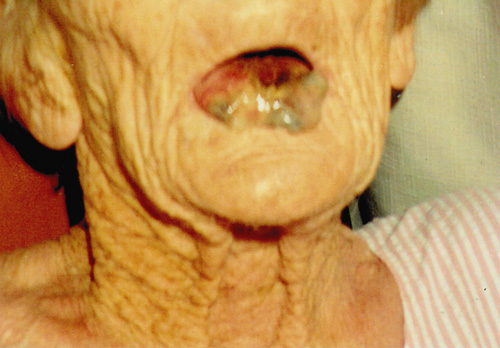 2: Biopsy of the temporal artery 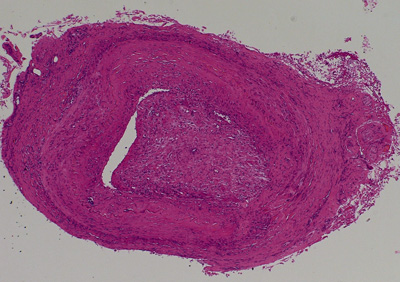 3: Response to treatment over time in a woman with temporal arteritis — erythrocyte sedimentation rate (ESR) and prednisolone dose 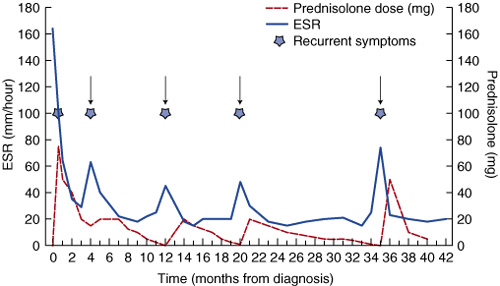 We would like to thank Professor John Dowling (Pathologist, Alfred Hospital) and Mr Aldo Anile (Pathology Manager, Melbourne Pathology) for assistance in obtaining images of the pathology specimens.