Deep brain stimulation of the subthalamic nucleus in Parkinson's disease

Objective: To evaluate the effects of bilateral deep brain stimulation in the subthalamic nucleus for symptomatic relief of advanced idiopathic Parkinson's disease.

Subjects: 14 patients with Parkinson's disease with intact cognition and difficult to manage motor symptoms who were referred to Kingston Centre between 1996 and 2000 and were eligible for surgical intervention.

Interventions: All patients were assessed both after 12 hours' withdrawal from and while taking their levodopa medication on two occasions before surgery. Further assessments were carried out one, three, six and 12 months after surgery.

Results: Stimulators were explanted in one patient after intracranial haemorrhage and relocated to the thalamus in a second. Extraneous factors prevented two patients from attending at six-month follow-up. Motor performance improved significantly with stimulation alone in the 10 remaining patients. Further significant gains were seen with stimulation and medication combined, with an apparent reduction in side-effects such as dyskinesia.

Functional neurosurgery, and particularly neurostimulation, has assumed increasing significance in the management of Parkinson's disease over the past five years. Although surgical destruction of small areas of brain tissue (lesioning), for example in the thalamus for control of tremor, has been performed for decades,1 deep brain stimulation is more recent.2 Functionally, deep brain stimulation mimics lesioning, but with benefits that include lack of tissue damage and flexible treatment levels. The ability to adjust the electrical input enables flexible symptom management as the disease progresses. Various sites may be chosen, either for destructive lesioning or for deep brain stimulation. The thalamus is the site of choice for tremor control and the pallidum provides relief of dyskinesias.3,4 The subthalamic nucleus is used primarily for management of hypokinesia, but may also minimise dyskinesias, as medication levels can consequently be reduced.

This is the first reported Australian experience of bilateral deep brain stimulation of the subthalamic nucleus in a group of patients with advanced Parkinson's disease and refractory motor fluctuations.

Participants were all patients referred to us between 1996 and 2000 and considered for surgery who met the following criteria: idiopathic Parkinson's disease with no significant comorbidities; age less than 75 years; intact cognition with no psychotic side effects to medication or past psychiatric history; a good motor response to levodopa medication; and refractory motor fluctuations. All participants were prospectively assessed and then followed up for 12 months after surgery.

Before surgery, patients were admitted for two weeks to a facility staffed by personnel trained in managing movement disorders. No alterations to medications were made. Preoperative assessments included hourly monitoring of mobility, dyskinesias and tremor.

All physical assessments by members of the multidisciplinary team were performed both with (on) and without (off) levodopa medication. Psychiatric evaluation and formal neuropsychometric testing were also undertaken. A more formal testing protocol (undertaken on and off medication on two separate occasions) included the Unified Parkinson's Disease Rating Scale (UPDRS),5 in which lower scores denote less disability. Spatiotemporal gait parameters were analysed with a stride analyser (B&L Engineering; Tustin, CA, USA). The Purdue Pegboard test6 was used to confirm changes in upper-limb hypokinesia seen in the UPDRS subscores. Dyskinesias were evaluated by a dyskinesia rating scale.7 Patients were videotaped during the motor component of the UPDRS rating scale.

The experimental protocol was approved by the ethics committees of both The Royal Melbourne Hospital and Kingston Centre. Patients provided separate informed consent to the surgery and the testing procedure.

All surgical procedures were performed at The Royal Melbourne Hospital. Box 1 shows the positioning of the electrodes.

Patients returned from the acute hospital to the Movement Disorders Unit at Kingston Centre for adjustment of stimulation parameters (such as choice of electrodes, current and voltage) while taking the same medications as they had preoperatively. Medications were then titrated as required. Hourly evaluation of mobility by nursing staff by means of the quickly administered Timed Up and Go test10 and dyskinesia scores7 enabled optimal titration to be achieved over the next two to four weeks. After discharge, patients were formally tested at one, three, six and 12 months. Motor performance was evaluated as in four different conditions: (i) 12 hours after withdrawal of medication with stimulators off, (ii) stimulation only, (iii) medication only, and (iv) combined treatment. Testing commenced early morning and proceeded as described under Assessment Procedure. Neither assessor nor patient was blinded to the test condition.

Fourteen patients (nine men) underwent bilateral electrode implantation into the subthalamic nucleus. Their median age was 59 years (range, 36–74 years) and median disease duration was 13 years (range, 3–33 years). Median presurgical disability on the motor exam component of the UPDRS5 was 28 (range, 8–55) without medication and decreased to a median of 13 (range, 2–25) with medication (Box 2).

After surgery, stimulator leads were explanted in one patient (Patient 12) and relocated to the thalamus in a second (Patient 13; Box 3). Patients 11 and 14 did not attend the six-month evaluation because of extraneous factors, leaving follow-up data for 10 patients. Despite considerable variation between patients, motor exam results showed that motor performance with no treatment was significantly worse at six months after surgery (Box 4a; t(9)  = 2.343; P = 0.044) and medication effectiveness tended to diminish over the same period. At six months, stimulation alone was as effective at improving motor performance (t(9) = 5.952; P < 0.001) as medication (t(9) = 4.035; P = 0.003), and combining stimulation and medication further reduced motor difficulties (t(9) = 4.291; P = 0.002). Motor performance improved despite overall reduced levels of medication (Box 5), and was thus accompanied by fewer levodopa side effects such as dyskinesias. This effect did not reach significance owing to several subjects without presenting dyskinesia.

Various UPDRS subscores were examined more closely. Patients with hand hypokinesia (the sum of UPDRS items 23–25; Box 4b), rigidity (Box 4c) and tremor (the sum of postural and resting tremor; Box 4d) benefited significantly more from the combination of stimulation and medication than from medication alone.

Although difficulties presented by short therapeutic windows and advanced disease meant that some patients were unable to provide complete sets of data for stride analysis at six months (Patients 3, 4 and 5), significant benefit from stimulation in gait velocity and stride length was evident for the remaining patients. Both stride length, the primary deficit in Parkinson's disease gait,11 and velocity improved with stimulation or medication, with further significant gains using combined treatment (Box 4e and 4f; stride length, t(6) = –3.175; P = 0.019, and velocity, t(6) = –3.625; P = 0.011). Other parameters, such as cadence and postural stability, did not change significantly.

The positive changes described above occurred against a background of general reduction in drug use. The equivalent levodopa dosage was calculated for all the drugs by an approximate conversion process (1 mg of pergolide or 10 mg of bromocriptine equivalent to 100 mg levodopa, and 10 mg of selegeline equivalent to a 10% increase in levodopa dose).12 The mean preoperative levodopa equivalent for the 12 patients with stimulators in situ was 1417 mg/day (range, 400–3500 mg/day), reducing after surgery to 998 mg/day (range, 300–2280 mg/day) at their last assessment (Box 5); this represents a mean reduction of 30%.

This study demonstrated the benefits of deep brain stimulation of the subthalamic nucleus for people with Parkinson's disease and difficult to manage motor fluctuations. There was improvement in almost all areas of motor function, associated with a medication-sparing effect that consequently reduced dyskinesias (although this effect did not achieve significance).

Our results compare favourably with previous reports of deep brain stimulation of the subthalamic nucleus.13-17 UPDRS motor performance scores in our study improved markedly, with particular improvement while taking medication. Reduction in medication was lower in our study (30%) than in others, where 50% has been reported.18-20 This may be related to the apparent increase in underlying disease severity observed in our patients when receiving neither medication nor stimulation. No patient in our study was able to stop taking medication.19,21

The significant benefits we found of stimulation while taking medication have rarely been reported. There were, however, a number of factors that influenced UPDRS motor scores under each condition. Firstly, variable rates of drug metabolism meant patients were not always at their worst 12 hours after withdrawal of medication. Secondly, optimal motor response did not always occur after a single dose of medication following 12 hours' abstinence. A third complicating factor was the short therapeutic effect seen in some patients on some occasions, causing the effect of medication to wear off before testing on medication was completed. Finally, country and interstate patients were tested before any necessary changes in medication or stimulator parameters were made, and were not necessarily at their optimum during testing. Although not previously reported, these difficulties appear inevitable given the advanced disease of most participants. However, such testing difficulties are likely to have adversely influenced the benefits of surgery by "improving" scores when patients were unmedicated and "worsening" scores when they were medicated.

There was marked variability in response to deep brain stimulation among our patients. Although some of this resulted from the difficulties noted above, further variability may have related either to the stimulators themselves or their positioning. Electrode positioning may have been suboptimal, as we did not have single-cell recording equipment to pinpoint subthalamic cells. The quadripolar electrodes used have a larger interelectrode distance than those used elsewhere. By allowing better localisation of the deep brain stimulation effect, closer electrode spacing may reduce overflow to proximal structures, enabling better symptom control without side-effects. These differences, combined with an older sample size, may explain why medication reductions were smaller and parameters such as gait improved less in our study than in some others.19,21 Our failure to show improved postural stability with stimulation is not unexpected given its failure to improve with levodopa medication.22

The rate of minor complications in our study was high, although complications due to stimulation alone were minor and reversible. The most serious complication, frontal haemorrhage, left the patient with significant cognitive sequelae, necessitating supervised care. Similar complication rates have been reported by other groups.18-20

The results of this study confirm that deep brain stimulation of the subthalamic nucleus can provide improvement in hypokinesia with reduction of dyskinesia by a medication-sparing effect. Overall, our results are promising, but suggest the need to improve accuracy and reduce side effects if this approach is to become an acceptable and more widely used form of management of endstage Parkinson's disease. 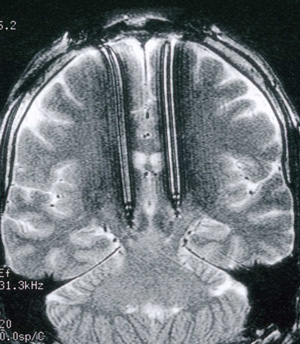 Electrodes inserted under local anaesthesia after physiological localisation of subthalamic nuclei and optimal motor response while patients were not taking medication. Pulse generators were subsequently implanted in chest wall and connected under general anaesthesia.8,9

4: Changes in selected parameters before and six months after electrode implantation

5: Comparison of medication levels before surgery and when last assessed for all patients with implanted subthalamic electrodes 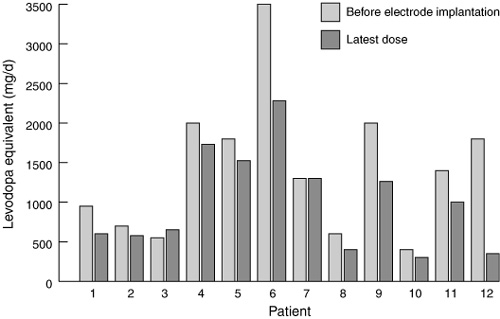