Objective: To compare the rate of provision of longer consultations per head of population across practice locations categorised by socioeconomic status.

Design: Retrospective analysis of Medicare data for all consultations for all general practitioners in Australia for the 1998–99 and 1999–2000 financial years, grouped by postcode of practice location. Postcodes were categorised by the Socio-Economic Indexes for Areas, Index of Relative Socio-Economic Disadvantage score.

Main outcome measures: Number of consultations and number of brief, standard, long and prolonged consultations per capita in each postcode grouping.

Results: The absolute number of long plus prolonged consultations showed no trend across postcode groups, but the rate ratio per person was significantly higher in more advantaged postcode areas. This represents an example of care provision in inverse relationship to need.

Our aim in this study was to examine the rate of provision of longer consultations among practices categorised by the socioeconomic status of the practice billing location.

Summarised Medicare claims data were obtained from the General Practice Branch of the Commonwealth Department of Health and Ageing for the financial years 1998–99 and 1999–2000. The data included numbers of all non-referred consultations for all general practitioners and other non-vocationally registered, non-specialist medical practitioners in Australia, grouped by time and complexity type (short, standard, long, prolonged, as described in the Medical Benefits Schedule10). Specialists were excluded. Data for each general practitioner were allocated to the postcode of his or her billing practice location, or to the relevant postcode for GPs who consulted over a number of postcodes. For analysis, short and standard consultations were grouped, as were long and prolonged consultations.

Socio-Economic Indexes for Areas, Index of Relative Socio-Economic Disadvantage (SEIFA IRSD) scores for each postcode, obtained from the HealthWIZ database, were then used to group postcodes into quantiles of relative disadvantage.11,12 Postcodes were grouped on the basis of about equal numbers of postcodes rather than about equal population. Eleven groups (–5 [most disadvantaged] to +5 [most advantaged]) were used, consistent with the categories reported in HealthWIZ. Data for practice locations in each postcode quantile were added to give total numbers of consultation type for each quantile of relative socioeconomic disadvantage.

Population estimates for postcodes for the same periods were obtained from the Australian Bureau of Statistics.13

Data for each collection year were analysed separately.

Data on the percentage of consultations that were direct (or bulk) billed across the SEIFA categories were obtained from HealthWIZ for the financial years 1997–98 and 1998–99, being the latest available for SEIFA categories.

Poisson regression was used to calculate the rate ratio for the rate of longer consultations per person across the 11 SEIFA postcode categories, adjusted for year.

Statistical significance was set at 5% for a two-sided test.

Almost 95% of consultations in the most disadvantaged SEIFA category were direct billed, compared with 70%–80% in more advantaged postcode groups (Box 4).

There were a number of limitations to our data.

We were unable to report the rate of consultation types per GP across SEIFA categories, as about 40% of GPs consulted across more than one SEIFA postcode group. For privacy reasons, the data were not provided in a way that made it possible to identify individual GPs. The distribution across SEIFA categories of practices with multiple billing locations and full-time or part-time GPs might explain some of the findings presented in Box 1. However, this would need further research.

There has been recent criticism of the use of SEIFA IRSD as a measure of socioeconomic disadvantage at a population level,15 because of the loss of fine detail when examining area differences in health indicators. This would tend to mean that any differences we have identified may be less than would appear if smaller areas of disadvantage were examined.

Additionally, associations observed from aggregate data may not be true at the individual level. Further, given the large number of records analysed the statistical tests should be interpreted with care. Small differences may be found to be statistically significant, but may not be considered clinically important.

The extent to which GPs in disadvantaged areas see patients from outside those areas is unknown. The SEIFA scores we used were for GP location rather than patient residence. Patients may have come from areas that were more or less disadvantaged than the area in which the GPs' practices were located.

Finally, while they remain the only data available, the relationship between billing data and actual time spent in consultations is not known.

Are people in poorer areas seeing GPs more frequently, for shorter consultations? Our findings show that there was some trend in that direction.

Consultation length may be determined to some extent by the fee structure that GPs work within. GPs in more disadvantaged areas are more likely to bulk bill (Box 4), and it may be that those who bulk bill are best able to maximise their income through multiple shorter consultations rather than fewer longer ones. However, one report on the period 1989 to 1996 showed that longer consultations were twice as common when the consultation was bulk billed.16 Further analysis of the proportions of old and new medical problems managed within each location would help clarify this issue.

It may be that GPs in poorer areas are more overwhelmed with unmet need and are only able to meet patient demand through more frequent, shorter consultations.

It is possible to manage some aspects of complex chronic problems through more frequent, shorter consultations. However, this ignores the findings that many markers of quality care, including satisfaction, patient enablement, preventive care, fewer prescriptions, appropriate referral and investigation, recognition and management of psychosocial problems, are all more likely within longer consultations. These are important and meaningful outcomes in terms of the burden of chronic disease.

Patient factors, including their expectations of GPs, their ability to articulate needs, their readiness for preventive action and their cultural difference from the GP, may also play a part in determining the time spent in the consultation.

Further research into the relationship between consultation length and quality of care and health outcomes is needed.17

Implications of our findings

Patients visiting GPs in disadvantaged areas may not be receiving the same high quality care as patients in more advantaged locations.

This may represent an example of the inverse care law,18 where medical care is least likely to reach those most in need. With the current emphasis on the importance of coordinating care, integrating care and promoting self-management, people in disadvantaged areas are missing out on the feature of care most likely to enhance these within a consultation — namely, time. Patients and GPs in these areas may not be well placed to benefit from these new initiatives. It will be important to examine data on the uptake of the new Enhanced Primary Care items (which support care planning for aged patients and people with chronic diseases requiring multidisciplinary care) to see if they follow a similar inverse relationship to need.

Inequity in access to high quality care requires systematic monitoring and action within health policy, and programs at both a federal and State level.

Whatever the underlying reason, it seems that people from disadvantaged areas are less likely to have longer consultations with GPs in their area. This is despite the fact that, as a group, they have significantly higher need for care. This indicates that this aspect of high quality general practitioner care is inequitably distributed in our community. Further exploration of how other aspects of care, such as prescribing, referral and investigation rates, are used according to need will help explain how poorer access to longer consultations is influencing other aspects of care.

3: Rate ratio for the rate of long plus prolonged consultations per person for the Socio-Economic Indexes for Areas (SEIFA) categories, adjusted for year 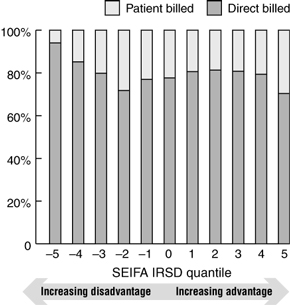