Water and the environment: a natural resource or a limited luxury?

Many Australians take for granted access to as much high-quality drinking water as desired. In developed countries, water treatment technologies have eliminated most waterborne infections. However, new health threats, limited water resources and environmental changes, such as increasing salinity and global warming, along with more sensitive methods for measuring contaminants, are bringing the safety of our water supplies back into question.

These organisms may be transmitted by other routes, including food and person-to-person spread, and drinking water is thought to be a minor contributor to disease in most Australian communities. For example, a recent randomised controlled trial in Melbourne found no difference in gastroenteritis rates between people who drank regular tap water and those who drank filtered, ultraviolet-treated water, suggesting that drinking water does not contribute significantly to background rates of gastroenteritis in that city.1

However, the potential for large populations to be exposed to pathogens via the water supply mandates vigilance against contamination of source water and failure of water treatment procedures. In addition, for many smaller and remote communities, limited resources mean that reliable provision of microbiologically safe water remains a challenge.

Microbial contaminants in Australia's drinking water supplies are reduced or eliminated through protection of water catchment, disinfection, water treatment and filtration. Treated water is then monitored for bacterial indicator organisms to satisfy guidelines for use as drinking water. However, this type of monitoring inevitably involves a timelag between sampling and availability of test results, and water contamination will seldom be detected until after consumption. Moreover, while current indicator organisms (Escherichia coli or faecal coliforms) are good indicators of risks from bacterial pathogens, they correlate poorly with viral and protozoal pathogens.

Monitoring for viral or protozoal pathogens has been suggested to improve the microbial safety of water supplies, but is technically difficult and expensive, and results are hard to interpret. For example, in Sydney in 1998, high concentrations of Cryptosporidium oocysts and Giardia cysts were reported in treated drinking water, but subsequent investigations revealed no evidence of increased disease,2 and questions were raised about the validity of the test results.3

Cryptosporidium spp. and Bacillus anthracis are candidates for bioterrorist contamination of water supplies,4 because of their low infectious dose. Although the high level of dilution reduces the risk of health effects, the threat cannot be dismissed. Protecting the security of water supplies is now a major focus of the Australian and international water industry.

Use of alternative water sources, such as water reuse schemes and rainwater collection, may increase the risk of infection. New risk-management approaches or water treatment methods may be needed to protect public health. For example, increasing use of rainwater or "grey" water (laundry and shower waste) in urban areas raises the possibility of cross-connection with the tap water supply, and may require more stringent plumbing regulations.

Chemicals may enter drinking water through leaching from the environment, chemical spills and deliberate additions (eg, disinfectants), and contact with piping and plumbing materials. In addition, toxins produced by cyanobacteria (blue-green algae; Box 1) may be considered as chemical contaminants, as their health effects are mediated via intoxication rather than infection. Cyanobacterial blooms occur in warm, slow-moving rivers and lakes, and are promoted by nutrient runoff from the surrounding catchment.

Some chemicals relevant to drinking water quality and their potential health effects are summarised in Box 2. For many, there is clear evidence of adverse effects at high exposure levels, but the degree of risk at the lower levels found in drinking water is not well defined. Drinking water guideline levels for chemical contaminants incorporate safety factors, so that daily exposure at the guideline level over a lifetime poses no significant risk.

Debate continues about the health effects of exposure to disinfection byproducts, while more recent concerns include endocrine disrupters (chemicals which mimic or interfere with the actions of endocrine hormones) and pharmaceuticals.

Disinfectants such as chlorine and chloramines react with suspended organic material to produce a large range of byproducts. Some epidemiological studies have indicated a possible association between exposure to disinfection byproducts and adverse health effects (Box 2), although evidence in this area is conflicting and inconclusive.5 Attention has focused on chlorine-based disinfectants, with the byproducts of other chemical disinfectants less well studied. Overall, the immediate benefits of chlorination in terms of protection from microbial pathogens far outweigh theoretical long-term risks of disinfection byproducts. This was well illustrated in Peru, where inadequate or absent disinfection was a contributing factor in a major cholera outbreak.6

Manufactured chemicals, such as pesticides, insecticides, industrial waste products and pharmaceuticals (including antibiotics, steroids and reproductive hormones), may contaminate our water supplies. Use of recycled wastewater and biosolids from sewage increases the potential for exposure. Concern has arisen about the potential adverse effects of low-level exposures to these substances, particularly those with endocrine-disrupting activity. No impact on human health has been convincingly demonstrated so far, but research on this topic is a high priority.7

Many chemicals and toxins are odourless, colourless, tasteless and biologically active in microgram amounts and, as such, could serve as potential tools for bioterrorism. Possible candidates include botulinum toxin A, tetrodotoxin, ciguatoxins, arsenic, lead, mercury, pesticides and radionuclides.4

Potential health risks associated with exposure to swimming pools, spas, rivers, reservoirs or marine waters include gastrointestinal, skin and respiratory infections. Gastrointestinal infections transmitted by the faecal–oral route are most common. Public swimming pools have been linked with outbreaks of disease caused by E. coli, Shigella, Cryptosporidium and Giardia spp. Other illnesses related to recreational water exposure are shown in Box 3. In addition, cyanobacteria may cause contact dermatitis, gastroenteritis and allergic symptoms, possibly through endotoxins (Box 1).

Provision of safe and adequate water supplies is a major challenge in small communities in remote parts of Australia, especially Aboriginal and Torres Strait Islander communities. Insufficient water for cooking, domestic use and personal hygiene increases the risk of infections transmitted by the faecal–oral route, and skin and eye infections, including trachoma. Low water intake may also contribute to renal disease. With increasing depletion of water resources caused by increasing demand and changing rainfall patterns, limited water supply may become a more widespread problem.

The quality and quantity of water sources are at risk from activities such as logging, farming, mining, residential and industrial development, recreation and tourism. Sewage and wastewater runoff also contribute to source water contamination.

Australia's water use has increased 65% since the early 1980s. Many rivers, wetlands and bays are already degraded because of the high levels of water extracted and runoff of polluted surface water and stormwater. As few sources of surface and groundwater remain unexploited, new strategies to match supply and demand are needed.

Although drinking and recreational water supplies are unlikely to be major sources of illness in Australian communities, they pose a potential risk. Clinicians have a role in diagnosis of waterborne disease and prevention:

Water restrictions, increasing use of alternative water sources and more water-efficient appliances will be important elements in reducing our demand for drinking water, but may also present potential health risks. Solutions will include:

The Australian Drinking Water Guidelines are currently being revised to incorporate a preventive risk management approach.11 This emphasises the need for multiple barriers to microbial and chemical contamination throughout water supply systems and for real-time monitoring to detect and rectify problems before they affect water quality.

These have a long history of use for domestic drinking water in rural and remote areas of Australia and are being increasingly used in urban areas to conserve tap water supplies. While drinking water from these tanks is not believed to pose a major risk if systems are well designed and maintained,12 health authorities are generally not prepared to endorse the use of untreated rainwater for public consumption because of potential contamination and a lack of health outcome data.

Water is already recycled in agriculture and industry, which use most of our water supplies. Guidelines exist to control potential health risks from microbial and chemical contamination for different applications.13 It is technically feasible to raise the quality of recycled water to drinking water standard, but cost and public perception are obstacles.

To reduce the demand for high-quality water, it is possible that communities will be supplied with water of two qualities — drinking water and water for outdoor use and purposes such as toilet flushing. Such dual systems are used overseas and have recently undergone trials in housing developments in Australia (eg, Rouse Hill in Sydney). Adequate safeguards are required to address the threat of cross-connection and supply of substandard water from taps.

Agriculture, industry and urban populations will continue to compete for land and water. Disease outbreaks and contamination events have often provided the impetus for upgrading drinking water technology, protecting watersheds, improving distribution and regulatory systems overseas,14 but water quality has not been seen as a major public health issue in Australia to date. We need new technologies and responses to ensure sustainability of our water supply, but new public health questions will undoubtedly arise. We should not expect limitless water supplies and should not take safe and clean water for granted (Box 6).

1: Recreational waterway closed because of a cyanobacterial bloom 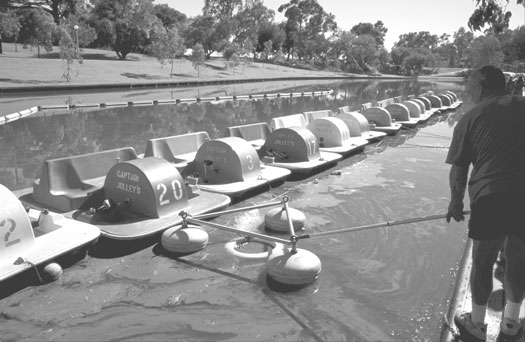 Although cyanobacteria do not infect humans or animals, they may cause contact dermatitis, gastroenteritis and allergic symptoms (eg, rhinitis, conjunctivitis and asthma), probably through cellular endotoxins. Some blooms also produce hepatotoxins or neurotoxins.

3: Non-gastrointestinal illnesses associated with recreational water exposure, and their causes

Liver or renal disease
Leptospira spp. (via skin contact with water contaminated with animal or rodent urine, often in association with water sports and adventure travel;23 a recent large outbreak occurred among participants in a Malaysian triathlon24). 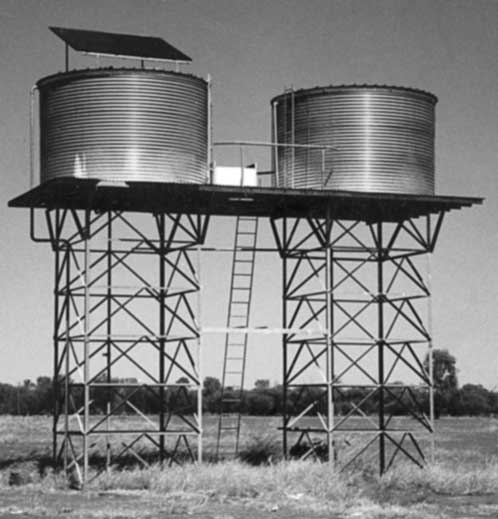 These tanks are fitted with solar-powered reverse-osmosis filter systems to reduce levels of dissolved solids and render the water palatable.