The recent pioneering Public Report Card 2002 — Aboriginal and Torres Strait Islander health, entitled No more excuses,1 outlines where we are today and how the health of our Indigenous population compares with that of other similar countries — New Zealand, Canada and the United States. Produced by the Australian Medical Association, it is a "warts-and-all" assessment which is designed to show what is working and where we need to do better.

Where do we stand on health?

There have certainly been some gains. The health of Indigenous infants has improved dramatically, although from a low baseline, and most of the gains occurred 20–30 years ago.2 The current infant mortality rate for the Aboriginal and Torres Strait Islander population is almost three times that of the general Australian population, twice that of the Maori, and 50% higher than the mortality rate of US Indigenous infants.3 This is some improvement on previous rates, but we can and should do better.

On the other hand, there are number of recent good news stories. Programs in the Northern Territory and elsewhere have shown that birthweight, the critical factor in the survival of newborn infants, can be improved.5,6 More dramatically, death rates from pneumonia have dropped by around 40% since 1996 (derived from Australian Bureau of Statistics data). This is important, because this reduction is likely to be due, in part, to recent government initiatives for promoting pneumococcal vaccination. This is a real indication of the kind of rapid and substantial gains that can be achieved through application of knowledge we already have. (Well done, even if long overdue.)

Progress in providing access to health services for Aboriginal and Torres Strait Islander communities is much too slow. There is a gross shortage of doctors working in Indigenous health, with an estimated 60% increase required (ie, at least 500 doctors). The number of nurses also needs to increase by 25%, and there are sizeable deficits in all the other health professions.7

There has been some improvement in basic services and facilities to some areas, but too many Aboriginal and Torres Strait Islander communities still lack adequate water, electricity and sewerage services.8,9 In other fields influencing health, there has been some modest improvement in educational benchmarks, but still only a third of Aboriginal and Torres Strait Islander children reach Year 12 at school.10

Most tellingly, however, are the data for the most reliable overall measure of health — median age at death, currently 51 years for the Aboriginal and Torres Strait Islander population. There has been no improvement at all in this measure in the last 10 years.3 In this same period, the median age at death for the total Australian population increased by three years, so that the gap in median age between Indigenous people and the rest of the population has now increased to a staggering 26 years. Median age at death is much higher for the Indigenous populations of New Zealand (59 years), Canada (65 years) and the United States (63 years) and, in contrast to the situation in Australia, has been progressively increasing for the last 25 years,11 and probably for much longer.

What about health spending?

Spending on Aboriginal and Torres Strait Islander health is increasing, but, incredibly, the Commonwealth Government, through programs under its direct control, still spends less per capita on Indigenous people than it does on the rest of the Australian population — 74c on Indigenous Australians for every $1 spent on the rest of the population! The real increase in spending on Indigenous health between 1995–96 and 1998–99 was 15%.12 This is worthwhile, but nowhere near enough to cater for the higher levels of illness among Indigenous people. There has been a major new initiative, the Primary Health Care Access Program, with three key features: needs-based funding, funds pooling and community control. However, the funding for the program is totally inadequate, and at this stage only selected communities can participate in a program which is needed for Indigenous people throughout Australia.13 The consequences of the funding shortfall are major deficiencies in the crucial prevention and early treatment services required to break the cycle of ill-health.

Why do we do so much worse than other countries?

What is it about Australia that stops us from achieving the gains seen in the health of the Indigenous populations in other Western democracies, or, for that matter, in developing countries around the world? There is, after all, nothing absolutely unique either about the disease pattern or the history and circumstances of the Australian Indigenous population. Heart disease, respiratory conditions, injuries and diabetes are also the major conditions for the Indigenous populations of other countries. Dispossession, forcible relocation, removing children from their families, and heavy-handed paternalism are certainly not unique to Australia.

Nor is Australia incapable of doing well with health and health services. Depending on which measurement you take, Australia is arguably the second- or third-healthiest country in the world, with a proud record in confronting difficult and complex issues such as AIDS and cancers in women.14

Why is the government not doing more?

It is symptomatic of our lack of progress that this report card, and its call for action, comes not from the government, but from health professionals. Surely one would hope that some response, some soul searching, some rethinking would be evoked by the fact that over the last 10 years, despite some good news, the overall mortality of the Australian Indigenous population, alone among Western nations, has not improved, is much worse than for the Indigenous populations of New Zealand and North America, and that the gap between the mortality rate of the Indigenous population and that of the rest of the Australian population is becoming wider. But no, there is simply a deafening silence; a case of industrial deafness.

Shortfalls in medical services for rural areas have produced major government programs and initiatives, and a massive injection of funds. Where is the response to the huge shortage of doctors and nurses to work in Indigenous health, and the major gaps in the workforce of all the other health professions? For any other section of the population there would be a massive outcry and appropriate remedial action.

In fact, for Aboriginal and Torres Strait Islander health, the Commonwealth Government seems to be tied up with a curious logic that requires "good news" from spending less on people with worse health before it will fully rectify the health service deficiencies needed to address the worse health!

Australia is locked into a cycle of endless consultation, policy and strategy formulation and measurement. Report after report is produced showing that Indigenous health is poor, improvement patchy at best, and that, overall, the gap between Indigenous and non-Indigenous health is widening. These reports reach the highest levels of Australian public and political life and are simply noted, or evoke defensive bureaucratic responses. We must act on the reports, not just note them. Flat-lining for 10 years is not good enough!

Many worthwhile activities are under way, but would any informed observer really claim that current or planned prevention and treatment services, staff provision and training plans, and environmental improvements, will do the job, or are anywhere near sufficient to bring about the Indigenous health gains seen in other countries most like Australia?

What do we need to do?

We don't need new solutions, new strategies, some magic bullet. We need to implement strategies, like the National Aboriginal Health Strategy,15 that have been around for more than a decade. The Report Card reinforces previous calls for a national program to build up the necessary community-controlled health services for prevention and treatment; for the Primary Health Care Access Program to be given the funds required to provide those services; for a National Training Plan to train the staff, particularly Indigenous staff, required to deliver those services; and for a National Infrastructure Plan to rectify the continuing deficiencies in water supply, sanitation, education and other basic services.

Australia spends over $50 billion per annum on health for its total population.16 It isn't that the modest funds required for adequate health services for Aboriginal and Torres Strait Islander people are out of reach, or that the services required are beyond our technical capacity. It is ultimately a commitment to implement the recommendations of the endless reports, and this is what the AMA, in support of Aboriginal and Torres Strait Islander organisations, is urging on the nation.

Straws in the wind? 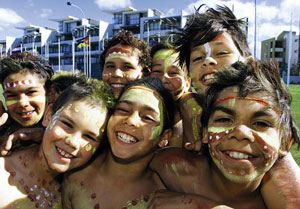 Despite the general lack of progress, there are straws in the wind. The appointment of a new Health Minister and a new head of the Commonwealth Department of Health provides a fresh opportunity for dealing with the issues highlighted in the Report Card. Death rates of the NZ Maori and the Indigenous peoples of Canada dropped by 30% in the 1970s.17 Over a 40-year period, the health of the Indigenous populations of the United States improved twice as rapidly as that of the non-Indigenous population.14 Australia can do the same, and that should be our aim.