Background: In 1941, a Sydney ophthalmologist, Norman McAlister Gregg, correctly identified the link between congenital cataracts in infants and maternal rubella early in pregnancy. Fifty of Gregg's subjects with congenital rubella, born in 1939–1944, were reviewed in 1967 and again in 1991. We reviewed this cohort in 2000–2001, 60 years after their intrauterine infection.

Methods: The subjects underwent full clinical assessment, plus pathology tests, an ophthalmological and cardiological review (including electrocardiography and echocardiography) and HLA histocompatibility testing.

Results: Since they were first seen in 1967, 10 have died (cardiovascular causes [4], malignant disease [4], AIDS [1], and hepatitis C-related cirrhosis [1]). All surviving men came for review (19) and 13 women (eight women declined). Echocardiography showed mild aortic valve sclerosis in 68%. The prevalence of diabetes (22%), thyroid disorders (19%), early menopause (73%) and osteoporosis (12.5%) was increased compared with the Australian population; 41% had undetectable levels of rubella antibodies. The frequency of HLA-A1 (44%) and HLA-B8 (34%) antigens was increased, and the haplotype HLA-A1, B8, DR3, said to be highly associated with many autoimmune conditions, was present in 25%.

Conclusions: This cohort of people with congenital rubella has illuminated our understanding of viral teratogenesis.

At the University of Sydney medical students attend lectures in the Norman Gregg Theatre, but few know it was Gregg who identified the causal relationship between rubella in women during pregnancy and congenital defects in their offspring. (see Box 1).

To evaluate the natural history of congenital rubella, 50 of the original cohort of patients reported by Gregg were reviewed, 25 years later, at the Children's Medical Research Foundation, Royal Alexandra Hospital for Children.11 These subjects had been born in Australia between 1939 and 1944: 48 were deaf, 26 had cataracts or retinopathy, 14 had cardiac defects, five were mentally handicapped, and one had diabetes mellitus type 2.12 This cohort of patients was followed up again in 1991, when most were 50 years old (seven had died). Forty had a full clinical assessment; five had clinical diabetes mellitus type 2.13

All surviving men came for review, but eight of the women declined. Thirty-two subjects (19 men) had a full clinical assessment, plus pathology tests, ophthalmological and cardiological review (including electrocardiography and echocardiography) and HLA histocompatibility testing.

Of the 32 subjects, 31 were deaf, but their general health was comparable with that of others of their age.

Twelve subjects had rubella retinopathy, eight had glaucoma, and three had developed cataracts over the last 10 years. One subject was blind and other ocular conditions were present in eight subjects.

Twelve subjects (37%) were being treated for hypertension, and 16 had, or were being treated for, high cholesterol levels. One woman was paralysed after a stroke, another had had a recent subarachnoid haemorrhage. Three men had significant ischaemic heart disease (two with prosthetic aortic valves replacing congenitally damaged ones; one also had an abdominal aortic aneurysm). Another man with a repaired patent ductus arteriosus had a calcified dysplastic aortic valve. Echocardiograms in 31 subjects (not performed in previous reviews) showed that 8/31 (26%) had normal aortic valves. Mild asymptomatic aortic valve sclerosis was noted in 21/31 (68%) (29% expected in a population of this age),14 and mild asymptomatic aortic regurgitation in 13/31 (42%). Thirty-nine per cent had normal mitral valves; mild asymptomatic mitral valve sclerosis was noted in one subject, prolapse in two, and regurgitation in 19 (61%).15

Diabetes mellitus type 2 was present in seven subjects (22%); the expected prevalence in Australia is 13.1%: 16 two of the three requiring insulin therapy had diabetic retinopathy and elevated levels of glutamic acid decarboxylase (GAD) antibodies and insulin autoantibodies (IAAs), one required oral medication, and in three their condition was controlled by diet. Another woman had very high levels of both GAD antibodies and IAAs. Two subjects had hypothyroidism, four had abnormal thyroid function tests, and one had had thyroid and parathyroid adenomas. Early menopause (before 50 years) was reported by 8 of 11 women: in three this occurred before 38 years. Four women (two with early menopause) were receiving treatment for osteoporosis.

Thirteen of the 32 subjects (41%) were rubella antibody (ELISA) negative (< 5 IU/mL). Overall, there were no significant changes in rubella antibody levels in these 32 subjects between 25 and 50 years of age, but by the sixth decade the proportion with negative levels had risen from 25% to 41%. (Direct comparability of serological tests over 35 years was not possible.) One subject had had absent levels of immunoglobulin A for 35 years. Despite other minor non-significant variations in immunoglobulin levels at this review, no subject had clinical problems related to this.13,17

HLA testing showed increased frequencies of HLA-A1 (44% v 35%) and HLA-B8 (34% v 27%) antigens,18 and of the haplotype HLA-A1, B8, DR3 (25% v 4%–6%), compared with the general population. This haplotype, said to be highly associated with many autoimmune conditions, was present in one subject with hypothyroidism and two subjects with diabetes, and in the patient with elevated GAD and IAA.19 These HLA prevalences were noted in earlier reviews18 — their association with an increased susceptibility to congenital rubella could only be proven by study of newborns with congenital rubella.

By their 60-year visit, only eight subjects (including the one blind woman) were still working. Many had retired early, or were on pensions; nine had never married. Many knew one another from their years in deaf schools and classes (Box 3). As a group they had provided their children with better occupational/educational opportunities than they themselves had enjoyed. Although they had coped with their disabilities much better than predicted, they expressed satisfaction that rubella vaccination means that today's young Australians do not have to cope with the problems they had to overcome.

Others have followed up subjects with the congenital rubella syndrome. In 1991 Dr Louis Cooper described the 20 000 children born in the United States during the 1964–1965 epidemic.20 In their 20s, a third were leading normal lives, a third lived with their parents and had "non-competitive" jobs, and a third required institutional care for profound handicaps. Suicide and death from trauma were not uncommon. Some had progressive disease, such as glaucoma (without cataracts), or late development of deafness. Cooper suggested that "autoimmune processes may play a part in these progressive conditions". About 15% of patients with congenital rubella syndrome in the United States have insulin-dependent diabetes mellitus, associated with HLA antigens DR3 and DR4.

The study of deaf-blind congenital rubella subjects by the US Helen Keller Center (most subjects were aged between 16 and 36 years) described higher than expected rates of glaucoma and diabetes, hypo- and hyperthyroidism, hormone imbalances, premature ageing, and oesophageal and gastrointestinal problems.21 A Canadian study of similar subjects aged 5–62 years showed comparable findings, including diabetes (12%), clinical thyroid dysfunction (10%) and osteoporosis (7%).22 In the UK National Congenital Rubella Surveillance Programme about 10% of affected subjects born since 1965 had died, most as infants with heart defects;23 diabetes mellitus and thyroid disorders were also noted in UK subjects (Dr P Tookey, Institute of Child Health, London, personal communication, 2002).

In 1941, when cardiac correction of major congenital heart defects was unavailable, many severely affected infants did not survive. Those who did were probably less severely affected than survivors of rubella epidemics in the 1960s and 1970s, and in our subjects progressive rubella panencephalitis was not seen.24,25

Our subjects represent the longest period of follow-up, being part of the group which prompted Gregg's original description of viral teratogenesis. Congenital rubella is now rare in Australia,26 except in occasional children whose mothers come from countries without rubella vaccination programs, where disability from congenital rubella is common.27 The 1998 Australian Measles Control Campaign (in which measles–mumps–rubella vaccine was used) raised the proportion of schoolchildren immune to rubella to over 95%, but "15–20% of young men remain susceptible and a potential source of infection for pregnant women with inadequate immunity".28

This cohort of people with congenital rubella syndrome has illuminated our understanding of viral teratogenesis.29 We are grateful to all of them, who have so cheerfully and willingly taught and inspired us over the past 35 years. The complete clinical findings in the 32 subjects, including HLA antigen status, are available from the authors. 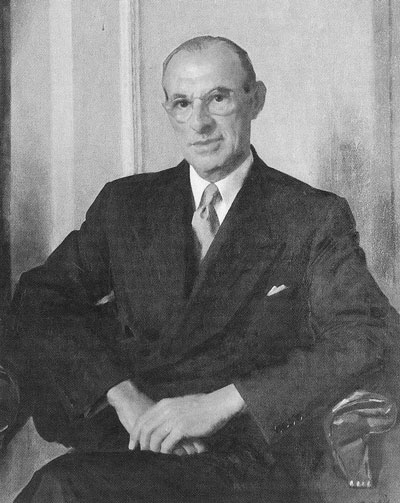 In 1940–1941, an epidemic of German measles swept through army training camps in Australia, and many young men carried the infection home on leave. In early 1941, a 50-year-old Sydney ophthalmologist, Norman McAlister Gregg, wondered why he was seeing more infants than usual with congenital cataracts. Listening to the young mothers, and consulting with colleagues in New South Wales and Victoria, Gregg identified 78 infants with congenital cataracts, 68 of whose mothers reported having rubella (German measles) early in pregnancy or just before they knew they were pregnant. Many infants also had congenital heart conditions; in fact, by the time Gregg reported his findings in October 1941, 15 had died.1 Gregg's suggestion that rubella played a causal role — 20 years before the rubella virus was identified — was revolutionary2,3 at a time when the placenta was considered an absolute barrier to infectious agents. But others, particularly Charles Swan and his colleagues in Adelaide,4 described additional defects such as deafness in these children; Aileen Mitchell described an unusual pigmentary retinopathy;1 and pathologist Douglas Reye found characteristic intimal proliferation in arterial lesions at autopsy.1,5,6

The NSW Director-General of Public Health set up a committee, chaired by Gregg, which subsequently identified a large cohort of Australian children with congenital rubella.7 Then, in 1951, Oliver Lancaster's elegant description of epidemics of deafness (back to 1879), nine months after outbreaks of rubella infection in Australia, demonstrated that congenital rubella had occurred, but had been unrecognised in the years before 1941.8

Once the virus was identified in 1962, and serological tests were developed, it was realised that the prenatally acquired rubella virus was not only teratogenic, but also caused chronic fetal infection, often persisting after birth and able to be transmitted from infants to their carers. It was already known that multiple defects followed first-trimester or preconceptual infection, while early second-trimester infection tended to cause only deafness. The postnatal development of cataracts, pulmonary artery stenosis, retinopathy and deafness indicated that the continuing presence of the virus could cause further damage.

The worldwide 1964 rubella pandemic highlighted additional features: low birthweight, neonatal thrombocytopenia, hepatosplenomegaly, myocarditis, osteitis, hypospadias, interstitial pneumonitis, meningoencephalitis, cerebral calcification, dental defects, and widespread obstructive arterial lesions. Failure to thrive during the first year of life often resolved as children ceased to shed virus in urine and nasal secretions, usually by 12 months of age, although some remained actively infected for up to 3 years, and rubella virus was isolated from the urine of a 29-year-old woman with congenital rubella during an intercurrent infection.9

Immunological hints were tantalising: actively infected children shed virus despite high circulating antibody levels; diminished responses to immunisation with diphtheria and tetanus toxoids and polio vaccine suggested some degree of B and T cell tolerance;10 and late-onset (3–12 months) rash and pneumonitis were described. In children whose rubella antibody levels had declined or disappeared after 2 years of age, failure to respond serologically to rubella vaccine was considered a useful diagnostic aid for congenital rubella. 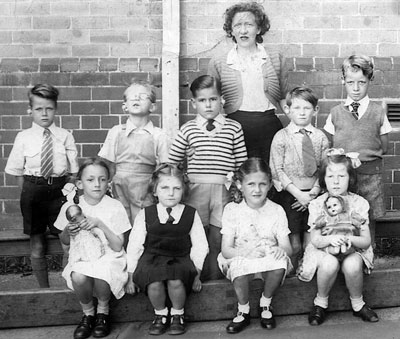 School class of deaf children and their teacher in 1948, with four of the subjects described in this review (used with the kind permission of the owners of the photograph).

We thank the 50 subjects, their families and their doctors, and all the staff and departments at the Royal Alexandra Hospital for Children (trading as The Children's Hospital at Westmead) who cooperated in the study, particularly Dr Christopher Cooper, Dr Rohit Manokumar and Dr Adam Steinberg.

The complete clinical findings in the 32 subjects, including HLA antigen status, are available from the authors.