Foodborne disease in the new millennium: out of the frying pan and into the fire?

Climate change, combined with the way we produce, distribute and consume food, has the potential to affect foodborne disease in the coming century. It is predicted that global warming, with its effect on temperature and rainfall (more storms in some areas and drought in others), will adversely affect food and water supplies, and that by 2100 an extra 80 to 90 million people will be hungry or malnourished.1 Climate change has the potential not only to decrease food supplies, but also to increase microbial and toxic contamination of foods.2

In addition, changing technology is creating new concerns about food safety. Medical practitioners may be consulted about the safety of take-away and pre-packaged foods, genetically modified foods, and toxins and allergens in food, as well as the risk of bovine spongiform encephalopathy.

We will discuss recent changes to the patterns of foodborne disease and the evidence that climate change may increase microbial and toxic contamination of food.

About four million cases of foodborne infectious disease are estimated to occur annually in Australia.3 The pattern of enteric diseases has changed considerably since the 19th century, with improved sanitation and water supplies. Nowadays, commonly reported pathogens include Salmonella spp. (causing 1%–2% of cases of community gastroenteritis), Campylobacter spp. (3%) and caliciviruses (10%).4

In Australia, as in many other developed countries, notification rates for potentially foodborne infections have increased over recent decades. While this is probably partly because of improved laboratory techniques for identifying pathogens and better reporting to surveillance systems, another possible reason is changing consumer behaviour — people are less likely to eat food cooked at home, favouring more takeaway and pre-packaged meals, which may carry higher risks if poorly prepared. More complex and globalised patterns of food production and distribution have resulted in outbreaks that are sometimes global in scale, such as the 2001 outbreak of Salmonella infection caused by peanuts imported into Australia and several other countries.5 On the other hand, large-scale commercial food processing may also decrease food contamination, as safety procedures are often stricter.

Outbreaks of infection are increasingly caused by novel foodborne organisms, such as Escherichia coli O111 and O157 (often caused by eating rare beef), Listeria spp. (generally a problem in immunocompromised people and pregnant women) and Cryptosporidium spp. (transmissible by food as well as water). Of concern is the development of antibiotic resistance among some pathogens, possibly because of antibiotic use in animal feeds,6 as well as overprescribing.

Link between climate and foodborne disease

A link between climate and microbial foodborne disease remains speculative. Evidence for this link comes from the observed seasonality and latitudinal gradients in the amount of foodborne and diarrhoeal illnesses, changing disease patterns during El Niño warmings, and links between waterborne7 and foodborne8 illnesses and weather disturbances (Box 1). Some weather events affect water quality, which may lead to subsequent food contamination. A statistical association between disease and short-term temperature changes also suggests that foodborne disease will be affected by long-term climate changes.14,16

Seasonality of diarrhoea and foodborne disease

In developing countries, poor hygiene and sewage disposal, inadequate facilities for food preparation and storage and lack of potable water contribute to a high incidence of diarrhoea.18 The incidence generally rises in summer, but the reasons for this may vary in different environments. For example, seasonal lack of food may lead to seasonal malnutrition and hence susceptibility to infectious foodborne disease in some areas,19 while temperature and rainfall may have direct effects on growth and dissemination of pathogens in others.

In Australia, the most reliable data on foodborne disease are probably for Salmonella infections, although probably as few as 5%–10% of people with such infections in the community visit their doctor, and have a positive stool sample reported to surveillance (unpublished data, OzFoodNet, 2002). Australian surveillance data show that Salmonella infections increase in summer, while Campylobacter infections increase in spring20 (Box 2), similar to patterns seen overseas. The different timing of the peaks in Salmonella and Campylobacter notifications suggest that different mechanisms are responsible for their seasonality.

In eastern Australia, rates of Salmonella notifications increase with decreasing latitude and consequently with increasing average yearly temperature (Box 3). Even allowing for confounding factors, such as regional variation in environmental conditions, populations, serovars and routes of transmission, the pattern suggests that climate is a possible influence on the level of salmonellosis in eastern Australia. The higher rates in Tasmania could be due to Salmonella Mississippi, an endemic serogroup found predominantly in that State. This serovar may have a higher transmission rate directly from the environment than from food.

Some health effects related to El Niño are shown in Box 1. Notable effects include epidemics of cholera in Peru12 and Bangladesh,15 increased diarrhoeal illness in Peru13 and widespread faecal contamination of seafoods in Florida.8

Caution is required before inferring that climatic temperature is a direct cause of foodborne disease. Temperature may be a marker for other factors that change seasonally or with locality (eg, animal reproductive cycles), or seasonal variation in farming practices (eg, fertiliser application). There may also be confounding or biases in data collection methods. Nevertheless, the evidence suggests that a causal relationship between temperature variation and salmonellosis and some other foodborne illnesses is possible.

Poor hygiene and temperature control during food production, processing, transport, preparation or storage may interact with climate change, allowing pathogens to multiply (Box 4). The most commonly identified or suspected food vehicles reported in food-related outbreaks in Australia are poultry, red meat, fish, shellfish and salad.5 Some new pathogens have emerged due to changed food production conditions which favour proliferation of some pathogens rather than others (eg, Salmonella spp.), while others have become recognised with new identification techniques (eg, toxigenic E. coli).

Changing climate may also influence human exposure to natural and man-made toxins. For example, higher ocean temperatures may increase the incidence of ciguatera poisoning.26 This serious illness is associated with eating large fish that have accumulated toxins produced by dinoflagellates growing on bleached coral reefs.27 The illness is characterised by diarrhoea, vomiting and abdominal pain, then paraesthesiae and other neurological effects which may persist for weeks. In Australia, in 2001, five out of six reported outbreaks of ciguatera occurred in Queensland through amateur fishermen catching and eating contaminated fish.5 With higher surface ocean temperatures, the distribution of affected reefs may expand.

Higher global temperatures could increase human exposure to toxins produced by cyanobacteria (blue-green algae) in water supplies and recreational water bodies, which can cause gastrointestinal and dermatological symptoms.28 Similarly, production of mycotoxins in agricultural produce could increase. These include aflatoxins, which are produced by fungi growing in stored grains and nuts in hot, humid conditions and which are hepatotoxic and carcinogenic.29

Changing weather patterns may increase pests in crops and consequent use of agrochemicals, potentially exposing humans to greater concentrations of man-made chemicals. Genetically modified foods may become more common as the world attempts to feed a larger population and to control pests by developing strains resistant to infestation. The possible health effects of these foods are as yet unknown.30

In Australia, it is estimated that global warming will cause temperatures to rise 0.4o–2oC by 2030, and 1o–6oC by 2070.31 Assuming that a sustained temperature rise has a similar effect to monthly temperature variations, then the incidence of salmonellosis may rise, and, by extrapolation, the incidence of diseases caused by other foodborne pathogens and toxins could also rise (Box 5). Some communities might be more vulnerable to these effects than others, depending on the technology available to control food production and transport to provide "buffering" against the environmental change.

Regulatory authorities are currently attempting to implement food safety systems based on the international standard procedure HACCP (Hazard Analysis and Critical Control Point; Box 6). With modern complex processing and widespread distribution of foods, and the potential effects of climate change, HACCP will need to be applied even more stringently.

Needless to say, if it becomes clear in future that foodborne diseases are increasing in response to climate changes, then the primary preventive measure is to limit human-induced greenhouse gas emissions.

1: Some episodes of food and waterborne infection related to climate and weather

Peru (1997–1998): Increase in hospital admissions for diarrhoea in Lima associated with El Niño13

Fiji (1978–1998): Incidence of diarrhoea increased with temperature and extreme rainfall16

2: Total monthly notifications of Salmonella and Campylobacter infections in Australia, 1991–200020

In contrast, as Campylobacter spp. require specific conditions to replicate (including a temperature of 30°C), they are most unlikely to do so outside an animal or human host.21 The Campylobacter peak in spring is therefore more likely to be related to an intermediary event triggered by temperature. As the organism is carried by birds, one hypothesis is that this event may be some aspect of bird behaviour.23 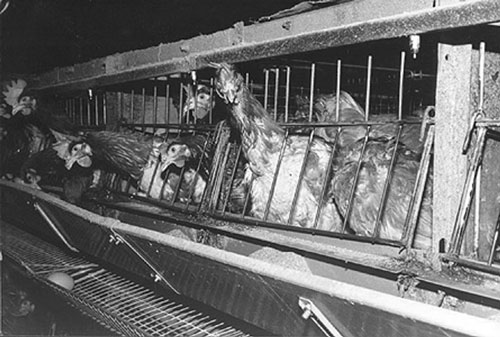 Modern farming methods raise the possibility of mass infection of foodstuffs due to crowded conditions and enhanced transmission of pathogens among stock.

4: How climate change may affect the food production chain

We acknowledge the Communicable Diseases Network Australia, National Notifiable Diseases Surveillance System, for providing data for notifications of Salmonella and Campylobacter and the Queensland Department of Natural Resources and Mines