Objective: To describe the effect of physicians' dress on patient confidence and trust.

Setting: A general medicine ward at a tertiary hospital.

Main outcome measures: Patient trust and confidence as measured by a questionnaire mailed after hospital discharge.

Results: Formal attire was correlated with higher patient confidence and trust. Nose rings were particularly deleterious to patients' reported trust and confidence. A minimum threshold of two items of formal attire (dress pants, dress shirt, tie, or white coat) were necessary to inspire a reasonable amount of confidence; this is the NND (number needed to dress).

Conclusions: We highlight the need for more research into the effects of physician dress, and coin the term "evidence-based dressing". 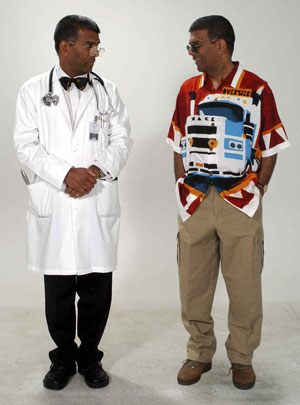 In this era of evidence-based medicine (EBM),1 it is often bemoaned that the context in which healthcare is delivered is ignored or subsumed by a focus on the intervention. This context of healthcare delivery includes the patient–doctor relationship,2 its geographical and cultural setting, and the characteristics of an individual practitioner. There is, for example, no evidence-based answer to the question, "Does a doctor's appearance constitute an important and neglected aspect of the clinical context?".

Isaacs and Fitzgerald have argued that a lack of evidence for a treatment can be overcome with an "eloquence-based medicine" — one in which impeccable, brand-name-correct dress sense takes precedence over science.3 One can argue, as they do, that a professional appearance encourages our patients to trust us and have confidence in our abilities. Indeed, a study of parents of children admitted to a paediatric ward indicated they were twice as likely to attribute competence to physicians wearing formal attire.4 This begs the question of what constitutes "formal attire" — that is, what is the uniform of evidence-based dressing (EBD)?

Traditionally, the physician's attire has included a white coat and tie,6,7 with the stethoscope used as an accessory.8 However, the evidence also suggests that these very icons that give physicians their credibility may be doing more harm than good. A white coat may prevent the tie from dangling in patients' wounds and secretions, but white coats have been shown to harbour potential contaminants.9,10 Ties themselves, dangling or not, have been shown to carry infection.11 Bow-ties have traditionally been expected to be associated with less contamination, but a multicentre randomised controlled trial showed that there was no sustained difference between necktie and bow-tie contamination rates.12

We are therefore faced with a dilemma: EBM dictates that ties are dangerous, but EBD dictates that we wear them.13 There is a marked lack of level 1 or level 2 evidence to support any clinical guidelines regarding doctors' dress. We therefore conducted a multiple crossover dressing trial, not to be confused with a cross-dressing trial, to analyse the effect of various items of clothing in inspiring patient confidence.

Twelve male general physicians at our teaching hospital were chosen to participate in our prospective, crossover trial. Over seven months, one item of clothing was removed, changed or added, at one-month intervals, in the following sequence: shedding the white coat, losing the tie, changing from dress pants to flared jeans, changing from dress shirt to Hawaiian shirt, moussing and highlighting hair, and wearing a nose ring. We describe this as the "respectable to retro" transformation, in six steps. Six physicians were randomly chosen to undergo this transformation in reverse to avoid any regression to the 1960s. Wardrobes were provided by a men's haberdashery and a charity outlet.

Endpoints measured were patients' confidence and sense of trust in their physician, as measured by an anonymous questionnaire sent to 1680 patients after their discharge. This sample size was negotiated with our friendly statistician. This averaged 20 patients per physician for each of the seven months. Questions included items such as "Would you buy a used car from this doctor?".

Each physician served as his own control, and trends (both statistical and fashion) were plotted across the six change periods. Trends were analysed by the Kolmogorov–Smirnoff test,14 in which two statisticians eyeballed the trends over a few glasses of vodka.

Not surprisingly, patient confidence was highest with the "respectable" dress protocol. Confidence levels did not deteriorate significantly with the loss of the white coat or a tie. However, the presence of a nose ring was most deleterious, with an odds ratio of "very odd" and a very wide interval of no confidence. The "retro" dress protocol was found to be an affront to sensitivities and so we were not able to calculate this parameter, although specificity was found to be high for those who grew up in the "hippie" generation. In an effort to isolate the minimum number of items that ensure a reasonable level of patient confidence, we performed subdress analysis and constructed an FOC (fashion operator characteristic) curve (Box). The point closest to the top left of the graph indicates that two items (dress pants and shirt) account for most of the patient confidence, and one item (nose ring) accounts for most of the loss of confidence.

Our results indicate strong contextual effects for the delivery of care, with physicians' dress influencing patient perceptions. Further work should define the effect of specific fashions on specific patient groups. We also believe that there is much potential in recognising fashion accessories as potential adjuvant therapies, and we advocate a new specialty called PCAM (physicians' complementary accessories medicine). By analogy to the NNT (number needed to treat), we calculate the NND (number needed to dress); this equates to any two of the four items — white coat, tie, dress pants, dress shirt — from the evidence-based wardrobe (EBW). We also take this opportunity to highlight a forthcoming joint venture between medical organisations and a department store in launching the Evidence-Based Wardrobe label. This label will have several lines, from the top-of-the-range "Level 1", for which there is the most evidence of therapeutic success, to the budget-based "Level 3". Medical organisations will also invite expressions of interest from those interested in operating EBC (Evidence-Based Cuts), a barber shop franchise to be located in teaching hospitals throughout Australia. Operators will need to adhere to strict quality-assurance guidelines, and demonstrate continuing competence through CBE (continuing barber education) to remain at the cutting edge of EBC and maintain their accreditation.

Fashion operator characteristic (FOC) curve for various items of clothing. The dip at the right-hand side of the curve indicates a loss of patient confidence with the nose ring. The zone of fashion limbo is one in which patient confidence is unstable and unpredictable.

The photograph accompanying this article was produced by Stephen McInally of Medical Communications, John Hunter Hospital.

Professor Nair is a white-coated, bow-tied, greying physician who has received complimentary neckties, boxers and socks from pharmaceutical companies. Dr Attia is a general internist who has never been accused of being fashionable. Mr Mears is an open-shirted, jeans-clad informationist. All teach EBM. Karen Hitchcock is a final-year medical student. Some of her best friends have navel rings.