Air pollution and its health impacts: the changing panorama

Air pollution is a major blot on our environmental health scorecard: in some Western countries, it is estimated that car emissions kill twice as many people as car crashes.1 In both urban Australia and New Zealand, the main sources of air pollution are motor vehicle emissions, wood smoke from home heating, and industrial pollution. Bushfires are another important source of air pollution in some parts of Australia. In New Zealand, an estimated 900 deaths per year are attributable to air pollution (2% of all deaths), of which nearly half are due to motor vehicle emissions.2 If a third of these deaths could be avoided through increased public transport use (and thus reduced car use), improved fuels and pollution-control technology for cars, the "lives saved" would be greater than deaths due to HIV/AIDS, malignant melanoma, or workplace injuries.2

The effect of air pollution on health has become a major concern in recent years. In Australia, the increasing interest in this issue has been spurred not so much by a worsening of air quality as by accumulating evidence of its effect on health and the perceived need to "do something about it". Epidemiological research into air pollution over the past 20 years has demonstrated cardiorespiratory health effects ranging from minor respiratory symptoms to increased hospital admissions and mortality.3 Toxicological and clinical studies have elucidated the mechanisms for some effects, but the association between relatively low urban air pollution levels and increased cardiorespiratory mortality has not yet been explained.

There is also increasing global awareness of the extreme levels of indoor and outdoor air pollution arising from the use of coal and biomass (eg, wood, farm waste, cowdung) for cooking and heating in developing countries.4 Coal-burning to fuel industry and produce electricity is another major source of air pollution in some countries — for example, India and China, where cheap coal is an important factor in industrialisation. On top of this, most developing countries have a rapidly worsening problem of motor vehicle traffic congestion and associated air pollution (Box 1). The combination of these factors means that in most large urban areas exposure to air pollution is severe.4

The sources, health effects and vulnerable groups for major air pollutants are summarised in Box 2. In typical urban air pollution situations, particulate matter (PM) and gaseous pollutants (oxides of nitrogen [NOx], ozone, carbon monoxide [CO] and "air toxics" [eg, hydrocarbons, aldehydes]) occur together, as the sources are the same. Furthermore, levels of pollutants vary dramatically by location and over time, depending on changing meteorological factors such as wind speed and wind direction. This makes it very difficult to isolate the health effects of individual pollutants. It is more useful to consider each of the major pollutants as "indicators" of the mixture of air pollution created by motor vehicles, home heating and industry. Continuous monitoring of PM, NOx, ozone and CO has been established in recent years in the major Australian cities,6 but these data provide only general estimates of actual exposures in individuals. CO is the only major air pollutant for which a biomarker of exposure (carboxyhaemoglobin in erythrocytes) is currently available.

Researchers are currently investigating the importance of the size and chemical composition of particles as a causal factor for cardiorespiratory effects.3 Focus has now shifted to the very small particles, PM2.5 and PM1 (ie, particles smaller than 2.5 μm or 1 μm, respectively).3 As very small particles penetrate further into the lungs than larger particles, they are believed to be more strongly associated with adverse health effects. Diesel engine emissions contribute disproportionately to the very-small-particle fraction of urban air pollution.7

The recent documentation of lung cancer as an effect of long-term exposure to urban air pollution8 puts the spotlight on carcinogenic chemicals in the smallest air particles and on carcinogenic gases (eg, benzene; benzo-(alpha)pyrene) as possible causal agents.

Carbon dioxide (CO2), another air pollutant created by fuel combustion, has no direct health effects at the concentrations occurring in the ambient environment. However, it is the main "greenhouse gas" causing global climate change9 and, as such, indirectly contributes to the global health impact of such change. Australia and New Zealand are among the few countries where vehicle-related CO2 emissions have substantially increased since 1996, when the Kyoto Protocol on greenhouse gas reductions was signed. Efforts to reduce urban air pollution by reducing the use of cars would have the added benefit of reducing CO2 emissions.

There is an exhaustive literature on the health effects of the major air pollutants, including numerous epidemiological and toxicological studies. In a recent review,10 the American Thoracic Society (ATS) expanded its list of adverse health effects of air pollution to include not only clinical outcomes (such as hospital admissions, loss of lung function, and mortality) (Box 2), but also diminished quality of life and subclinical symptoms that may interfere with daily activities (Box 3). In any particular study, establishing whether there is an association between air pollution and one or more of the effects listed in Box 2 and Box 3 depends on exposure level, the background health status of the population exposed, and their age. Thus, some of the evidence may appear conflicting, and the ATS recommends that the effects in Box 3 should be included in future studies.10 We describe here the key epidemiological findings on the major effects of air pollution.

Most recent epidemiological studies of air pollution and mortality have used time-series analysis to relate daily mortality rates to daily air pollution levels (on the same day or previous days). However, this approach cannot be used to ascertain whether increased mortality reflects a significant reduction in life expectancy.3

A few studies have documented associations between mortality and air pollution exposure over longer periods. The Harvard "six cities" study11 involved a 14–16-year prospective cohort of more than 8000 adults in the United States, and the American Cancer Society (ACS) study collected data on over 500 000 people living in 51 different US metropolitan areas from 1982 to 2000.8,12 These studies reported significant associations between annual average particle pollution levels (PM10 or PM2.5) and annual all-cause mortality rates: an average increase of 10 μg/m3 of PM10 or PM2.5 was associated with a 3%–4% increase in mortality. The ACS study also found a significant association between levels of PM2.5 and deaths due to cardiorespiratory diseases and lung cancer.8

A "natural intervention" study with long-term exposure and effect data analysed mortality in Dublin before and after coal-burning was banned in 1990.13 The annual average particle pollution level declined by 36% after the ban, while adjusted mortality rates decreased by 15.5% and 10.3% for respiratory and cardiovascular deaths, respectively.

No long-term exposure studies have been carried out in Australia or New Zealand, but short-term time-series analyses suggest that the situation here is similar to that observed in many US and European studies. Significant associations between daily PM10, NOx and/or CO levels and daily cardiorespiratory mortality have been found in Sydney,14 Brisbane,15 and Christchurch,16 but the associations have been weaker in Melbourne17 and Perth.18

A review of epidemiological studies concluded that there may be a relationship between acute ozone exposure and increased mortality,19 especially in elderly people. However, the concurrence of high ozone levels with hot weather makes it difficult to separate the effect of heat from the effect of ozone on mortality. In Australia, ozone levels have been found to affect daily mortality rates in Sydney, Brisbane and Melbourne,15,17 but the interpretation of these results raises similar concerns to those of the recent review.19

Some studies have suggested that air pollutants are related to respiratory allergic diseases by the interaction between pollen allergens and air pollutants: air pollutants adhering to pollen grains may increase their impact, and probably also heighten airway responsiveness to aeroallergens.26

Role of the clinician

Decisions about patient management would not normally be influenced by the patient's exposure to air pollution. (The causal role of air pollution in disease is an epidemiological diagnosis.) However, the following advice may be appropriate for patients who are particularly at risk (eg, those with severe cardiac or respiratory disease):

Current levels of major air pollutants in Australian capital cities and New Zealand only occasionally exceed air quality guidelines. Particle pollution levels have remained relatively stable during recent years, while NO2 levels are only slowly declining (Box 4), as the increasing number of vehicles and kilometres driven have been mitigated by increasing use of catalytic converters (for vehicle emission reduction) and improved-quality diesel fuel.

However, the epidemiological evidence shows that air pollution, even at levels below the commonly used air quality guidelines,3,8,11 increases mortality rates.2 To reduce the burden of disease related to air pollution, Australian and New Zealand governments could choose from a range of policy options that would make the air cleaner in the long term — for example, providing support and infrastructure for increased use of public transport, walking and bicycling; popularising new vehicles with low-pollution engines; and encouraging improved efficiency of household heating and cooling devices.

From a global perspective, many developing countries are at a similar stage of industrial and urban development to Western countries 50–80 years ago, when high levels of ambient air pollution from coal-burning were common. At the household level in developing countries, promoting energy-efficient and less-polluting cooking stoves constructed from local materials would be an important step in reducing air pollution. Switching the energy source for cooking to less-polluting kerosene, gas and electricity is another solution, often out of reach for poor communities in the short term.

Worldwide, a major change in priorities is needed to steer economic development towards low-pollution policies (Box 5). 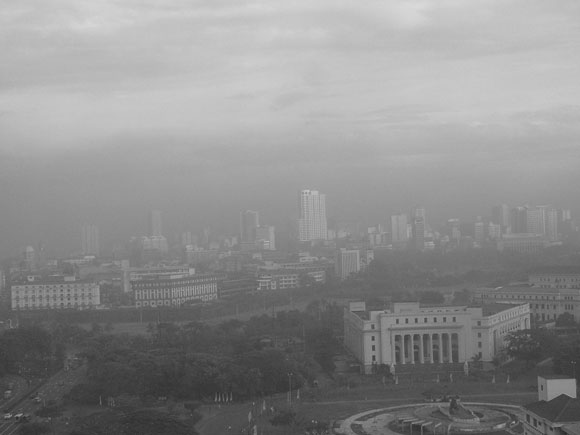 2: Selected outdoor air pollutants and their effects on health* 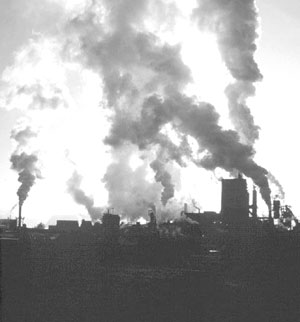 The funding for TEK's input into this article came from the Burnett Award to Professor A J McMichael, NCEPH, Australian National University.