A 63-year-old woman with hypertension and non-insulin-dependent diabetes underwent restudy coronary angiography for recurrent angina. She had had coronary angioplasty in 1991 and coronary arterial bypass surgery in 1998 with two saphenous vein grafts and a left internal mammary artery graft. Angiography of her native coronary arteries, both saphenous vein grafts, and a left ventriculogram were completed without difficulty. The left internal mammary artery was more difficult to engage selectively. The left vertebral artery, which was adjacent, was outlined by contrast. During this time the patient's blood pressure increased to 200/110 mmHg and she became nauseous and vomited. She complained that "everything has gone black". The study was terminated with a non-selective injection into the left subclavian artery, which showed an adequate left internal mammary artery graft. A total of 160 mL of non-ionic, low-osmolar contrast agent ("Ultravist") containing iopromide was used. During post-procedure monitoring she could not see light or objects and complained of headache. There was impaired alertness. Her blood pressure stabilised at 140/80–160/90 mmHg. Her pupils were equal and reactive to light. Extraocular muscle movements were normal. Funduscopy revealed "copper wiring" of hypertension without significant diabetic retinopathy. Cranial nerve, peripheral motor and sensory examinations were normal. Bilateral cortical blindness was diagnosed.

Computed tomography (CT) brain scan was performed three hours after the completion of coronary angiography. No additional contrast was used. The CT brain scan (Box 1) showed marked bilateral contrast enhancement of the occipital lobes and no evidence of a cerebral haemorrhage. Intravenous heparin treatment was commenced. By the following day, she was able to see shapes and shadows but had persistent headache and nausea. A repeat CT brain scan did not show any residual abnormality. During the next 48 hours, her vision progressively returned. She described flashing lights in her right eye and had evidence of right homonymous hemianopia. Magnetic resonance imaging (MRI) showed increased signals in the grey matter of the medial aspect of the left occipital lobe, on a background of longstanding mild ischaemic changes consistent with her age and cardiac risk factors (Box 2A). Magnetic resonance angiography (MRA) showed patency of both posterior cerebral arteries, with dilatation of branches supplying the left occipital lobe (Box 2B). Heparin therapy was ceased, as there was no evidence of acute thromboembolism or acute infarction. She fully regained her vision five days after coronary angiography.

Transient cortical blindness related to coronary angiography was first reported in 1970.1 Since then there have been fewer than two dozen cases recorded, some of which include angiography of coronary bypass grafts.2-5 This is a rare neurological complication given the widespread and frequent use of such investigations worldwide.

The incidence of cerebrovascular complications in diagnostic cardiac catheterisations and coronary angiography is low. The National Institutes of Health in America reported a rate of 0.03%,6 and the British Cardiac Society report from 34 041 patients gave an incidence of 0.06%.7 This included cerebrovascular accidents, transient ischaemic attacks and amaurosis fugax. Neither study described transient cortical blindness. Usually neuro-ophthalmologic complications of cardiac catheterisation relate to embolic phenomena or migraine.

Cortical blindness is better recognised as a complication of cerebral and vertebral angiography, with an incidence of 0.3%–1.0%,8 but as high as 4% when hyperosmolar iodinated contrast agents are used.3 However, it can occur with newer low-osmolar and non-ionic radiographic contrast media, and this potential complication is indicated in the product information.

Review of clinical information available from English language reports of transient cortical blindness after coronary angiography showed 17 cases.2-5,8-12 Thirteen of these involved men, and only four involved women, but this reflects the greater number of men who have coronary artery investigations. The average age of the patients was 58 years, and more than half (10 patients) had known systemic hypertension. Eleven (65%) had angiography of internal mammary artery grafts. Another five had additional aortography or coronary angioplasty. The volume of contrast dye used ranged from 80–400 mL. The time taken to recover normal vision varied from 15 minutes to three weeks, with an average of three days.

Selective vertebral angiography carries the highest risk of neurological complication.13-15 As the internal mammary artery used for coronary grafting is adjacent to the origin of the vertebral artery, it is likely that a direct injection into the vertebral artery occurs. The cerebral reaction is not patient-specific, as later rechallenge with contrast medium has produced no recurrence.3 Minimising the amount of dye used is also advisable.3

The mechanism of cerebral injury remains speculative. It is thought that contrast agents disrupt the blood–brain barrier in the occipital lobes and exert a neuronal toxic effect.13

The posterior cerebral circulation is known to be more susceptible to such injury and this may relate to differences in sympathetic innervation.14 There may be a relationship to hypertensive encephalopathy, a clinical syndrome which can include visual disturbances. Imaging in hypertensive encephalopathy, including eclampsia, has shown bilateral abnormalities in the occipital lobes, involving the subcortical white matter and often extending to the cortical surface.16 Reversible oedema, localised mainly to the occipital lobes, is a prominent feature.

Our patient was known to be taking drugs for chronic hypertension and had a documented acute blood pressure rise during the procedure. More than half the patients in previous reports had chronic hypertension, although the details of pressure changes during angiography have not usually been reported. Hypertensive encephalopathy is thought to result from sudden elevation of systemic blood pressure exceeding the auto-regulatory capacity of the cerebral vessels, producing regions of vasodilatation and vasoconstriction with a breakdown of the blood–brain barrier and focal transudation of fluid.16

These mechanisms seem possible in our patient, and they were supported by the results of imaging studies. There were bilateral occipital lobe changes when she had clinical cortical blindness (Box 1), representing oedema and passage of contrast across the blood–brain barrier. Cortical blindness is synonymous with bilateral homonymous hemianopia from involvement of the occipital cortex.1 When our patient was recovering and exhibiting right homonymous hemianopia, there were MRI changes in the left occipital gyrus, and differences in the calibre of the vessels on the two sides (Box 2).

It is devastating for the patient, the family and the person carrying out the procedure when cortical blindness complicates coronary angiography. Cerebral embolism and haemorrhage have to be excluded by CT scan or MRI studies. Fortunately, the condition is usually transient.

1: Computed tomography scan of the patient's brain three hours after completion of coronary angiography, when she had cortical blindness 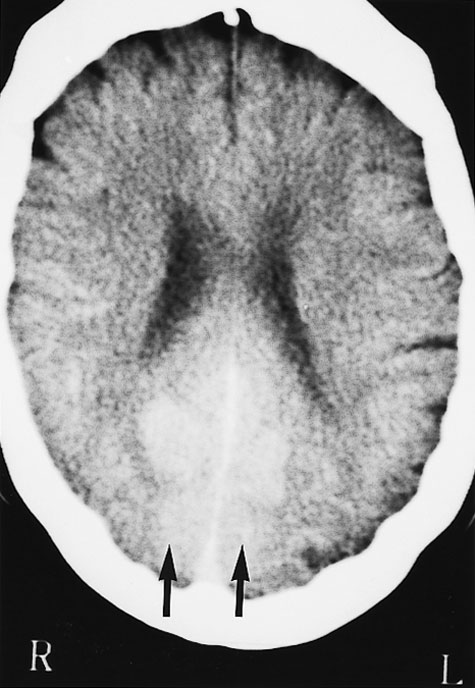 No additional contrast was given. There is marked bilateral contrast enhancement of the medial aspect of both occipital lobes in a symmetric distribution (arrows).

2: Magnetic resonance imaging (MRI) of the patient's head 48 hours after coronary angiography, when she had right homonymous hemianopia 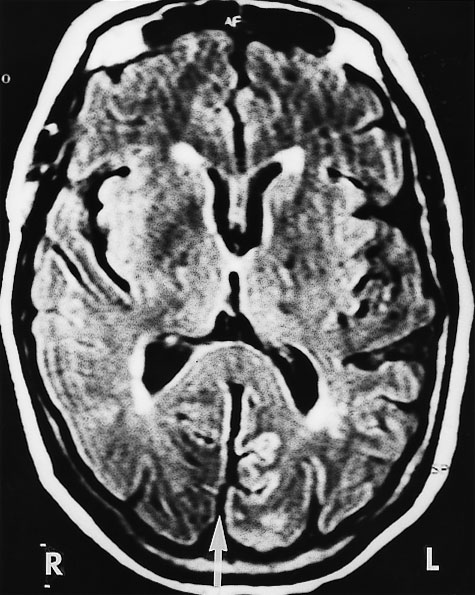 A: MRI (FLAIR image) shows increased signals in the medial aspect of the left (compared with the right) occipital gyrus separated by a fissure (arrow). Scattered foci of longstanding ischaemic damage on the rim of the lateral ventricles and frontal horns are consistent with the patient's age and risk factors. 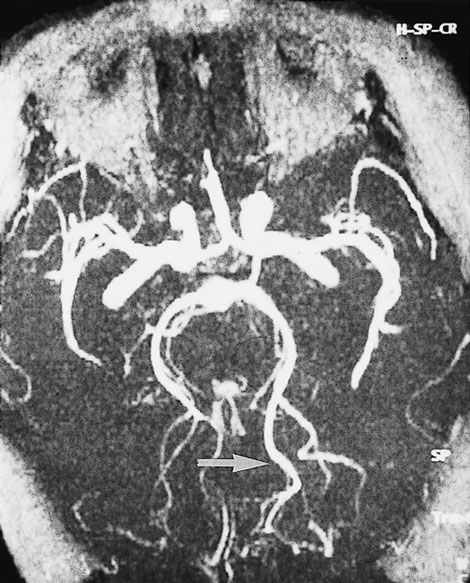 B: A magnetic resonance angiogram (MRA) at the same time shows that both posterior cerebral arteries are patent. The peripheral branches on the left side are larger (arrow).