Objective: To measure the prevalence of pain among residents of rural and regional nursing homes in northern New South Wales and to describe the procedures used for pain management.

Main outcome measures: Number of residents experiencing pain at the time of interview; sites of pain and magnitude of pain problem; diagnoses relevant to pain; analgesic prescribing patterns; non-pharmacological treatments for pain; and the extent of pain documentation in nursing records.

Results: The prevalence of pain present at interview was 27.8% (95% CI, 21.8%–33.8%). Women reported pain more often than men (31% v 21%; χ22 = 5.38; P = 0.02), but pain was not significantly associated with age, length of stay, or diagnoses of arthritis or dementia. Common sites for pain were the limbs, joints and back; 22% of residents reporting pain had no record of analgesic medication, and 16% had had no form of pain treatment ordered. Agreement between the nursing record and the residents' pain symptoms was borderline poor/fair (κ, 0.24).

Conclusions: The prevalence of pain is high among nursing home residents in rural NSW who are able to communicate their pain. Descriptive data suggest that pain management activities could be substantially improved.

Clinical experience and epidemiological evidence indicate that chronic pain of non-malignant origin is common among elderly people residing in the community or in nursing homes.1-3 Elderly Australians living in high-level-care residential facilities are dependent as a result of physical and/or cognitive impairment. Physical impairment caused by disease is often accompanied by pain, as acknowledged in the 1998 Australian federal legislation establishing outcome standards for pain management of the elderly in residential aged-care facilities.4 The Federal Government is now seeking to ensure, by an accreditation process, that the standards for pain management are met throughout Australia.

Recent surveys in other countries have estimated the prevalence of pain within nursing home populations to be anywhere between 27% and 83%.5-9 One US study reported 15% persistent severe pain among residents of aged-care facilities,10 while an Australian study by Madjar and Higgins found that 86% of residents in one nursing home were in chronic pain.11 A broader population survey of Australians in high-level care is needed to achieve more accurate estimates of pain prevalence.

The objectives of our study were to measure the prevalence of pain among nursing home residents in rural New South Wales and to describe the procedures that facilities use for pain management. Our data and survey methods are intended for use by medical officers managing nursing-home residents and by facility managers developing quality assurance programs for improving standards of pain care in residential settings in line with Commonwealth standards and guidelines.

A cross-sectional survey was undertaken in 1998–1999 among residents of 15 nursing homes (11 charity-owned, four private for-profit facilities) located in a northern NSW area health service. Of 932 residents, consent was received from 917 to participate in the study.

Consent to conduct the study was obtained from residents, extramural carers (for non-communicating residents — ie, those with severe dementia), facility managers and residents' medical officers. The survey involved audit of medical records and interviews with nursing home residents.

Outcome variables compiled from medical records were presence of a nursing record of pain, analgesic and co-analgesic medications prescribed, non-pharmacological methods of pain management, and diagnoses relevant to pain (eg, arthritis, dementia). (Data for the first three variables were based on notes recorded over the seven days up to and including the day of the survey, while diagnostic information was taken from the full medical record back to the time of admission to the facility.) Medical records were also used for general demographic data.

Outcome variables derived from interviews were present pain, site(s) of pain, and pain problem magnitude. Prior to interviews, senior nurses identified residents who were cognitively able to respond to our questions. We then sought the consent of these residents to a brief interview, in which we asked about the presence and site(s) of pain and residents' perception of the magnitude of their pain problem. We asked each participant, "Do you have any ache, pain or discomfort at the moment?" (defined in our analysis as "present pain"). We chose "present pain" as the defining measure rather than "past pain", which is an unreliable measure for assessing institutionalised elderly people given the high prevalence of dementia (16%–48% among people admitted to northern NSW nursing homes12).

In the pilot phase of our study we used visual analogue scales (VAS) to measure pain intensity. However, after observing that many residents' cognitive, visual, hearing and/or manual impairments cause difficulties in using VAS,13 we decided instead to ask a simple verbal question regarding pain severity: "Is it a big problem, medium-sized problem or a small problem?". Nearly all residents who could communicate the presence of pain were able to classify their pain problem into one of these three categories (comprising the variable "pain problem magnitude").

Attributes of pain and its treatment among the 151 residents experiencing present pain are shown in Box 2. The most common sites for pain (experienced as "severe" or "moderate") were the limbs, joints and back. There was no significant association between the presence of pain and residents' age or length of stay in a nursing home. Fifty-four per cent of participants in present pain were prescribed analgesics (ie, paracetamol) alone, while 27% received some form of physical treatment such as massage, passive movement or heat. For 22% of residents reporting pain there was no record of receiving analgesic medication, and 16% of residents reporting pain had received no treatment at all for pain. Pain relievers other than paracetamol that had been prescribed included opioids (31.8% of participants in present pain) and non-steroidal anti-inflammatory drugs (NSAIDs) (12%), and 54% of participants in present pain had a record of antidepressant use. Among communicating residents not in present pain, 66.7% (262/393) were currently being prescribed analgesics or NSAIDs.

Agreement between the nursing record of pain and residents' reporting of pain was borderline poor/fair (κ, 0.24).14 For 32% (126/393) of residents not reporting present pain, nursing notes indicated the presence of pain, while for 41% (62/151) of those in current pain there was no record of pain in the nursing notes (Box 3). Interestingly, records of the 373 non-communicating residents for the week before the survey show that nurses assessed 27% as having pain present.

Our survey results suggest that organisational efforts to comply with legislated standards for pain management are not fully meeting the requirements. Nearly 28% of nursing home residents who were able to communicate were experiencing pain of varying intensity, and nursing records show that a similar proportion of non-communicating residents were thought to be in pain.

Established pharmacological principles were not applied in using simple analgesics for chronic musculoskeletal pain — paracetamol was more often given "as needed" rather than "regularly" for those with present pain. Similarly, few residents in pain were given physical treatments, such as heat or massage, suggesting underuse of "pain management programs, including a range of interventions" requested in the Commonwealth care standards.4 In brief, our data indicate that medical practitioners attending patients in aged-care facilities could significantly improve the detection of pain simply by regularly asking whether it is present. Our study highlights the need to review medication and physical treatments for pain in rural facilities and probably in metropolitan settings as well.

A limitation of our study is that pain estimates are generalisable only to those able to communicate (ie, about 60% of residents). We believe that the way we defined pain (in terms of "ache", "pain" or "discomfort") was culturally meaningful to the participants. Pain estimates reported elsewhere have been based on various methods, including self-report, chart reviews, staff or family member perceptions, and analgesic use.5,7,11 Our 27.8% pain prevalence estimate is considered a minimal value — more complex probes with wider time frames, and those combining sources, tend to report higher pain prevalence. We also believe the concept of "present pain" has face validity and reliability as a construct that is highly vexing to measure.6,13

As our survey was not aimed at diagnosing the causes of pain, we did not attempt to describe types of pain nor explore the relationships between pain and depression or the degree of dementia. Clearly, the non-communicating residents (those with severe dementia) were not assessed for present pain. Importantly, among communicating residents, research indicates that cognitively impaired people are able to report pain experience, and that their self-reports of pain are as reliable as those of people not cognitively impaired.6

There are at least two possible reasons why there is poor agreement between pain as reported in residents' progress notes and residents' expressed symptoms. Firstly, not all residents in pain are clearly identified during nursing routines, and some are missing out on even simple management techniques that could provide relief. Secondly, disagreement could arise from comparing pain notes made over the seven days prior to the survey with residents' symptoms expressed at the time of interview. However, since most pain experienced in residential-care facilities is chronic in nature, the absence of any record of pain for a resident expressing pain at interview would appear to be a serious omission. Other researchers5,8,15 have observed that both medical and nursing staff often do not recognise and document pain in patients under their care, especially people with cognitive impairment.13,16

We believe that our survey points the way towards defining an outcome standard (benchmark) for assessing pain care in Australian nursing home residents. The act of recording pain data, in itself, has the potential to reveal unreported pain and to initiate treatment strategies. The cost implications are not clear, but managers of facilities may need to allocate additional resources to effectively measure their performance against such newly emerging benchmarks.

1: Participation and presence of pain among nursing home residents in our survey 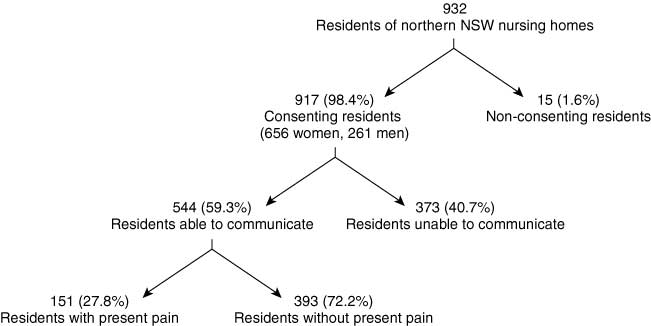