Most members of the medical profession feel stressed at some time. If stress is ongoing, impairment may occur (defined as being unable to safely or reliably perform one's role). A continuum appears to exist between functioning well, being distressed and becoming impaired, with external (environment-related) and internal (personal-related) stressors determining where an individual will lie on the continuum.

We are conducting a study which aims to determine whether distress in new medical graduates can be predicted before the graduates become impaired and unable to safely or reliably perform their role.

Our study has subsequently moved through three distinct phases.

In Phase 1 (1997), 151 interns from seven primary allocation centres (centres which employ first-year postgraduate doctors) around New South Wales were approached and specific tools were administered, at orientation and at mid-year, to assess "burnout",1 alexithymia (not being emotionally sensitive or expressive, and having externally oriented thinking),2 and social support.3 General demographic characteristics were also obtained. These data were correlated with "assessed performance" data for the interns in the study, as determined from term evaluations by their supervisor. Results from this pilot cohort suggested that alexithymia was a possible predictor of a resident in difficulty, ultimately leading to poor performance.

In Phase 2 of the study (1998), the entire NSW cohort of interns (482) from all primary and secondment allocation centres across the State were approached and the same questionnaire tools administered. Scores for two of the subscales of the Maslach Burnout Inventory — "a sense of personal accomplishment" and "emotional exhaustion" — indicated an overall moderate level of burnout among interns at mid-year (as defined in the normative data for medical practitioners supplied by the instrument publishers). This was not surprising given the high level of emotional stress traditionally associated with the intern year. However, measurements of the third subscale, "depersonalisation", indicated a high level of this component of burnout. Furthermore, significant correlations were noted between alexithymia at mid-year and both "a sense of personal accomplishment" and "emotional exhaustion". There was a negative correlation between alexithymia (mid-year) and "personal accomplishment" (r = – 0.35; P < 0.001) and a positive correlation between alexithymia (mid-year) and "emotional exhaustion" (r = 0.25; P < 0.001) (ie, alexithymia was associated with higher levels of emotional exhaustion and lower perceived levels of personal accomplishment).

This larger cohort also confirmed the presence of primary and secondary forms of alexithymia:

Primary alexithymia seemed to be particularly predictive of higher burnout and poorer performance, although induced alexithymia was also associated with a lower assessed level of performance than was the case for interns who remained non-alexithymic (Box 2).

Phase 3 of the study is currently under way. One hundred and twenty students from the University of Sydney are being tested at six different times across their final medical school year (Year 4) and the internship year. The core measurement tools have again been administered and, in addition, the General Health Questionnaire,4 the International Personality Disorder Examination (IPDE, ICD-10 module) screening questionnaire5 and the Sheehan Quality of Life questionnaire.6 A key difference from previous studies is the inclusion of a one-on-one Life Events and Difficulties Scale (LEDS)7 interview at six-monthly intervals over the two-year period.

Preliminary findings from the mid-internship LEDS interview indicate some issues that appear to promote stress mid-internship. Poor-quality supervision is a common issue and appears to relate to the unsupportive, "burnt-out" or overworked registrar or term supervisor providing inadequate supervision. Similar issues arise in situations where appropriate levels of supervision are lacking, including at some rural allocation centres, and particularly in emergency situations or at night. Lack of debriefing measures after a critical incident was another common theme, as was dealing with emotionally difficult situations, such as giving bad news. Above all, administrative support issues appear to be very significant. A sympathetic administration ameliorates many of the other problems, but an unsympathetic one heightens the level of stress experienced.

It would appear that the performance of new medical graduates is affected by their personal responses to the experience of internship. A supportive environment potentially ameliorates this performance effect.

To help students progress into the internship and minimise stress we need to: 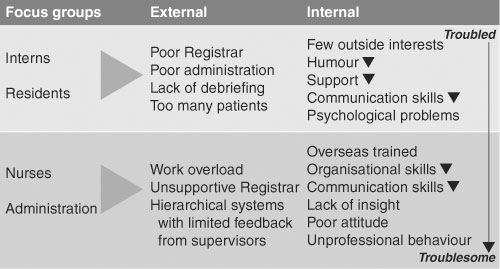 2: Presence of alexithymia* at orientation and mid-year during internship, and related performance and burnout

* Not being emotionally sensitive or expressive, and having externally oriented thinking.

This study was supported by grants from the Postgraduate Medical Council of NSW and the NSW Medical Board.