Case 1: A 46-year-old Indian man required lumbosacral (Steffee) fusion1 for chronic low-back pain after a successful laminectomy for disc herniation sciatica. Good pain relief was obtained for four weeks after the operation, and then his back pain recurred. After a brief period of symptomatic treatment, he was re-operated on at six weeks, and the metal screws and plates, which were found to be loose in the bone, were removed. The bone was noted to be softer than normal and the fusion was not sound. Swabs for infection were sterile.

The patient gave a history of long-term adherence to a vegetarian diet, as well as continuous night-shift work for 10 years with minimal sunlight exposure. He had never smoked. His 25-hydroxyvitamin D (25OHD) concentration was < 12 nmol/L (reference range, 35–155 nmol/L). The results of laboratory tests were calcium, 2.27 mmol/L; albumin, 38 g/L; phosphate, 1.33 mmol/L; alkaline phosphatase, 179 U/L (reference, < 120 U/L); and γ-glutamyltransferase, 195 U/L (< 65 U/L). The patient was taking carbamazepine, which may account for the liver function abnormalities.

Vitamin D supplementation (ergocalciferol, 2000 units daily) was commenced. Dietary calcium intake was assessed as at least 800 mg/day. Physiotherapy, initiated because of his back problems, was continued and his work was transferred to day-time shifts only. After eight weeks of treatment and sunlight exposure, the results of laboratory tests were calcium, 2.44 mmol/L; albumin, 45 g/L; alkaline phosphatase, 117 U/L; γ-glutamyltransferase, 102 U/L; and 25OHD, 125 nmol/L. Plain x-ray and computed tomography scan showed his fusion to be sound at 12 months and his symptoms to be much improved.

Case 2: A 49-year-old white woman was admitted for elective removal of metal plates (Steffee) from L2–L3 fusion two years previously. Before x-ray films were obtained, it was hoped that her fusion was sound. However, imaging had suggested the pedicle screws had loosened, contributing to ongoing low-back pain and sciatica (Figure 1). Furthermore, x-ray of the lumbar spine in flexion showed narrowing of the angle between the end-plates of L2 and L3, indicating movement posteriorly (Figure 2). At operation, all screws were grossly loose, and a bone graft placed posterolaterally had not joined to the vertebral bodies. Further bone chips were inserted, and a bone biopsy was taken. Swabs for infection were sterile. Areas of woven bone were present and the appearance of the osteoid suggested a mineralisation defect, although undecalcified sections were not available.

This patient had a four-year history of insulin-requiring diabetes mellitus, for which she also took metformin, glibenclamide and pioglitazone. Other medical problems included obesity (body mass index, 44 kg/m2), hypertension and bronchospasm, treated without long-term inhaled or systemic corticosteroids. She had never smoked. Her 25OHD concentration was < 12 nmol/L. Ergocalciferol 3000 units daily was commenced. The serum alkaline phosphatase level was normal (79 U/L). Dietary calcium intake was considered adequate. Specific questioning revealed a history of "hating the sun", and avoiding exposure to sunlight throughout her adult life. One month later, her 25OHD concentration was 27 nmol/L and the dose of ergocalciferol was increased to 4000 units daily. Six months after operation, imaging suggested that the new bone graft had become incorporated into the spine.

Figure 1: Lateral x-ray of the lumbar spine in extension. Arrow denotes a radiolucent zone at the margin of the upper screw, indicating loosening. 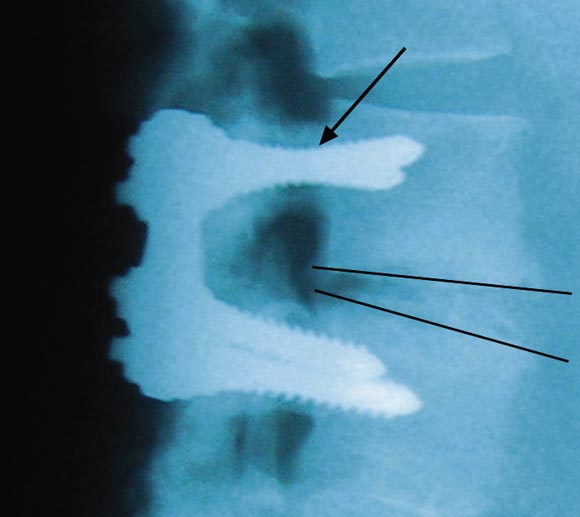 Figure 2: Lateral x-ray of the lumbar spine in flexion, showing significant narrowing of the angle between the endplates of lumbar vertebrae 2 and 3, compared with Figure 1. 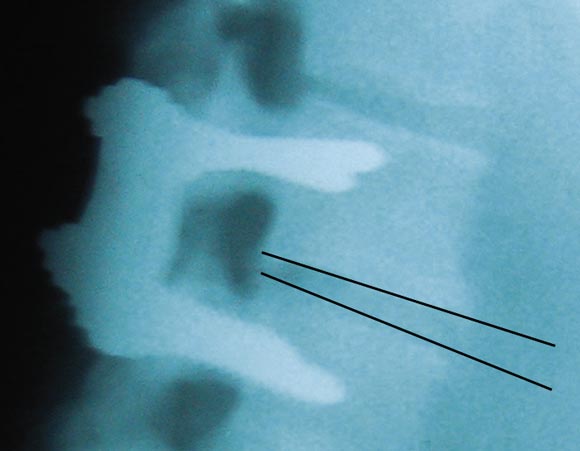 Our two patients were in their late 40s when severe vitamin D deficiency became apparent. In the first patient, recurrent pain a short time after surgery was of such severity that internal fixation plates had to be removed. The screws were loose, and, in the absence of infection, the profound vitamin D deficiency can be assumed to have resulted in failure of mineralisation of osteoid and hence failure of the surgical procedure, with resulting increased morbidity.

The second patient's bone had an abnormal histological appearance, and, despite an omnivorous diet, her choice to avoid direct sunlight for many years had resulted in profound vitamin D deficiency.

Vitamin D deficiency of the severity reported here is extremely uncommon in younger Australian adults. However, patients with long-standing orthopaedic or spinal disorders who become housebound may be particularly at risk, irrespective of their age.

The functions of vitamin D in bone metabolism are well known and its deficiency may be reconciled with the failure of spinal fusion, as described in these patients. This report highlights the need for attending surgeons and physicians to be aware of the potential for vitamin D deficiency in their patients, since failure to recognise this easily reversible problem may result in complications of treatment, including failure of spinal fusion surgery, additional morbidity and the substantial costs of further surgery and hospitalisation.