Conclusions: Our results suggest that the population of northern Sydney may have mild iodine deficiency. However, the expected relationship between maternal urine iodine levels and neonatal TSH concentrations was not found.

We recently reported that Sydney may be an area of mild iodine deficiency. This hypothesis was based on measurement, in 261 adults, of urine iodine concentration,1 which is accepted as an indicator of iodine status by the World Health Organization (WHO).2 However, we had no outcome data to confirm whether the iodine deficiency we observed was associated with any adverse consequences in this population.

To further investigate our hypothesis of iodine deficiency in northern Sydney, we assessed newborn TSH concentrations, which are assayed as part of a routine neonatal screening program.4 Here, we present data on TSH values in whole blood of a large sample of infants born at RNSH, and, for a small subset of neonates, examine the correlation between concentrations of maternal urinary iodine and neonatal TSH.

All babies in New South Wales have a heel-prick blood sample collected at least 48 hours after birth, usually on Day 3 (the birth date is Day 0), as part of the routine newborn screening program.4 WHO criteria stipulate that samples for TSH measurement should be collected 72 hours after birth5 (to avoid the physiological rise in TSH concentration which occurs immediately after birth). For our study, "Day 3" was the preferred time for sampling, but babies born in the morning may have had samples collected before 72 hours of age.

The heel-prick samples are sent to the central NSW Newborn Screening Laboratory. TSH is measured by dissociation enhanced fluoroimmunoassay (DELFIA) performed on an AutoDELFIA analyser (Wallac/Perkin Elmer Life Sciences, Turku, Finland). Samples with levels > 15 mIU/L are reassayed in triplicate; otherwise assays are performed singly. The between-assay coefficient of variation at a TSH concentration of 15 mIU/L is 6.9%, and at a TSH concentration of 59 mIU/L is 6.5%. The TSH assay can detect levels as low as < 2 mIU/L, defined as 2 SD above the mean of the lowest standard measurement.

To determine the effect on TSH values of the age of the neonate when the heel-prick sample was collected, we analysed TSH values in the subset of 84 infants in relation to (i) time of birth, and (ii) whether the infant was born before or after midday, which would influence whether the Day 3 heel-prick blood sample (which was mostly taken late in the morning) was collected after or before 72 hours of birth.

Anonymous TSH values were obtained from two groups of neonates born at RNSH between August 1998 and April 1999 (n = 1317) and between 1 March and 31 December 2000 (n = 1457) to ensure that the results were reproducible. One baby from the initial group had a blood TSH measurement of 319 mIU/L and was later shown to have permanent primary congenital hypothyroidism. This infant was excluded, leaving 1316 in the first group.

TSH values were also obtained for 84 identified babies whose mothers had been seen at RNSH between September 1998 and August 1999, most often because of gestational diabetes. None of these women had an elevated TSH concentration. Their urinary iodine level had been measured at least once during pregnancy. (If more than one sample was collected, the first was used, apart from the one exception discussed below.) This group included 64 pregnant women from our initial report,1 plus an additional 20 pregnant women who had urine samples collected between May and August 1999. To be included in the series, a complete dataset had to be available and the heel-prick sample for measurement of neonatal TSH concentration had to have been collected on Day 3 or later.

One woman with uncontrolled diabetes insipidus had a low urine iodine value. The diabetes insipidus was treated and she received dietary advice about iodine-containing foods. A repeat urine sample was collected after stabilisation 12 weeks before delivery, and the result used in our analysis.

We used SPSS for the statistical analyses.6 TSH values are not normally distributed and therefore are reported as medians with interquartile ranges. The Mann–Whitney U test was used to test for differences in the median levels of TSH between groups. Pearson's correlation coefficient (r) was used to measure the association between the natural log of TSH and other continuous variables. χ2 tests were used to test for differences between proportions.

However, this conclusion should be regarded with some caution. Firstly, the time of sample collection could have influenced the concentration of TSH. In the 84 identified infants, samples for TSH measurement were collected on Day 3, which may have been before 72 hours of life. However, we were unable to find a relationship between TSH concentration and time of birth. In those samples more likely to have been collected within 72 hours of birth, both the TSH values and the proportion of neonates with TSH concentrations > 5 mIU/L were slightly higher, but not significantly so, than in samples more likely to have been collected after 72 hours. A higher TSH level would be anticipated in the samples collected before 72 hours after birth. That the proportion of TSH values > 5 mIU/L in samples more likely to have been collected after 72 hours was still high suggests that early measurement does not fully account for the high proportion of elevated TSH values. A formal study with appropriately timed TSH sampling is required to provide a definitive answer to this question.

Another reason for caution is that the WHO criteria for iodine status do not consider the methods used to assay TSH. Data from the newborn screening quality assurance program of the Centers for Disease Control and Prevention show that different assay methods may produce different results, with variations of up to 15% at a target TSH value of 25 mIU/L among eight methods.7

The vital question "Does the borderline mild iodine deficiency found in the pregnant women account for the high proportion of infants with an elevated TSH?" cannot be answered from the data we present. Moreover, our study raises several other questions and issues. If iodine deficiency is responsible for the elevated neonatal TSH, why is the relationship between maternal urine iodine concentration and neonatal TSH concentration positive? If iodine deficiency were responsible for the higher TSH values, the expected relationship should be negative. A similar lack of the expected relationship between maternal urine iodine and neonatal TSH concentrations has recently also been found in another study.8

Many studies demonstrate the benefit of having an iodine-replete population before pregnancy.9 Iodine deficiency is the leading preventable cause of intellectual impairment.5 Maternal iodine supplementation in populations with high levels of endemic cretinism results in a reduced incidence of cretinism, without significant adverse effects.10 In populations with less severe iodine deficiency without cretinism, the benefit of iodine supplementation is not as rigorously established, although evidence from a meta-analysis of studies suggests that, with iodine supplementation, an improvement in neuropsychological functioning occurs in clinically euthyroid infants from areas with endemic goitre.11 It has been argued that cretinism is merely one end of a continuous spectrum of neuropsychological impairment induced by iodine deficiency, rather than there being a threshold above which cretinism or lesser impairment in neuropsychological development does not occur.12

Iodine deficiency impairs brain development through hypothyroidism. Pop et al have shown that the infants born to mothers who had free thyroxine concentrations below the 10th percentile before week 13 of gestation had impaired neuropsychological development at 10 months and two years.13,14 In the first 12 weeks of fetal life, before fetal thyroid development the fetus depends solely on maternal transfer of thyroxine. The work of Pop et al13,14 was performed in an iodine-replete area.

A formal study of the iodine status of NSW communities should be undertaken.15 It is of vital importance to determine if mild iodine deficiency in Australia might be contributing to subtle maternal hypothyroidism in the early part of pregnancy, with subsequent limitation of neonatal brain development. For this we need to examine the biological effects of the suspected iodine deficiency and, in particular, the biological effects relevant to pregnancy and both maternal and fetal thyroid function.

Specific questions that need to be explored are:

Hypothyroidism early in pregnancy, secondary to iodine deficiency, will only be corrected by strategies that ensure adequate iodine intake before pregnancy.16,17

2: Whole-blood thyroid-stimulating hormone (TSH) values (mIU/L) in the identified group of 84 neonates, according to whether the heel-prick sample was likely to have been collected before or after 72 hours after birth* 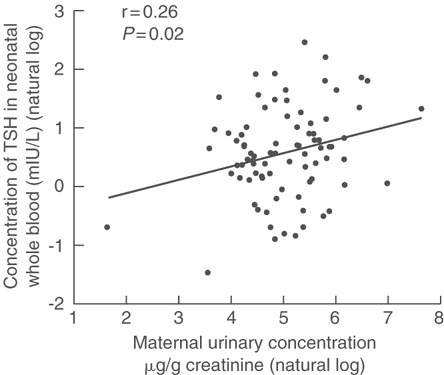