Beware the boogie board: blunt abdominal trauma from bodyboarding

Riding waves on a bodyboard, or boogie board (bodyboarding), is a popular seaside pastime. Abdominal injuries have not previously been reported from this activity. We report the cases of three adolescents who sustained major blunt abdominal injuries while bodyboarding. The three patients were seen between February 1998 and March 1999 at hospitals serving large beachside communities in Queensland. The circumstances of the accidents suggest that the method in which a bodyboard is usually ridden places a rider at risk of abdominal injury.

A 14-year-old boy was "dumped" by a wave onto a sandbank, causing his board to be driven against his upper abdomen. Over the next few hours he experienced worsening left-side abdominal pain.

On presentation, six hours after the injury, he was pale and in pain. His pulse was 120/minute and blood pressure was 110/60 mmHg. He had marked tenderness in the left upper abdominal quadrant with guarding. A computed tomography (CT) scan of the abdomen revealed a full-thickness laceration of the spleen, extending into the hilum (Box 1).

The patient was managed by active observation, and did not require surgery or blood transfusion. Subsequent scans revealed healing of his injury by three months.

A 12-year-old boy presented with abdominal pain 16 hours after being hit from behind by a large wave while attempting to ride it to shore. The nose of his board was caught on the sandy sea floor, driving one of the base corners of the board into his upper abdomen.

On examination, he was pale with a pulse of 130/minute and blood pressure of 100/60 mmHg. His abdomen was tender in the right upper quadrant with guarding. A CT scan of the abdomen revealed a large laceration to the right lobe of his liver, with a significant amount of free intraperitoneal fluid (Box 2).

The patient was observed closely in hospital for one week without adverse sequelae. Subsequent ultrasound scans showed resolution of his injury by four months.

A 15-year-old girl was thrown off balance by a wave while riding her bodyboard. She immediately experienced abdominal pain, which became increasingly severe. She recalled the board making contact with her abdomen during the fall.

On presentation, within two hours of the fall, she had severe abdominal pain, right shoulder tip pain and light-headedness when standing. On examination, her pulse was 130/minute and blood pressure was 90/50 mmHg. She had signs of generalised peritonitis and there were no bowel sounds. An ultrasound scan of the abdomen revealed a large amount of free fluid in the peritoneal cavity. No definite injury to the liver, spleen or kidneys was detected.

As gastrointestinal tract perforation could not be excluded, a laparotomy was performed. This revealed 500 mL of fresh blood in the peritoneal cavity as a result of a superficial liver laceration. Haemostasis was achieved initially by packing, and then by the application of topical thrombostatic agents. No other significant injuries were noted.

The patient made a very good recovery and was discharged home four days after admission.

There are very few reports of injuries associated with bodyboarding. A literature review revealed only one report of injuries (facial) sustained during this activity.1 There are anecdotal accounts of injuries as a result of bodyboarding misadventures, including severe spinal injuries, on bodyboarding-related forums on the Internet.2 Bodyboards can also pose a hazard to other swimmers in the surf.3

Injuries from conventional surfboarding are well documented.4-6 Lacerations make up a high proportion of surfboard-related injuries,5 reflecting surfboard design and configuration (sharp nose, fins). Blunt trauma would be expected to predominate in bodyboarding, as bodyboards have less sharp edges and have a relatively softer consistency. Bodyboarding is also more popular, especially among children and teenagers. Although many bodyboarders are very skilled (a professional circuit exists), bodyboarding is an activity in which most beachgoers can partake. The boards are readily available, and less skill and swimming ability is required to catch a wave than in conventional surfing.

As there have been no previous reports of abdominal injuries associated with bodyboarding, we are unable to determine how commonly they occur. Our experience may be unique, but, given the popularity of the pastime with young people, we suspect that this association may be under-reported.

Bodyboarders, as well as their medical attendants, need to be made aware of the potential for abdominal injuries during what most would consider a benign beachside activity. Altering the design of boards, such as rounding off the base corners or increasing the pliability of the core material, might help prevent such injuries occurring. However, this suggestion may not be welcomed by bodyboarders themselves, as it might be impossible to make such alterations without adversely affecting the performance of the boards.

1: Computed tomography scan of the abdomen of Patient 1, a 14-year-old boy 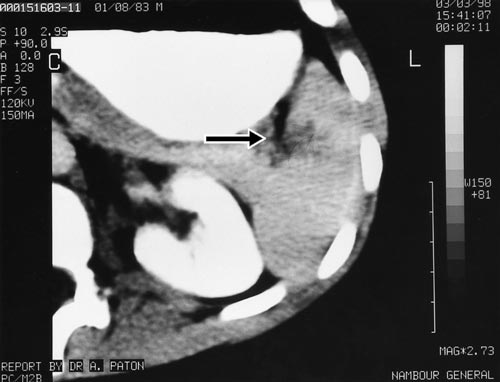 A full-thickness laceration of the spleen, extending into the hilum, is visible.

2: Computed tomography scan of the abdomen of Patient 2, a 12-year-old boy 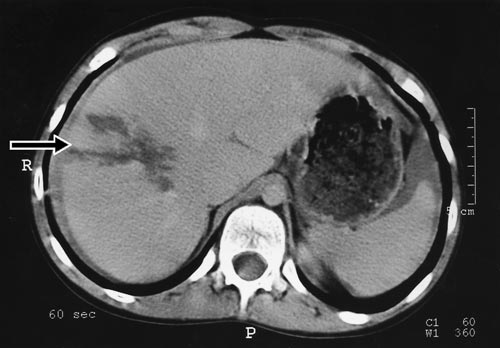 A large laceration of the liver is visible, with a significant amount of free intraperitoneal fluid.