Hyponatraemia and hypokalaemia due to indapamide

Objectives: To review Australian adverse drug reaction reports describing hyponatraemia and hypokalaemia attributed to indapamide and compare the characteristics of the patients with those in Australian reports implicating two other diuretic products (hydrochlorothiazide and amiloride hydrochloride; chlorothiazide).

Main outcome measures: Numbers of reports of hyponatraemia and hypokalaemia; proportion of such reports in total reports of adverse reactions to each drug; severity of electrolyte disturbances.

Conclusions: Hyponatraemia and hypokalaemia have been described in 20.9% and 21.7%, respectively, of reports to ADRAC in which indapamide was the sole suspected drug. The electrolyte disturbances can be severe.

Indapamide hemihydrate, a non-thiazide diuretic, is available in Australia in a 2.5 mg immediate-release (IR) formulation and a 1.5 mg sustained-release (SR) formulation. In July 2000, when it became known that supply of 500 mg chlorothiazide was to be discontinued, the 2.5 mg IR preparation of indapamide began to be promoted as a substitute for chlorothiazide. Recently, a combination product (perindopril erbumine and indapamide hemihydrate) has also been registered.

Clinically significant hyponatraemia has been attributed to indapamide as well as to the thiazide diuretics. The symptoms of hyponatraemia may begin with nausea and malaise, and progress to headache, lethargy, confusion and obtundation. Stupor, seizures and coma may occur if the serum concentration falls acutely below 120 mmol/L, or decreases rapidly.1 There is also a risk of pontine myelinolysis if the hyponatraemia is treated inappropriately.2 Hypokalaemia may result in muscle weakness and cardiac arrhythmias; symptoms generally only appear with severe hypokalaemia (less than 2.5 mmol/L).3

We undertook this study to review the reporting of indapamide-associated electrolyte disturbances in Australia. We used chlorothiazide and the combination diuretic hydrochlorothiazide (50 mg) and amiloride hydrochloride (5 mg) as comparator drugs.

The information analysed was obtained from the computerised records of Australian adverse drug reaction reports held by the Adverse Drug Reactions Advisory Committee (ADRAC). Chlorothiazide was used in Australia before the establishment of the computerised database in November 1972, and only reports received after that date were examined. The first report for the hydrochlorothiazide and amiloride combination was submitted in January 1975 and the first for indapamide in August 1984. We only considered reports in which the diuretic was the sole suspected drug.

Detailed computerised summaries of each report were retrieved, and checked against the original reports to safeguard against error during data entry. The five most commonly reported adverse reactions for each of the drugs were identified using the preferred terms from the World Health Organization Adverse Reaction Terminology.4 There was some overlap between drugs, resulting in our analysing the 11 reactions shown in Box 1. Demographic information was extracted from each report (such details were not available in only a small number of reports) and other symptoms and signs recorded in the reports were noted.

The Royal College of Pathologists of Australasia gives the following reference intervals: 5

Reports to ADRAC describing electrolyte disturbances do not always include laboratory results or reference intervals. For our primary analysis, reports describing hyponatraemia or hypokalaemia were accepted at face value.

Usage data were obtained for the three diuretics (Mr Peter McManus, Pharmaceutical Benefits Branch, personal communication) by a method in which Pharmaceutical Benefits Scheme (PBS) data and results of a survey of pharmacies are combined.6 Box 2 shows that, for the financial years 1989/90 to 1997/98, use of indapamide increased at a time when use of the other two drugs decreased markedly.

For all three drugs, at least 50% of reports described patients with serum sodium concentrations ≤ 120 mmol/L. In the 84 reports with indapamide, as well as hyponatraemia symptoms mentioned included nausea (15 reports), confusion (13), vomiting (11), dizziness (9), anorexia (8), fatigue (5), malaise (4), syncope (4), somnolence (4), headache (2) and convulsions (2). One or more of these signs and symptoms was mentioned in 39 of the 84 reports.

Indapamide has been implicated as a cause of severe hyponatraemia in a small number of case reports,7 and our findings support this. It is striking that there was a greater proportion of Australian reports of hyponatraemia with indapamide than with the hydrochlorothiazide and amiloride combination. Further, this proportion is many times greater than that for chlorothiazide. The reports show that indapamide-associated hyponatraemia resembles that caused by hydrochlorothiazide with amiloride in that it can be severe, and is reported predominantly in elderly women.8

Voluntary reporting systems do not provide a basis for calculating incidence or robust estimates of risk. The experience reported here relates almost solely to 2.5 mg IR indapamide tablets, the use of which has increased in recent years. Whether similar electrolyte disturbances will be observed with 1.5 mg SR indapamide tablets, subsidised on the PBS since 1 November 2001, requires further postmarketing surveillance.

Increasing use of indapamide in place of chlorothiazide will expose more patients to the risk of hyponatraemia. Changes in the conscious or mental states in patients, especially elderly women, taking indapamide should prompt timely measurement of the serum sodium concentration.

1: Numbers and proportions (with 95% confidence intervals) of commonly reported suspected adverse reactions in which the diuretic was the sole suspected drug 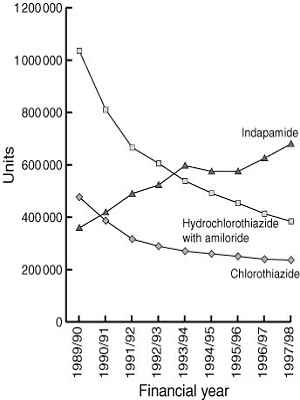