Objectives: To study the influence of different diagnostic criteria on the prevalence of diabetes mellitus and characteristics of those diagnosed.

Main outcome measure: Prevalence of undiagnosed diabetes based on each of three sets of criteria: 1997 criteria of the American Diabetes Association (ADA), 1996 two-step screening strategy of the Australian Diabetes Society (ADS) (modified according to ADA recommendations about lowered diagnostic fasting PG level), and 1999 definition of the World Health Organization (WHO).

Results: Prevalence estimates for undiagnosed diabetes using the American (ADA), Australian (ADS) and WHO criteria (95% CI) were 9.4% (8.7%–10.1%), 16.0% (15.3%–16.7%) and 18.1% (17.1%–19.1%), respectively. People diagnosed with diabetes by fasting PG level (common to all sets of criteria) were more likely to be male and younger than those diagnosed only by 2 h glucose challenge PG level (Australian and WHO criteria only). The Australian (ADS) stepwise screening strategy detected 88% of those who met the WHO criteria for diabetes, including about three-quarters of those with isolated post-challenge hyperglycaemia.

Recommended diagnostic criteria for diabetes now differ across international associations and organisations, with the American Diabetes Association (ADA) and World Health Organization (WHO) publishing new criteria in 1997 and 1999, respectively5,6 (Box 1). The American association recommends that a fasting plasma glucose (PG) test is preferable for diagnosis, while WHO recommends ideally using both the fasting PG level and 2 h PG level in an oral glucose tolerance test (OGTT).

In Australia, there has been support for continued use of the OGTT.7 Both the Australian Diabetes Society (ADS) and the Diabetes Australia Guideline Development Consortium advocate a two-step screening strategy,8,9 which involves screening people with symptoms or risk factors with a laboratory glucose measurement, preferably a fasting test, followed by a full OGTT if fasting PG values fall in the range 5.5–6.9 mmol/L. The Australian (ADS) strategy has been modified to include the lower diagnostic fasting glucose levels recommended by the American association.2,8 The American and Australian associations and WHO all emphasise the need for a second, confirmatory test in the absence of typical symptoms, such as thirst, polyuria, genital thrush and weight loss, before making a clinical diagnosis.

To evaluate these different approaches to diagnosing diabetes, we have examined their effect on the estimated prevalence of diabetes in a large Australian general practice population, using the WHO criteria (OGTT) as the gold standard for comparison.10

The study used data obtained by the Australian Diabetes Screening Study, which was undertaken between 1 December 1994 and 30 June 1995.11 It involved a survey of 50 859 patients attending 535 general practices from all Australian States to identify patients with no previous diagnosis of diabetes who were aged 40 years or over and had two or more symptoms (thirst, polyuria, weight loss, skin infections or genital thrush) or two or more risk factors for diabetes (defined as overweight, hypertension, family history of diabetes, or age over 50 years). Patients who met these criteria had a random PG measurement and, if the result was > 5.5 mmol/L, an OGTT (fasting and 2 h post-glucose PG measurement). The current study analysed results of all patients who underwent an OGTT and had complete data available.

Prevalence of diabetes in this high-risk group was calculated using each of three sets of diagnostic criteria (ADA, ADS and WHO). The Australian (ADS) stepwise screening strategy was evaluated by determining how many subjects would have been diagnosed if the 2 h post-glucose test were given only to those with fasting PG levels of 5.5–6.9 mmol/L rather than to all in this high-risk cohort.

The level of agreement in diabetes diagnoses between the three sets of criteria was evaluated by pairwise comparisons using the κ statistic (κ ≥ 0.75, excellent agreement; κ = 0.4–0.74, fair to good; and κ < 0.4, poor).12 Characteristics of patients with concordant diagnoses (diagnosed consistently by all sets of criteria) and discordant diagnoses (diagnosed with diabetes only by Australian or WHO criteria) were compared using contingency table analysis and χ2 statistics.12,13 To control for confounding and interaction, this analysis was stratified by the most significant characteristic or risk factor.

Prevalence of diabetes in this group using the three sets of diagnostic criteria is shown in Box 2, and differentiated by age and sex in Box 3. Overall prevalence increased with age using all three sets of criteria, as did prevalence in each sex, except in men using the American criteria. WHO criteria identified a greater proportion of people with diabetes than the other two sets of criteria in all age groups, particularly in the oldest group (≥70 years), and particularly compared with the American criteria.

Distribution of fasting and 2 h PG results is shown in Box 4, along with resulting diagnoses. Most patients were diagnosed consistently by the three sets of criteria: 555 (9.4%) with diabetes and 4843 (82%) without diabetes. However, the WHO criteria diagnosed an extra 513 patients (8.7%) with diabetes compared with the American criteria (comprising people with fasting PG levels < 7.0 mmol/L but 2 h post-glucose levels ≥ 11.1 mmol/L). If the 2 h post-glucose test had been performed only in those with fasting PG level in the range 5.5–6.9 mmol/L (as recommended in the Australian strategy), then 390 of these 513 patients (76%) would have been detected. Thus, the Australian strategy would have diagnosed a total of 945 people with diabetes (88% of the total diagnosed by the WHO criteria).

In this study, the WHO criteria (the gold standard) diagnosed almost twice as many people with diabetes as the American (ADA) criteria, consistent with previous findings.14 People with isolated post-challenge hyperglycaemia who were not detected by the American criteria have a high risk of microvascular complications and cardiovascular disease.15,16 The Australian (ADS) stepwise screening strategy detected 88% of those who met the WHO criteria for diabetes, including about three-quarters of those with isolated post-challenge hyperglycaemia.

Our analysis of the outcome of the Australian strategy was limited by the fact that this strategy involves a fasting PG test followed by a full OGTT (comprising a second fasting PG and 2 h post-glucose PG test), while our study involved only one fasting PG test, as part of the OGTT. This also meant that we could not evaluate patient attrition between a first fasting PG test and follow-up OGTT, estimated at 21.5%.17 In addition, our analysis included only people with random PG levels > 5.5 mmol/L, while current Australian (ADS) guidelines recommend diabetes testing, preferably by a fasting PG test, in all people with risk factors.9 Consequently, we may have underestimated diabetes prevalence using all three sets of criteria. However, we believe any effect would have been minimal, as diabetes is unlikely in people with random PG level < 5.5 mmol/L.2 In addition, our estimates of diabetes prevalence were probably slightly higher than if PG testing had been repeated, as recommended before a clinical diagnosis of diabetes is made.2,6

We found that, in the 40–59 years age group, people identified with diabetes by the criterion of fasting PG > 7.0 mmol/L (common to all sets of diagnostic criteria) were more likely to be male than those identified by the WHO criterion of isolated post-challenge hyperglycaemia. Sex differences in metabolic response to fasting have been noted by others, with men having higher fasting glucose values than women,18 and it has been suggested this may represent a systematic bias.19 We also found that people identified with diabetes by isolated post-challenge hyperglycaemia were more likely to be aged 70 years or over than those identified by fasting PG level, and less likely to be in the 40–59-years age group. Previous research has found that fasting PG level, unlike 2 h post-glucose PG level, does not increase with age,20 indicating either that fasting PG is more stable or that its sensitivity in diagnosing diabetes decreases with age.

These results lead us to support use of the OGTT in people with risk factors for diabetes. Further research, particularly cost–benefit analyses, will help clarify the role of the Australian two-step screening strategy in identifying people at risk of micro- and macrovascular complications of diabetes.

1: Diagnostic criteria for diabetes mellitus recommended by WHO (1999)4 and ADA (1997)6 for epidemiological or population screening

2: Prevalence estimates for undiagnosed diabetes among 5911 high-risk people according to different diagnostic criteria

3: Prevalence of diabetes among 5911 high-risk people, by sex and age 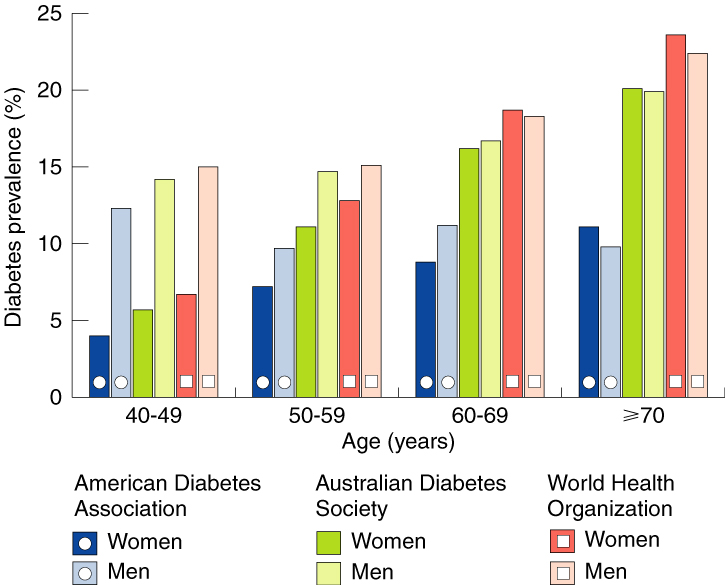 4: Distribution of fasting and 2 h plasma glucose (PG) results in 5911 people with high risk of diabetes

5: Percentage of patients with demographic characteristics, symptoms and risk factors among those with concordant and discordant diagnoses by the three sets of criteria