Objectives: To describe a cohort of survivors of childhood malignancy at risk of developing thyroid abnormality, and propose guidelines for management of such patients.

Subjects: 142 patients who had received irradiation to the thyroid from the 1970s onwards, who attended the late-effects clinic from May 1989 to December 1998.

Interventions: Thyroid palpation by an endocrinologist or surgeon, serum thyroid-stimulating hormone assay and thyroid ultrasound examination were performed on all subjects and, depending on findings, some subjects proceeded to fine-needle biopsy or surgery (total thyroidectomy). A few patients required adjuvant 131I administration.

Results: 49 subjects (24 of 65 patients who received scatter irradiation to the thyroid and 25 of 78 patients who received direct irradiation) had thyroid surgery. Of these, 12 in the scatter and six in the direct irradiation group were found to have thyroid malignancy. Fifty subjects with abnormal ultrasound results remain under surveillance. Having a palpable thyroid was predictive of malignancy, but age at original diagnosis, sex, current age, time since irradiation, radiation dose, nodule type and nodal involvement were not.

Conclusion: There is a significant risk of cancer in thyroid glands exposed to radiation as part of therapy for childhood cancer. This risk is greater for patients who received scatter (versus direct) irradiation. Nodular change is usually not apparent for many years, so lifelong surveillance is necessary. Palpation alone is not sufficient to detect thyroid cancer and thyroid ultrasound examination is recommended.

Seventy per cent of children treated for childhood malignancy survive into adulthood.1 This improved survival is accompanied by long term complications. Some oncology centres have long term surveillance clinics, but, increasingly, these survivors will be followed by general practitioners, who may not be aware of their patients' health risks.

Radiation-induced thyroid neoplasia in children is a recognised result of direct irradiation (eg, Hodgkin's disease),2,3 and of the obsolete practice of radiotherapy for benign childhood conditions.4,5 The Chernobyl reactor disaster also demonstrated the tumorigenic effect of both ingested and inhaled radioactive isotopes in childhood, with a more than 30-fold increase in the number of cases of childhood thyroid cancer.6,7

The young thyroid is vulnerable to the tumorigenic effects of radiation, and shows a linear response from 0.1 Gy levelling at 10 Gy; the excess risk persists for up to four decades.8 Although radiation therapy is now used infrequently, a large cohort of irradiated survivors remain at lifelong risk of thyroid neoplasia.

The Late Effects Oncology Clinic (LEC) is a multispecialty clinic within the Oncology Unit of the Children's Hospital, Westmead. The Oncology Unit treats about 120 new patients each year. Patients attend from all over New South Wales and are enrolled at the LEC at least five years after completion of their cancer treatment.

The thyroid doses were estimated from a retrospective review of radiation treatment data, including diagrams, photographs and simulation films. The thyroid dose received during prophylactic cranial irradiation was estimated using previously described techniques.9

Because of the wide range of doses, analysis was based on the estimated dose received by individuals rather than a group. For the purposes of analysis, dose was treated as a continuous variable.

All subjects were examined by one of three endocrinologists. The thyroid was described as palpable (diffusely enlarged or containing nodules) or non-palpable. Thyroid function tests were performed in the same diagnostic endocrinology laboratory. Some patients had received pituitary and thyroid irradiation, and thyroid function tests were difficult to interpret in these patients. All subjects underwent ultrasound examination using high-resolution linear transducers at frequencies of 7–10 MHz. Abnormal ultrasound results were reported to show single or multiple nodules.

Fine-needle aspiration biopsy was performed in 19 patients, but the results are not reported in detail because they did not influence management.

There is no consensus regarding recommendation for surgery versus ongoing observation. Surgical intervention was considered necessary for patients with larger nodules (> 1 cm in diameter), presence of multiple nodules, increasing nodule size under observation, or solid/vascular appearance on ultrasound. The presence of very small nodules (< 0.7 cm), cystic appearance on ultrasound, and reluctance or inability to proceed to surgery usually dictated continuing observation.

Microsoft Excel10 and SPSS for Windows11 were used for the analysis. Results are reported as odds ratios (OR) with 95% confidence intervals, or standard deviations where appropriate. Statistical significance was accepted at P < 0.05.

A multivariate logistic regression analysis was used to examine the relation between prognostic factors and the incidence of malignancy. Factors examined included age at original diagnosis, sex, thyroid palpability, time since irradiation, radiation dose of the thyroid, nodule type (none, single, multiple), and nodal involvement.

The study population comprised 142 subjects (70 girls). Thirty-five patients eligible to attend were not enrolled in the LEC; these patients did not differ from the entire LEC or current study group in diagnostic category or cancer therapy. The subjects' mean age was 16.0 years, and the mean age at the commencement of original therapy was 5.8 years. The mean time since completion of therapy for the study group was 14.0 years.

Some patients had received more than one course of radiation (eg, cranial irradiation followed by TBI). These individuals were considered to have received a direct dose.

Box 1 shows the main original diagnoses in the two groups. The median thyroid dose in the direct group was 20 Gy (range, 5–50 Gy). The dose was fractionated, with the exception of several patients who received the entire dose as a single fraction of TBI (7–10 Gy). The doses received by scatter were estimated at 0.1–0.5 Gy in multiple fractions.

Box 2 shows a summary of the management outcomes for the two groups. Using combined palpation data and ultrasound data, the sensitivity of a positive ultrasound result was 70%, with specificity of 91%.

In the multivariate analysis, after adjusting for various prognostic factors, the only significant predictor of malignancy was having a palpable thyroid (OR, 4.1; 95% CI, 1.2–14; P = 0.03).

Forty-nine subjects (34% of the study group; 38% and 31% for the direct and scatter groups, respectively) proceeded to surgery (Box 2). Forty-six subjects had a total thyroidectomy. Three subjects had a hemithyroidectomy (one of whom later developed nodules in the remaining lobe) performed by other surgeons.

The only important perioperative complication was transient hypocalcaemia in three patients. No subject had clinical lymph node enlargement at presentation. However, at surgery, two subjects had lymph node involvement and proceeded to a modified lymph node dissection.

Postoperatively, all subjects were treated with thyroxine at dose regimens appropriate for suppressing thyroid-stimulating hormone. In addition, 11 patients with large papillary or mixed histopathology had ablative radioactive iodine therapy following surgery (average dose, 100 mCi). At follow-up scanning, thyroglobulin levels were undetectable and there was no residual uptake in the neck.

One subject (direct group) who had a total thyroidectomy for benign nodular disease had a fatal recurrence of a medulloblastoma, 19 years after original presentation.

The first important finding of our study is the appearance of cancer in thyroid glands exposed only to scatter irradiation in childhood. Our findings are likely to underestimate overall risk given that the risk of thyroid cancer is a lifetime risk,13 that the subjects reported here are still young, and that 50 subjects with abnormal ultrasound findings remain under observation.

In a similar clinical group, nodules were detected by ultrasound in a quarter of the subjects,14 significantly lower than in our study group (70%). Ten subjects (10%) had a surgical intervention and one of these had a papillary carcinoma, both figures significantly lower than in our study. In another study of the appearance of second cancers in childhood survivors of malignancy, thyroid cancer comprised 7.5% of the secondary cancers and, although radiation did not explain all of these, a large proportion of patients in the prophylactic cranial irradiation group was noted.15 Incidental nodular disease of the thyroid is uncommon in child population studies, with a prevalence of less than 3%.16

It is possible that radiation-induced thyroid neoplasia in childhood survivors of cancer is different from neoplasia arising spontaneously. Post-irradiation cancers arise in glands with widespread histological abnormality (Box 4), as in our study and as seen in children who were exposed to radiation in the Chernobyl disaster.17 Thyroid carcinoma in children and adolescents under standard conditions has an incidence of 0.5 per million per year.18 It is also unknown whether microcarcinomas in the young thyroid previously exposed to irradiation (present in a third of our patients) have different prognosis to those in older glands, where the long term prognosis is generally favourable.19

Our study raises issues concerning both immediate management and long term surveillance of people exposed to childhood irradiation of the thyroid. Our current guidelines for management of these patients are summarised in Box 5. A further consideration is that, although therapeutic ablative doses of radioactive iodine have not produced permanent gonadal damage in young patients with spontaneous thyroid cancer,21 a gonad already exposed to chemotherapeutic damage may be at high risk of sustaining damage from 131I.

The late effects of cancer therapy are with survivors for a lifetime. Survivors of childhood cancer need to be aware of the possibility of late effects, and develop some responsibility for their own long term surveillance. Doctors need to be aware that a past history of childhood cancer does not simply represent a cure, but also future health risks.

1: Original diagnoses for children in the direct and scatter irradiation groups

2: Summary of management outcomes in patients exposed to direct (A) and scatter (B) irradiation 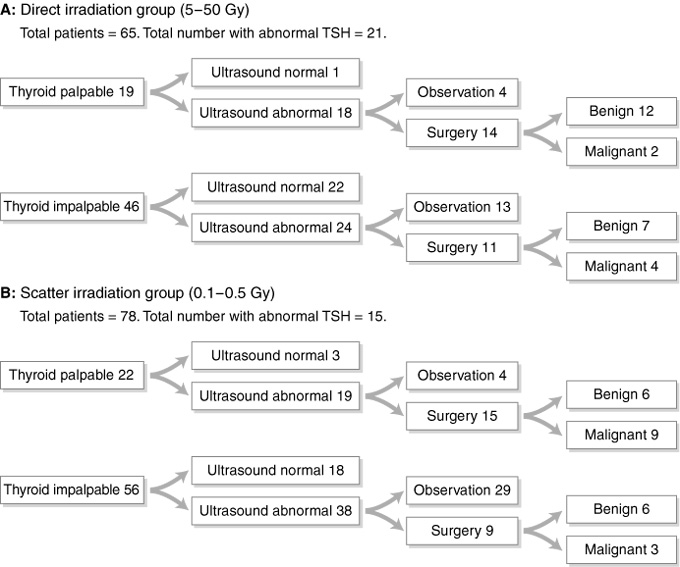 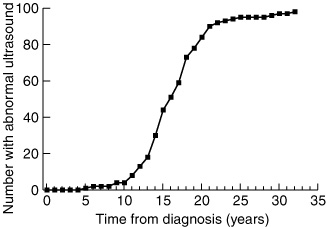 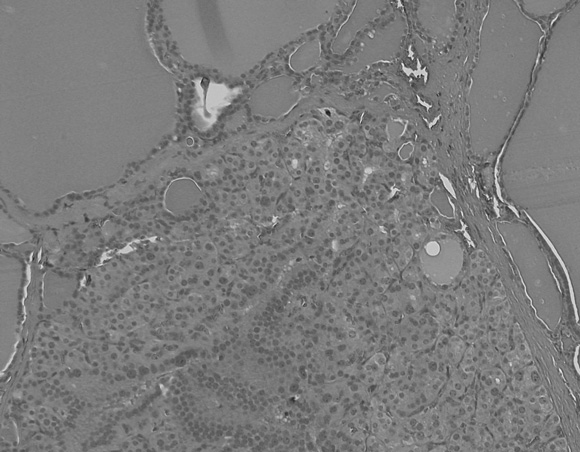 5: Guidelines for management of patients at risk of radiation-induced thyroid disease

We thank I Firth for the diagram in Box 3, L Pearson and N Stuart for assistance with data management, J Rogers for secretarial assistance, and J Phillips for the picture in Box 4.