Cosmetic enhancement is on the rise. More and more people report being unhappy with their appearance. In a 1997 US survey, 56% of women and 43% of men reported dissatisfaction with their overall appearance.1 Paralleling this trend, an increasing number of both men and women are resorting to cosmetic procedures. Figures provided by the American Society for Aesthetic Plastic Surgery reveal that cosmetic procedures (surgical and non-surgical) performed by plastic surgeons, dermatologists and otolaryngologists increased 119% between 1997 and 1999.2 In 1999, more than 4.6 million such procedures were performed, with the top five being chemical peels (18.3% of the total), botulinum toxin A injection (10.8%), laser hair removal (10.5%), collagen injection (10.3%), and sclerotherapy (9.0%). Rhinoplasties were performed on 102 943 people (2.2% of the total number of procedures), and there were 100 203 facelifts (2.2%), 191 583 breast augmentation procedures (4.2%) and 89 769 breast reductions (1.9%).2 Systematic Australian data are not readily available, as there is no central registry or reporting requirements. Furthermore, such procedures are performed by a variety of different practitioners, including cosmetic physicians, dermatologists, and plastic surgeons.

As people generally seek cosmetic interventions to feel better about themselves, one would anticipate that cosmetically successful procedures would lead to enhanced self-esteem, mood, and social confidence. While studies spanning four decades have reported that most people undergoing cosmetic interventions are satisfied with the result,3,4 what has been less studied is the outcome in psychosocial terms. Clinicians and researchers have attempted over the years to evaluate whether improvement in psychosocial wellbeing following cosmetic enhancement can be objectively verified, but few methodologically robust studies have been done.

We reviewed the literature on psychosocial outcomes following cosmetic surgery, using MEDLINE, PsychLit, PubMed, PsychINFO, Sociological Abstracts, Social Work Abstracts, Proquest 5000, Web of Science and CINAHL. Using the search terms "cosmetic surgery", "plastic surgery", "patient assessment", "body awareness", "body image" and "body dysmorphic disorder", we identified 36 studies of varying design and quality. Most were investigations of patients undergoing a specific procedure, including rhinoplasty (12 studies), breast augmentation (7 studies), breast reduction (5 studies) and face-lift (3 studies), while other studies encompassed a variety of interventions. Follow-up intervals for testing of psychosocial outcomes ranged from immediately postoperative to 10 years after the procedure (in one study). Only 11 studies formally included a control group5-15 — these are shown in the Box. Other studies have used normative data from general population samples, which may not be appropriate as reference data.

Overall, the studies suggest that most patients were pleased with the outcome and felt better about themselves. This was particularly the case for women undergoing reduction mammoplasty. Domains of functioning showing improvement included "self worth", "self esteem", "distress and shyness" and "quality of life". However, many of these studies have methodological limitations, including small sample sizes and potentially biased ascertainment. Arguably, patients who agree to participate in such research, and oblige with pre- and post-intervention interviews, represent a biased group, but none of the studies estimated the extent of such potential bias. Furthermore, clinical interviews are potentially subject to bias on the part of both the respondent and the interviewer, and very few studies employed "blind" raters. Of particular concern is that not all studies used valid assessment instruments, which hampered the interpretation of results. Finally, most studies evaluated very specific procedures, and it is unclear how generalisable their results are to other types of cosmetic intervention.

What has been even less rigorously examined is the question of what factors are associated with an unsatisfactory psychosocial outcome after cosmetic procedures. Few of the studies we reviewed formally dealt with this issue. Factors identified with unsatisfactory outcomes included being male, being young, suffering from depression or anxiety, and having a personality disorder. However, such parameters have not been studied in a rigorous manner.2 Other authors have suggested that the nature and degree of surgical change is an important predictor of outcome: more extensive ("type change") procedures (eg, rhinoplasty, breast augmentation) are more likely to result in serious body-image disturbance than "restorative" procedures (eg, face-lift, botulinum toxin A injection).16 The extent of changes in sensation following the procedure (eg, a feeling of skin tightening after a face-lift, or loss of nipple sensation after breast augmentation) may also influence psychological outcome, with greater degrees of sensory disturbance making adjustment to the procedure more difficult.17

The patient's expectation of the outcome of the procedure also appears to be important. It has been suggested that a distinction can usefully be made between expectations regarding the self (eg, to improve body image) and expectations relating to external factors (eg, enhancement of social network, establishing a relationship, getting a job).2 Some evidence points to externally directed expectations being of more concern — if the person views the procedure as a panacea for his or her life problems, the outcome is more likely to be poor.18

There is a particular subgroup of people who appear to respond poorly to cosmetic procedures. These are people with the psychiatric disorder known as "body dysmorphic disorder" (BDD). BDD is characterised by a preoccupation with an objectively absent or minimal deformity that causes clinically significant distress or impairment in social, occupational, or other areas of functioning.2 People with this disorder obsess about the perceived defect, usually for hours each day. The belief of imagined ugliness is often held with delusional conviction.19 In an attempt to alleviate their distress, sufferers may seek reassurance from others, check their appearance repeatedly in the mirror or other reflecting surfaces, pick their skin and try to conceal the "defect" through use of concealing clothing, wigs, makeup, hats, and so on.20 These patients constitute 6%–15% of patients seen in cosmetic surgery settings21,22 and about 12% of patients seen in dermatology settings.23

For several reasons, it is important to recognise BDD in cosmetic surgery settings. Firstly, it appears that cosmetic procedures are rarely beneficial for these people. Most patients with BDD who have had a cosmetic procedure report that it was unsatisfactory and did not diminish concerns about their appearance.24,25 Some patients resort to legal redress or are even violent towards the treating physician.26,27 Secondly, BDD is a treatable disorder. Serotonin-reuptake inhibitors and cognitive behaviour therapy have been shown to be effective in about two-thirds of patients with BDD.2

So, how is the cosmetic specialist to ascertain who will do poorly in psychosocial terms despite an objectively successful procedure? The literature is not terribly useful in guiding us, but certain commonsense assumptions can be made. First, the individual's attitude towards the cosmetic problem, and the distress and disability associated with it, should be assessed. In particular, the cosmetic specialist needs to determine whether the patient has BDD.28 This can be done by assessing whether the perceived defect is non-existent or slight and enquiring as to the amount of time spent each day worrying about the problem, how much distress thinking about it causes, and whether there is any resulting functional impairment (eg, social avoidance). If the patient reports being preoccupied with the perceived flaw (eg, thinking about it for at least an hour a day), and if the concern with the flaw causes marked distress or impaired functioning, BDD is likely to be present. Similarly, if the cosmetic specialist perceives the patient's cosmetic problem to be much more trivial than the patient believes it to be, suspicion should be aroused. It is also illuminating to assess the patient's expectations of the outcome of the proposed procedure in both cosmetic and psychosocial terms. Patients should be advised of what the cosmetic outcome is likely to be and fully informed of potential side effects and complications.

It is also useful to review past cosmetic interventions, including the number of previous procedures and their cosmetic and psychosocial outcome as perceived by the patient as well as family and friends. The cosmetic specialist should probably be most concerned about people who have had numerous procedures performed by many practitioners, and particularly those who report the outcome of such procedures to have been unsatisfactory. Any history of legal proceedings or threats or overt violence towards previous cosmetic specialists should obviously be considered very worrisome.

A patient's psychiatric history and current mental state should also be examined. Merely having or having had a mental illness should not of itself preclude cosmetic procedures. However, the cosmetic specialist should be aware that certain psychiatric conditions can present with heightened concern about appearance, which might resolve with adequate psychiatric treatment.2 For example, cosmetic procedures should probably not be performed on people who are depressed or psychotic or who have BDD. Referral of such patients to a mental health professional is strongly recommended.

Click here to view this table at higher resolution in a new window (400kb file). 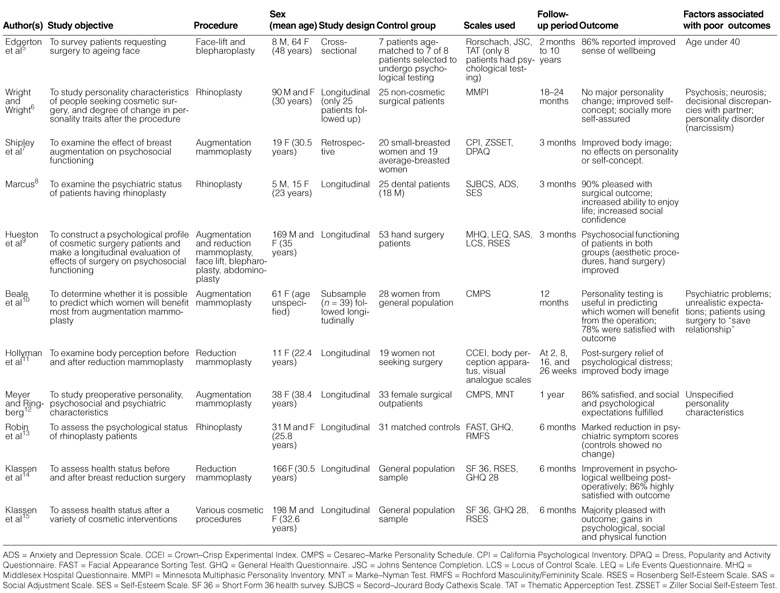