An 88-year-old man was admitted to hospital with "collapse", manifested as hypotension and fever. It was noted that he had gaze palsies.

He had been admitted for a three-day period, 12 days earlier, with a urinary tract infection, which was treated with intravenous, then oral, antibiotics. On this occasion he was again started on intravenous antibiotic therapy. He was seen by an ophthalmologist, and a cranial computed tomography (CT) scan was arranged.

A presumptive diagnosis of pituitary apoplexy was made, and the patient was commenced immediately on intravenous fluids and hydrocortisone 100 mg, 12-hourly. The CT scan (Box, B) confirmed the diagnosis, showing a pituitary tumour measuring 12 mm in diameter. The salient feature is the variegated appearance, suggesting haemorrhage within the tumour.

In patients presenting with the constellation of collapse and gaze palsies, a diagnosis of pituitary apoplexy should be considered. The mechanism of third-nerve palsy is illustrated in the Box (C). The condition is life-threatening, but responds well to appropriate treatment. After the patient had undergone hypophysectomy, the gaze palsies took about three months to resolve completely. The patient remains active on pituitary replacement therapy only. 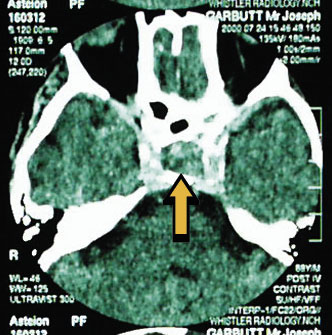 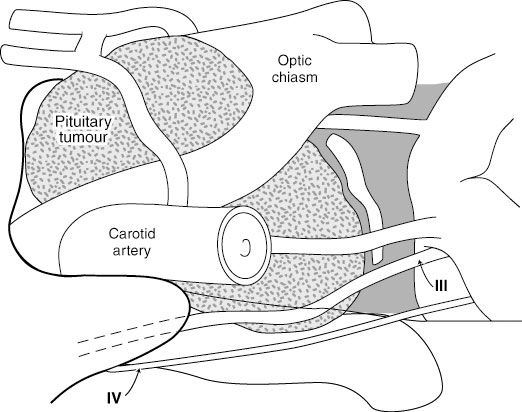 Acknowledgement: I would like to thank Dr W Ryan and the patient for allowing me to present this case.