Naltrexone in alcohol dependence: a randomised controlled trial of effectiveness in a standard clinical setting

Objectives: To determine whether naltrexone is beneficial in the treatment of alcohol dependence in the absence of obligatory pyschosocial intervention.

Interventions: Patients with alcohol dependence were randomly allocated to naltrexone (50 mg/day) or placebo for 12 weeks. They were medically assessed, reviewed and advised by one physician, and encouraged to strive for abstinence and attend counselling and/or Alcoholics Anonymous, but this was not obligatory.

Results: On an intention-to-treat basis, the Kaplan–Meier survival curve showed a clear advantage in relapse rates for naltrexone over placebo (log-rank test, χ21 = 4.15; P = 0.042). This treatment effect was most marked in the first 6 weeks of the trial. The median time to relapse was 90 days for naltrexone, compared with 42 days for placebo. In absolute numbers, 19 of 56 patients (33.9%) taking naltrexone relapsed, compared with 27 of 51 patients (52.9%) taking placebo (P = 0.047). Naltrexone was well tolerated.

Conclusions: Unlike previous studies, we have shown that naltrexone with adjunctive medical advice is effective in the treatment of alcohol dependence irrespective of whether it is accompanied by psychosocial interventions.

Naltrexone, an opioid antagonist, was introduced into Australia in 1999 for the treatment of alcohol dependence within a comprehensive treatment program. Alcohol use stimulates opioid receptors and releases endorphins in the brain,1,2 and naltrexone is thought to reduce the incentive to drink and decrease craving by blocking these pleasurable "high" effects of alcohol.3,4

The efficacy of naltrexone as a treatment for alcohol dependence has been documented in several double-blind, placebo-controlled studies.3,4,5-9 It has been found to significantly reduce the rate of relapse into heavy drinking and the number of drinking days.2,3 These predominantly North American studies also used comprehensive psychosocial programs which included coping skills supportive therapy,5,6 relapse prevention,3,4 intensive manual-guided cognitive behavioural therapy,7 adjunctive psychosocial interventions,8 and/or weekly group therapy.9

After a full history and clinical examination, patients who fulfilled entry criteria completed several self-rating questionnaires, including the Alcohol Use Disorders Identification Test (AUDIT),10 CAGE,11 and the Severity of Alcohol Dependence Questionnaire (SADQ).12 Craving was measured by the Obsessive Compulsive Drinking Scale (OCDS),13 and depression was assessed by the Beck Depression Inventory (BDI).14 Blood was taken for routine full blood count and liver function tests.

One physician (N L) followed up all patients at 1, 2, 3, 4, 6, 8 and 12 weeks after the baseline assessment. Patients who chose to continue taking naltrexone for a further 3 months were followed up on a monthly basis. Major variables recorded at each visit included clinical examination results, patients' self-reported quantity and frequency of alcohol consumption, and a structured checklist of side effects. Standardised medical advice was provided and test results were discussed in a therapeutic relationship. In addition, at 3 and 6 months after the baseline assessment, patients again completed the OCDS and the BDI, and liver function tests and a full blood count were repeated. Compliance with treatment was assessed by attendance at follow-up, tablet counts and random breath tests.

The major outcomes reported include relapse rates (defined as drinking to previous heavy levels, in excess of National Health and Medical Research Council recommendations15), time in days to first relapse, and subjective reports of side effects. Patients who did not attend follow-up and whose outcome was unknown were considered to have dropped out of the trial.

Calculations of number of participants were made based on the assumption that naltrexone, 50 mg a day taken orally over a period of 3 months, halves relapse rates compared with placebo (ie, relapse rates of 25% in naltrexone-treated patients, compared with 50% for placebo). It was calculated that 59 patients per treatment arm would be required for the study (80% power at 5% significance level).

Results were analysed on an intention-to-treat basis. Time to relapse was measured with a Kaplan–Meier lifetime survival analysis and log-rank test, with and without adjusting for confounding variables (Cox analysis). Continuous secondary outcomes were analysed by using analysis of covariance, with baseline value as the covariate. Discrete variables were compared between treatment arms using standard χ2 tests. The two-sample t-test was used to compare continuous demographic variables. To reduce skew, γ-glutamyltransferase, aspartate aminotransferase and alanine aminotransferase levels were transformed using the natural log.

A diagram of the flow of participants from enrolment to analysis is given in Box 1. The 107 participants (74 men and 33 women) had a mean age of 44.8 years (95% CI, 42.8–46.8; range, 23–70 years). There were no significant differences in age, sex ratio or demographic characteristics between the patients in the naltrexone and placebo groups (including marital status, educational level, and employment history) (data not shown).

There was no significant difference between the naltrexone and the placebo groups in attendance at the follow-up clinic or AA. However, patients who did not attend all follow-up appointments had a significantly higher risk of complete relapse (drinking to previous heavy levels) (P = 0.003) than those who attended follow-up. The number of AA attendances had no significant effect on outcomes.

One patient taking naltrexone was withdrawn from the trial before having elective surgery, and two patients taking placebo were withdrawn after hospitalisation for drug overdoses. Despite 28 days' abstinence, deterioration in liver function was observed in one of three patients with chronic hepatitis C infection. Alanine aminotransferase (ALT) levels in this patient rose from 132 U/L to 185 U/L within the first week. After the code was broken and naltrexone stopped, the ALT level rose further to 412 U/L at the end of the second week and then gradually normalised over subsequent months. Liver function test-results improved in two other patients with chronic hepatitis C who remained in the trial.

Formal counselling and supportive behavioural therapy from a psychologist or psychiatrist was offered to all patients; 33 patients (30.8%) requested this. Engagement in counselling was associated with better retention rates, the respective drop-out rates being 3/33 (9.1%) and 21/74 (28.4%) among those who did and did not engage in counselling (P = 0.046). However, this result was of borderline statistical significance. There was no significant difference in relapse rate between those who did and did not receive counselling (19/33 patients [57.5%] and 27/74 patients [36.5%], respectively).

Survival analysis showed that naltrexone 50 mg/day for 3 months was significantly more effective than placebo in preventing relapse in a mixed-sex group of alcohol-dependent patients. The beneficial effect of naltrexone was observed in the context of a standard medical outpatient clinic and was most marked during the first six weeks, suggesting a rapid onset of effect. These findings are similar to those of other double-blind, placebo-controlled studies where survival curves for time to first relapse with naltrexone or placebo showed the most marked divergence during the first 40 days of treatment.3,5,7-9

Our study follows a "real-life" treatment approach to alcohol dependence by providing pharmacotherapy and making available optional psychosocial supportive therapy in a conventional outpatient clinical setting. Counselling was taken up by only a third of our patients, and the proportion of patients who participated in counselling did not differ between the naltrexone and placebo groups. Patients who accepted counselling had higher retention rates, but relapse rates in those who did and those who did not participate in counselling showed no significant difference.

We suggest caution in generalising these results. The trial involved a relatively small number of patients. The sample size of 107 patients was less than required by the power calculation (118 patients). This was because recruitment became difficult after Pharmaceutical Benefits Scheme listing of acamprosate (Campral; Alphapharm) and naltrexone (Revia; Orphan), which meant that they were available to the public without participation in clinical trials. Additionally, preliminary analysis showed statistically significant results consistent with those reported in previous studies.3,5 It is important to note, however, that some of the non-significant results reported here may be due to lack of statistical power.

Our patients were advised to strive for abstinence and all received repeated and regular medical advice and support at each follow-up session. Advice was standardised and provided by the same physician to all the patients throughout our trial. Moreover, the advice to abstain from alcohol was reinforced with objective evidence of improvement (eg, in γ-glutamyltransferase levels and mean cell volume) for those who abstained. This could account for the significant reduction in the average alcohol intake by 84% in both the naltrexone- and placebo-treated groups. Kristenson similarly found that counselling and repeated feedback of results of measurement of γ-glutamyltransferase level led to improved outcomes in middle-aged heavy drinkers, including those with alcohol dependence.16

Naltrexone blocks some of the rewarding effects of alcohol, but it does not significantly prevent subjects from drinking any alcohol. The urge to drink more is controlled, so that studies have shown that patients taking naltrexone drink less and have increased intervals between relapses into heavy drinking.3,4 Our results are consistent with these findings.

Apart from the higher incidence of headaches in patients in the placebo group, we found no significant difference between naltrexone and placebo in reported side effects, which were generally mild. Naltrexone is reported to have the potential to cause liver damage when given in excessive doses.17 High doses of naltrexone were not prescribed in our trial. However, as one of three patients with chronic hepatitis C infection experienced liver function deterioration, we urge caution when administering naltrexone to such patients.

In conclusion, our results were obtained within the context of a medical outpatient clinic where counselling was available but taken up by only a third of patients. Unlike previous studies, we have shown that naltrexone, with adjunctive medical advice, is effective in the treatment of alcohol dependence irrespective of whether it is accompanied by formal psychosocial interventions.

1: Diagram showing flow of participants from enrolment to analysis 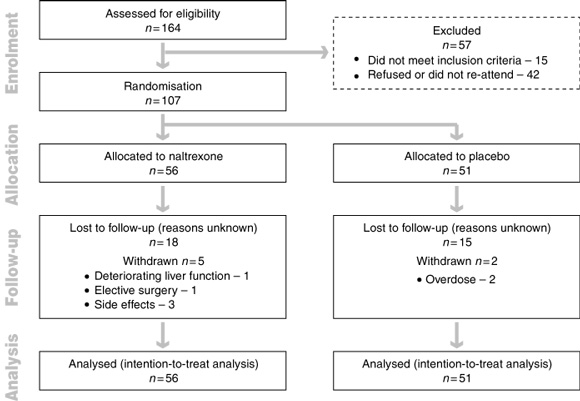 2: Patients' baseline alcohol history and clinical characteristics related to alcohol. Data are given as means (95% CI)

3: Survival curve of time to first relapse in naltrexone and placebo groups 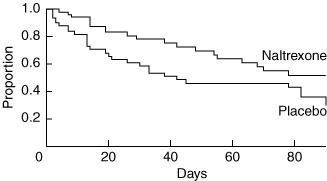 We acknowledge financial support from Northern Sydney Health, Orphan Australia, Du Pont Pharma and the Kim and Kris Morris Trust Fund for Drug & Alcohol Services. We are grateful to Professor John B Saunders and Professor Charles O'Brien for their helpful comments. We are indebted to Professor Don McNeil and Ms Shan Shan Shanley Chong, Macquarie University, Department of Statistics, for statistical analysis of data. We wish to thank Dr Harding Burns for advice and encouragement.