The patient was treated with empirical ampicillin and gentamicin, with resolution of her symptoms. However, her liver function tests worsened. Leptospiral serology was negative and blood cultures were sterile. Hepatitis A, B and C, flavivirus, Ross River virus, cytomegalovirus, Epstein–Barr virus, HIV, parvovirus and toxoplasmosis were all excluded. Negative antinuclear, mitochondrial and smooth muscle antibodies and normal immunoglobulin levels indicated that autoimmune hepatitis was unlikely.

From the fifth day after admission, her condition deteriorated, with marked upper abdominal pain and worsening liver function tests (Table). On admission to the intensive care unit she was confused, febrile (37.5°C) and tachycardic (112/min). Blood pressure was 105/70 mmHg and results of cardiorespiratory examination were normal. Right hypochondrial tenderness was present. There were no clinical stigmata of hepatic decompensation. Results of laboratory tests (Day 7) were international normalised ratio of prothrombin time, 1.7 (normal, < 1.2); lymphocyte count, 0.57 × 109/L; leukocyte count, 3.1 × 109/L; and liver function tests as shown in the Table. Renal function and platelet counts were normal.

Delivery was deemed necessary to preserve the baby's life. A live baby was delivered by caesarean section (Day 10). There were no orogenital lesions on the mother. The baby was well, with no clinical abnormalities.

After the caesarean section, the patient remained stable for 24 hours and then suffered progressive circulatory insufficiency. Despite escalating doses of vasopressors, she developed renal failure. Bilateral pneumonia and pleural effusions led to respiratory failure, and the patient was intubated for assisted mechanical ventilation. Results of liver function tests (Table) confirmed worsening of disordered hepatic synthesis, progressive hepatocellular injury and coagulopathy. An abdominal computed tomography scan revealed gross hepatomegaly, with diffuse low attenuation of the left lobe of the liver and mottling of the right lobe of the liver.

Autopsy revealed severe hepatic architectural distortion, with almost complete absence of portal tracts and central veins. The necrotic foci were more extensive than those seen at biopsy. HSV immunohistochemical stain showed cytoplasmic staining. Interstitial pneumonitis and autolysis of the kidneys were seen, with no evidence of glomerulonephritis. Viral inclusions were seen only in the liver.

Her infant was treated empirically with aciclovir and is growing and developing normally.

The commonest cause of jaundice in pregnancy is acute viral hepatitis, which can result from primary infections with hepatitis viruses A to E or as part of a systemic infection with viruses such as cytomegalovirus, Epstein–Barr virus, varicella zoster virus and herpes simplex virus (HSV).1 Except when caused by hepatitis E virus or HSV, viral hepatitis does not usually increase maternal or fetal mortality.2

Hepatitis due to HSV infection is a rare but frequently fulminant disease. Most reports have been in immunocompromised patients3 or newborns.4 Fulminant HSV hepatitis has been reported in immunocompetent adults,5-7 mostly pregnant women.8-10 Two per cent of susceptible women acquire HSV infection during pregnancy, and seroconversion can be asymptomatic.6

In our patient, liver histology and immunohistochemistry established the diagnosis. Serology, PCR and vaginal swab cultures were complementary.

Early administration of aciclovir has been successful in treating HSV hepatitis.5,7 Liver transplantation is another treatment option,11 but the risk of recurrent HSV hepatitis with overwhelming viral dissemination and concurrent enterococcal sepsis were contraindications in our patient.

A high index of suspicion for HSV infection is warranted, as hepatitis can occur without orogenital herpetic lesions. HSV serology, PCR testing for HSV DNA, and vaginal swab cultures are recommended in undifferentiated liver disorders. Liver biopsy should be considered in patients with hepatitis when a definitive aetiology is elusive. Empirical treatment with aciclovir should be considered. 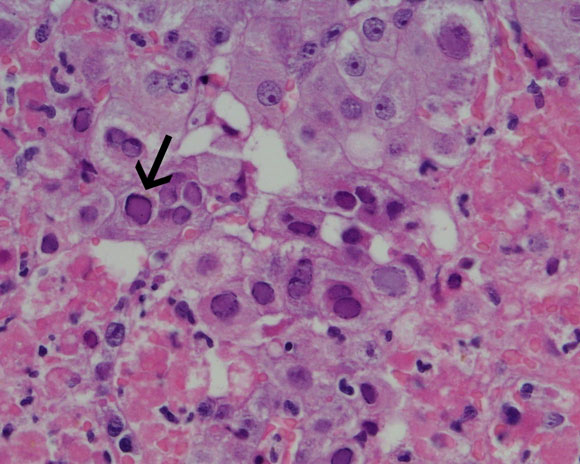 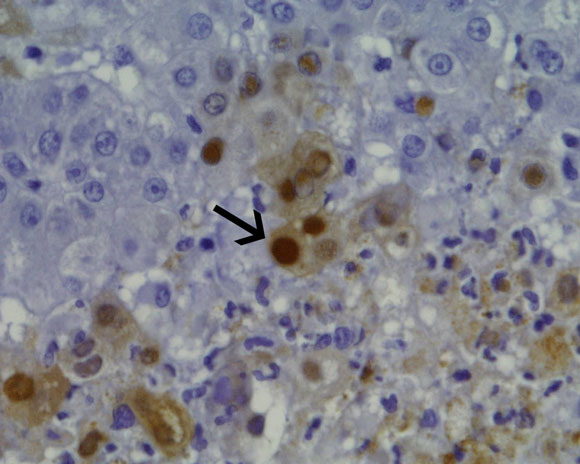