Stings from insects of the Order Hymenoptera (bees, wasps and ants) are responsible for numerous anaphylactic events, some fatal.1,2 In Australia, allergic reactions to ant stings have, until now, been caused by native ant species (eg, the jumper ant [Myrmecia pilosula and other Myrmecia spp.],3-5 the greenhead ant [Rhytidoponera metallica], Odontomachus, Cerapachys and Brachyponera spp.). Although ants are found worldwide, the only other ant species commonly reported as inducing anaphylaxis is the Red Imported Fire Ant (Solenopsis invicta Buren),6-9 which is native to Brazil, Paraguay, Uruguay and Argentina.10 This species was accidentally introduced into Alabama in the United States in the 1930s,10,11 and since then has spread rapidly throughout the southern United States, causing economic damage to crops and primary industries, reducing biological diversity, and frequently inflicting severe stings to humans.12

In February 2001, two well established populations of S. invicta ants were discovered in Brisbane (Box 1). The mode of introduction is unknown, although it may have been through the transport of infested sea cargo. It is estimated that the incursion is more than five years old. Currently, S. invicta ants are found over 37 000 hectares of the Brisbane region, covering over 64 000 homes.

Here, we describe a patient with anaphylaxis as a result of S. invicta stings, document his treatment and estimate the likely rates of anaphylaxis and mortality should these ants spread across the remainder of Australia.

A man, aged 47 years, began work as a gardener at the Port of Brisbane in November 1999. His first Red Imported Fire Ant (RIFA) sting occurred during the summer of 1999–2000. These stings resulted in acute local pain at the sting site, leading to small pustules the following day which took two weeks to heal (a typical reaction, unique to RIFA stings, which occurs in about 85% of cases).10 These reactions were quite different from previous stings by greenhead ants, which left nothing more than local puncture marks.

He was then assigned to a work party to search and destroy RIFA nests. In this task he incurred 20 to 30 separate RIFA sting events, which resulted in reactions similar to those described above.

He then received two RIFA stings on his knee at the one time. Ten minutes later, he developed extreme pruritus and burning of both feet. This was quickly followed by generalised pruritus, nasal congestion, and acute tightness of his throat and chest with dyspnoea. He was transported quickly to a nearby hospital. On arrival, a rash was present on his trunk and legs, his pulse rate was 84 beats/min, his blood pressure was 131/110 mmHg and his lungs were clear. He was given intravenous saline and 200 mg of hydrocortisone, but not adrenalin. Two hours later, he was discharged well.

A review by the Port of Brisbane's occupational physician highlighted this as a sentinel case and the causal agent was identified as RIFA. The patient's usual work duties were altered to avoid further, possibly life-threatening, RIFA stings. He was also provided with the semi-automatic adrenalin device, EpiPen (CSL, Melbourne). Avoidance measures were successful, although he subsequently sustained a number of stings from greenhead ants and wasps without adverse responses.

Skin-prick testing with the whole-body extract of S. invicta (supplied by Stallergenes, Paris, France) showed a 10-mm weal to the 1: 1000 dilution, thus confirming the occupational physician's initial diagnosis. As a consequence, he began desensitisation with S. invicta whole-body extract in accordance with accepted treatment guidelines.13 He has now reached the "maintenance phase" of the schedule (ie, 0.5 mL of the 1: 10 dilution). Subsequent to desensitisation, he reported one RIFA sting, which caused only the expected localised pustule.

Adrenalin is the first-aid treatment of choice for a systemic allergic response with dyspnoea and/or hypotension.14 It achieves the quickest reversal of the adverse events and is very safe in a life-threatening situation. Anyone who has had stinging-insect-induced anaphylaxis should carry an EpiPen (or EpiPen Jr for children; CSL) for immediate first-aid use if hypotension or dyspnoea occurs. Specific desensitisation to prevent future anaphylaxis to RIFA stings in susceptible patients is effective,13 and anyone suspected of RIFA sting anaphylaxis should be referred to an allergist for assessment.

Taxonomically, S. invicta is in a different subfamily (Myrmicinae) from that of Australian native ants responsible for anaphylactic events. Furthermore, RIFA venom is unlike that of any other Australian Hymenoptera species. As a consequence, there is a strong possibility that allergic cross-reactivity between species does not occur, as is the case in the United States. Indeed, our patient's experience would support this belief. Therefore, RIFA toxin represents a new risk to a portion of the Australian population not yet aware of this. The biology and epidemiology of S. invicta is summarised in Box 2.

In the United States, over 40 million people live in areas infested by S. invicta. Annually, 14 million people are stung, a quarter of whom are expected to develop some sensitivity to RIFA toxin.10 An examination of habitat preferences and estimates of the rate of uncontrolled spread suggest that, unless eradicated, S. invicta will occupy much of arable Australia within 30 years, and therefore exist in close proximity to a large portion of the Australian population. Only areas with extremes of aridity and cold would remain free of these ants. It is reasonable to expect that proportionally similar numbers of people will come into contact with fire ants in Australia and experience similar reactions to their stings.

A survey of 1286 practitioners in South Carolina (USA) (population, four million), where fire ants are well established,7 estimated that annually over 33 000 people (94 per 10 000 population) seek medical consultation for RIFA stings, and, of these, 660 people (1.9 per 10 000 population) are treated for anaphylaxis. Direct extrapolation of these data to the Australian situation would suggest that about 140 000 consultations and 3000 anaphylactic reactions are to be expected each year by 2030 if RIFA eradication is not successful. 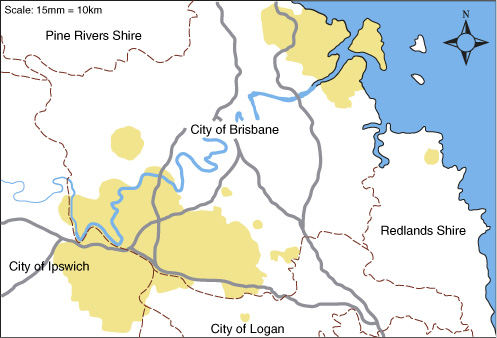 None declared. The decision to submit this article was made by us and not influenced by any funding body. G O S is in private practice and self-funded; C V is supported by the Queensland Department of Primary Industries Fire Ant Control Centre; and G K K is supported by the Port of Brisbane Corporation.