Not only is Indigenous health in Australia poor,1-4 "there is widespread agreement that knowledge about the health status of the Aboriginal population is inadequate".5 Some Indigenous health research has been of immense use in designing and evaluating interventions which have improved the health status of Indigenous people, especially at the local level.6,7 Consequently, high-quality, proactive, participatory research is needed.8,9

Because there are few Indigenous healthcare professionals and researchers in Australia, non-Indigenous researchers are involved in Indigenous research. Ensuring these researchers work in culturally appropriate and non-exploitative ways is a key concern.2,10,11 This article documents an approach that developed a partnership between researchers and Koorie communities in parts of northern Victoria and southern New South Wales. It extends previous guidelines about general research issues (cultural beliefs, language, privacy and questioning approaches)12,13 by describing how community research has been appropriately undertaken. This is more innovative, comprehensive and in addition to agreements between specific Indigenous organisations and researchers,14 for it develops a culturally sensitive and outcome-based policy for non-Indigenous researchers before partnerships are entered into.

The multidisciplinary Department of Rural Health (DRH), University of Melbourne, was established in 1999. One of its three objectives is to assist in reducing the health differential between Indigenous and non-Indigenous people.15,16 The DRH was sited in Shepparton, partly because the area has the largest Indigenous population in Victoria outside Melbourne (estimated 6000 Indigenous residents).17 This includes communities in Shepparton/Mooroopna, Barmah/Cummeragunja, Echuca/Moama, Kerang, Swan Hill and Albury/Wodonga. One community is a small town of mostly Aboriginal residents, and the others have Indigenous residents living among the non-Indigenous population. These communities have high rates of diabetes, heart disease and depression (about 40%–50% for each), compounded by huge rates of unemployment, very low completion of high school, alcohol and drug issues, low incomes and low self-esteem.18,19 Exact rates for many of these are lacking at the community level and it is likely that many unidentified health issues also exist.

Indigenous communities in this region have had negative experiences with research projects due to the lack of community control, lack of local benefits, and interpretation of data in isolation from social context.9,13,20 Therefore, a framework was developed to build a partnership between local Indigenous communities and the new academic department.

The Indigenous research framework
Establishment of the partnership committee

The Koorie Health Partnership Committee (Box 1) was established in 1999. All Koorie organisations in the region were invited to join the committee, which meets bi-monthly to identify health priorities, develop specific projects and review the activities of the DRH, communities and individual organisations. The committee has initiated projects on topics including cross-cultural issues, workforce, and a "bush tucker" project in which nutritional, cultural and legal aspects of traditional foods can be examined. Members of the partnership committee have also been on selection committees for new appointments to the department and acted as advisers to the Koorie Team.

Establishment of a Koorie Team in the department

The DRH established a Koorie Team, accountable to the partnership committee and the Koorie communities. Team members carry out tasks set by the partnership committee and work with researchers to develop programs aimed at improved Koorie outcomes. The Koorie Team has connections with the Koorie Health Research and Community Development Unit at Melbourne University and gains additional support from elsewhere within the university, but is supported mostly by the local communities.

The partnership committee recognised the need for written protocols to guide non-Indigenous members of the DRH in working within Koorie communities. In consultation, the Koorie Team developed guidelines to ensure that members of the DRH are informed of appropriate actions and negotiation within Koorie communities and organisations. The guidelines are also intended to develop trust, reinforce the integrity of the DRH and maintain robust relationships with local communities that can withstand some difficulties (eg, funding that only partially meets partnership committee objectives). The guidelines also protect non-Indigenous researchers, maintaining their neutrality.

The guidelines are based on general research guidelines, the National Health and Medical Research Council (NHMRC) Guidelines on Ethical Matters in Aboriginal and Torres Strait Islander Health Research,13 and the input of researchers and the partnership committee.

Koories work and act collectively, so each community must be consulted about any research being proposed within it. The following steps outline the appropriate consultation process.

In some projects, project organisers have held or attended community meetings to gain the perspectives of community members. In other projects, the input of local boards, the partnership committee and a project steering committee has been viewed as adequate.

Existing projects negotiated outcomes at the start of each project during community consultations, some aiming to improve the health of study participants, some to establish healthcare programs, and others to provide recommendations for existing healthcare programs.

The Koorie community and relevant Koorie organisations should remain involved in the activity throughout the entire research project, from design to implementation of outcomes.

There might be a need and resources for a local Koorie ethics committee. If this is not possible, the following local structures are likely to prevent problems arising.

In some projects, the partnership committee has had sufficient breadth to fulfil this role.

Supervision of individuals inexperienced in working in the Koorie community

A Koorie project worker or research assistant has usually been employed on projects, sometimes both a man and a woman, to work with both men and women in the community.

Koorie communities believe they have the right to own data collected in their community. However, because of the strong ties within Koorie communities, individual research participants must not be put in jeopardy in their own community for their contributions. Thus, while the community controls the use of the data and how and where they are reported, communities do not have access to individual-level data (such as an interview transcript) which might compromise confidentiality. In the past, the Koorie Team has held the data, but all reports stemming from the research are controlled by the community.

Application of the framework

Although the process appears straightforward, the complexity cannot be overstated. For example, different Koorie organisations often have different expectations of outcomes, and levels of involvement, interest and commitment. Because of the holistic nature of such research, many organisations are usually involved, with unclear boundaries and changing requests. Further, the guidelines sometimes challenge scientific procedures or call for researchers to negotiate sampling, data collection techniques and presentation of results.

The usual university ethics approval is still required.21,22 Ethics committees have agreed on requirements to date, including steering committees, employing Koories, storage of data with the Koorie Team, written consent, the role of the partnership committee, ongoing consultation and approval of all reports. Our framework extends general ethical requirements, calling for research to be culturally sensitive and accepted as necessary and useful by the communities of the participants. This gives communities the power to decide what research should be undertaken, a voice on how research is conducted, and control over presentation of the findings.

Participatory research is increasingly being used in a variety of settings among indigenous communities in Canada, the United States, Sweden, South Africa and New Zealand.2,12,23-25 The approach presented here, in conjunction with others,9,13 should provide a positive starting point for negotiation between Indigenous communities and researchers in other regions of Australia.

Rather than develop one-off Koorie research projects, the DRH has developed a framework to promote partnership with Koorie communities in research, education, employment and community development. This framework reflects the Indigenous holistic view of health and the relationship between physical health outcomes, the social determinants of health and the need to respect the integrity of each Indigenous community. Most importantly, ongoing negotiations allow flexibility within the guidelines — they are adapted to each project and allow for the development of new phases and extensions to previous projects.

As relationships between DRH and Koorie communities have strengthened, the workload for the partnership committee and Koorie Team has increased dramatically. Including Koories in most health research has meant the partnership committee and Koorie Team are involved in most research at the DRH. In addition, despite inclusive processes and openness of information, local political and family histories still raise issues. The partnership committee, Koorie Team and researchers can find themselves between conflicting family groups or perceived to favour some families or organisations over others. The challenge for outsiders to understand and address this, and for insiders to work between them while living in these communities, remains.

The growth and use of evidence for developing and implementing sustainable interventions to improve Indigenous health is urgently required. Our framework addresses the key concern of undertaking this while respecting history and Indigenous cultures.

2: Summary of how research is undertaken, using the framework of the Department of Rural Health, University of Melbourne 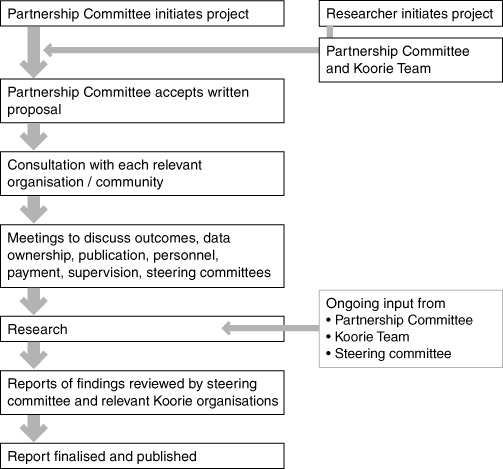 All the authors acknowledge the Koorie Health Partnership Committee (Box 1). The authors would also like to acknowledge the intellectual and cultural input from the Koorie communities who have worked with the DRH to improve health. Rick and Jan acknowledge our respective countries and connections, to Rick's Elders and ancestors of his mother's people, the Wiradjuri, and his father's, the Yorta Yorta. Jan recognises and respects the earth our mother, homage to Biami our creator and acknowledges her ancestors, Elders from her mother's people, the Nurundjeri, and her father's family connections with the Waddi Waddi and Yorta Yorta nations.