In December 1998, a 37-year-old Queensland woman died from a rabies-like illness, 27 months after being bitten by a flying fox (fruit bat). Molecular techniques enabled diagnosis of infection with Australian bat lyssavirus (ABL), the second human case to be recognised and the first to be acquired from a flying fox. It must be assumed that any bat in Australia could transmit ABL; anyone bitten or scratched by a bat should immediately wash the wounds thoroughly with soap and water and promptly seek medical advice.

The Australian bat lyssavirus (ABL) was first recognised in June 1996.1 It was subsequently shown not only to belong to a new genotype within the Lyssavirus genus, but also to be more closely related to classic rabies virus than any of the other five genotypes of lyssavirus.2

The first recognised human infection with ABL was in November 19961,3 (Box 1). The patient died from a rabies-like illness 20 days after first becoming unwell. She had apparently been bitten by a yellow-bellied sheathtail bat (Saccolaimus flaviventris; an insectivorous bat) about 4.5 weeks before onset of the illness (R Taylor, Public Health Physician, Rockhampton, QLD, personal communication). We describe here the features of the second recognised human infection with ABL, which had a much longer incubation period and was transmitted by a flying fox (fruit bat; Pteropus sp.).

A 37-year-old woman was admitted to Mackay Base Hospital in late November 1998 with a five-day history of fever, vomiting, anorexia, pain about the left shoulder girdle, paraesthesiae about the dorsum of her left hand and sore throat with difficulty swallowing.

On examination she was acutely ill but well oriented. She was unable to fully open her mouth, was drooling saliva and had difficulty speaking. She was febrile (38 degrees C) but normotensive. Muscle tone was increased, and examination occasionally provoked painful spasms. Examination of the throat provoked spasmodic attempts to swallow. Apart from neutrophilia (12.0 x 109/L; reference range, 2.0-8.0 x 109/L), routine haematological and biochemical tests gave normal results.

Twelve hours later her condition had deteriorated considerably, with increased agitation, dysphagia and dysphonia, and the muscular spasms had become more frequent and severe. She was paralysed and ventilated. At about this time, a history of a bat bite was elicited, and a diagnosis of ABL infection was considered. Cerebrospinal fluid (CSF), serum and saliva were submitted for testing.

An attempt on Day 2 of hospitalisation to cease artificial ventilation was unsuccessful; when the sedative dose was reduced, she was no longer able to communicate and did not appear to understand verbal commands. Thereafter, she remained ventilator-dependent; whenever the dose of muscle relaxants was reduced, purposeless movements, such as facial grimacing and rolling eye movements, and muscular spasms, such as arching of the back, became evident. Another prominent feature of the illness was marked fluctuations of body temperature and blood pressure.

On Day 14 of hospitalisation, the patient ceased spontaneous movements and respiratory effort. Ventilator support was withdrawn; she died 19 days after onset of the illness. Post-exposure treatment (PET) was provided to seven healthcare workers because of possible percutaneous or mucous membrane exposure to the patient's saliva.4,5

The patient had attended an evening barbecue in late August 1996, 27 months before onset of the illness (Box 1). At the function, a flying fox had suddenly landed on the back of a young child. In the course of removing it, the patient was bitten at the base of her fifth left finger.

Two days later, she presented to her general practitioner and was given tetanus toxoid and appropriate antibiotics. Six months later, in early March, she returned to the GP, asking about a blood test for the "bat virus". She was advised that she should instead receive PET because of a potential exposure to ABL, but decided against this.

As soon as the diagnosis of ABL infection was confirmed, PET was administered to the child and to four other people exposed to the flying fox at the barbecue.

Diagnostic studies
No antibodies to Japanese encephalitis (JE), Murray Valley encephalitis, Kunjin or rabies viruses were detected by enzyme immunoassay tests of serum and CSF collected on Day 2 of hospitalisation. Attempts were made to culture virus by inoculating serum, CSF and saliva onto monolayers of C636, BHK-21, Vero and mouse neuroblastoma cells, but no viruses were isolated.

Serum, CSF and saliva were examined for RNA of JE virus, Hendra virus (formerly known as equine morbillivirus) by in-house reverse transcriptase PCR, and for RNA of ABL by heminested reverse transcriptase PCR.6 No viral RNA was detected in serum or CSF, and neither JE nor Hendra virus RNA was detected in saliva. However, the heminested PCR for ABL in saliva produced amplicons of the expected size6 in both first- and second-round reactions (600 and 586 base pairs, respectively). Nucleotide sequencing showed that the amplicon was a lyssavirus-specific product that differed from any other ABL held at the reference laboratory.

Concurrently, products from the amplification were separated electrophoretically, transferred onto a nylon membrane7 and hybridised with a digoxigenin-labelled ABL-specific probe. The probe hybridised with the control virus and with amplicons generated from the saliva, indicating that the amplicons were indeed lyssavirus-specific products.

Postmortem studies
Light microscopy revealed widespread and severe encephalitis affecting all parts of the brain other than the cerebellum. Inflammation and necrosis were particularly severe in the brainstem and hippocampi, where most neurones had either completely disappeared or were necrotic. There was perivascular cuffing by lymphocytes and diffuse infiltration of grey matter neuropile by microglia and lipid-laden macrophages. Occasional neurones showed neuronophagia. A few cytoplasmic inclusion bodies were seen, particularly in the hypothalamus.

Light microscopy also revealed diffuse pancarditis with focal myocyte destruction and infiltration of epicardial nerve branches with mononuclear cells. There was no evidence of viral inclusions in acinar or ductal epithelial cells of the parotid and submandibular glands, but nerve bundles in each were infiltrated by mononuclear cells.

Spinal cord, brainstem, cerebellum, midbrain and both cerebral hemispheres were examined by immunofluorescent antibody staining. Intense fluorescence was observed in all impression smears, indicating the widespread presence of ABL (Box 2). RNA extracted from these brain samples, as well as salivary and adrenal glands, was tested for ABL by heminested PCR; all samples were strongly positive.

Portions of each tissue section were cultured with mouse neuroblastoma cells. PCR indicated successful virus isolation from brain and spinal cord after the first blind passage (Day 7 after inoculation), while specific immunofluorescent antibody staining of cells, indicating presence of ABL, was evident after the second blind passage (Day 14). Sequencing of the PCR product from the cell cultures confirmed that the isolate was the flying-fox variant of ABL.

Public health responses
As soon as the patient's diagnosis was announced in the media, requests for PET increased markedly throughout Queensland. Many requests were for exposures that had occurred many months, sometimes years, previously. Five hundred and eighteen courses were requested between December 1998 and February 1999 (inclusive), compared with 24 courses in the same three months the previous year, and 59 courses in the preceding three months (Box 3).

The clinical presentation, duration and course of the patient's illness were virtually indistinguishable from those seen in rabies. A short, non-specific prodrome was followed by inexorable progression through distinct stages, culminating, after a relatively short illness, in coma and death. Pain and paraesthesiae about the site of the bite and signs of autonomic instability, such as hypersalivation and labile blood pressure, are also commonly seen in rabies.8

Monoclonal antibody and molecular sequencing studies have shown distinct variants of rabies virus, each associated with a dominant mammalian reservoir.10 The first reported patient with ABL infection was infected with the virus variant associated with yellow-bellied sheathtail bats (A Gould, Senior Principal Research Officer, Australian Animal Health Laboratory, Geelong, Vic, personal communication), and, as expected, our patient was infected with the flying-fox variant. ABL has been found in all four Australian flying fox species, and, to date, all ABL-infected bats have been either unwell or dead at the time of collection.11

An extraordinary feature of the patient's illness was the very long (27 months) incubation period. The usual incubation period for rabies is 20-90 days, and 95% of cases occur within a year of exposure.8 Although rare, prolonged incubation periods have been reported,12,13 but the reason for the prolongation has not been established.

Media reporting of the patient's diagnosis was initially restrained but changed on her death, with some reports becoming blatantly alarmist. This media attention and the inherent concern about rabies contributed to intense public demand for PET from Queensland public health units. Although the cost of this PET was considerable, it was predominantly for "catch-up" treatments for those with historical exposures and therefore probably represents a "one-off" expense.

This case reminds that ABL infection, although rare, is lethal. Any bat in Australia must be assumed to have the potential to transmit the virus, and members of the public should therefore avoid handling bats. Anyone either bitten or scratched by a bat should immediately wash the wounds thoroughly with soap and water and promptly seek medical advice, regardless of the site or severity of the exposure.

Many people were involved in the management of the patient and in the public health responses. We wish to thank the nursing staff of the Intensive Care Unit, Mackay Base Hospital, and the Public Health Nurses, in particular Mrs Dorothy Symons, of the Tropical Public Health Unit Network. We also thank Ms Judy Northill and Mr Alan Westacott (Queensland Health Scientific Services) and Mr David Gould (Communicable Diseases Unit, Queensland Health). 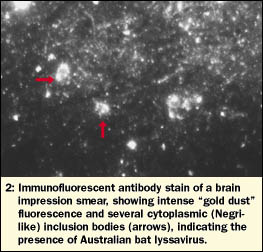