Achieving lipid targets within 12 months of an acute coronary syndrome: an observational analysis

Participants: Adult patients who had experienced confirmed ACS of cardiovascular origin, for whom serum lipid levels had been assessed on admission and six or 12 months after discharge.

Conclusion: Almost half the patients did not achieve target lipid levels within 12 months of an admission to hospital with ACS. These people are at elevated risk of recurrent cardiovascular disease, and therapy could be optimised (eg, dose escalation, drug combinations, novel therapies) to improve outcomes.

The known: Aggressive reduction of lipid levels following acute coronary syndrome (ACS) reduces the risk of recurrence. In Australia, the proportion of people who attain target lipid levels within 12 months of ACS is unknown.

The new: 45% of people admitted to hospital with ACS did not achieve recommended blood lipid levels within 12 months of discharge. Women, people under 65, and those using lipid‐lowering therapy or with elevated cholesterol levels before admission were particularly unlikely to reach targets, as were those not prescribed intensive lipid‐lowering therapy or at least four evidence‐based medications on discharge.

The implications: Optimising lipid control after ACS could include using more intensive therapy and using combinations of medications, including novel agents.

In Australia, more than 60 000 hospitalisations each year and more than 7000 hospital deaths are of people with acute coronary syndrome (ACS).1 The risk of recurrence and adverse events is very high for people who experience ACS,2 and secondary preventive strategies are consequently important. Intensive lipid‐lowering therapy reduces the risk of ACS recurrence and the associated morbidity and mortality.2,3,4

Elevated low‐density lipoprotein cholesterol (LDL‐C) levels are a major risk factor for acute and recurrent ACS: for each 1 mmol/L reduction in LDL‐C level, all‐cause mortality declines by 10% and the number of recurrent myocardial infarction events is reduced by 13%.3 HMG‐Co‐A reductase inhibitors (statins) reduce the incidence of adverse cardiovascular events during the six months after ACS by 25–40%.4,5 High intensity therapy is more effective than standard dose therapy, and the lowest ACS recurrence rates are for people who achieve the lowest LDL‐C levels.6 Further, combination statin and ezetimibe therapy achieves a 24% greater reduction in LDL‐C level than statin alone, and is associated with significantly lower cardiovascular event rates during long term follow‐up.7

Local and overseas guidelines recommend lipid‐lowering therapy for people who have experienced ACS (class 1 [strong] recommendation).8,9,10 Australian guidelines recommend that therapy be goal‐directed, with the aim of reducing LDL‐C to 1.8 mmol/L or lower or total cholesterol to 4.0 mmol/L or lower, and that patients with ACS commence intensive anti‐lipid therapy early in their index admission.10,11 However, the Cooperative National Registry of Acute Coronary Care, Guideline Adherence and Clinical Events (CONCORDANCE) reported in 2019 that only 55% of patients were using intensive lipid‐lowering therapy 12 months after discharge from hospital.12 This probably contributes to suboptimal control of LDL‐C levels in many people, but neither this nor other factors that influence whether people reach target lipid levels have been investigated in Australia.

We therefore analysed CONCORDANCE lipid levels data for people assessed six or 12 months after hospitalisation with ACS in Australia. We also examined factors associated with not achieving target lipid levels by the time of follow‐up.

CONCORDANCE was a prospective ACS registry that enrolled patients in 43 geographically diverse Australian hospitals during 2009–2018.13 Each month, participating hospitals recruited the first ten adult patients (18 years or older) admitted with ACS who had ACS‐associated electrocardiographic changes, elevated cardiac biomarkers, new or previously documented coronary artery disease, or two high risk comorbid conditions, such as diabetes and chronic kidney disease. Patients with ACS of non‐cardiovascular origin (eg, trauma, anaemia) were not recruited. Informed consent to inclusion in the registry was obtained from patients in an opt‐out process. Data on pre‐hospital management, demographic characteristics and medical history, and in‐hospital investigations and management were collected. Clinical events and reported use of prescribed therapy were assessed six months after discharge from hospital; patients recruited during 2014–2018 were also followed‐up at 12 months.

Categorical historical data missing at baseline were coded as “no” or “normal”, assuming that if it was not documented, it had not been present. Other missing data were not included in analyses. Categorical variables were summarised as counts and proportions, and the Rao–Scott test was used to correct for the clustering effect of the hospitals and to test for difference between the two groups.14 Numeric variables were summarised as means and standard deviations (SDs), and the difference between the two groups was assessed in a generalised estimating equations (GEE) model, adjusted only for the effect of hospital clustering. Factors associated with not achieving lipid targets were assessed by adjusted logistic regression within the GEE framework; covariates were included in the adjusted model according to their clinical or statistical significance in unadjusted analyses: sex, age group (under 55, 55–64, 65–73, 74 or more years), any lipid‐lowering therapy at time of admission, total cholesterol level greater than 4 mmol/L at time of admission, intensive statin therapy prescribed at discharge, and number of evidence‐based medications prescribed at discharge. In subgroup analyses, adjusted logistic regression models were recalculated using only LDL‐C or total cholesterol measurements. P < 0.05 was deemed statistically significant. All analyses were conducted in SAS 9.4.

Evidence‐based therapy before and on discharge from the index admission

Lipid‐lowering treatment at most recent follow‐up

Women were more likely than men to not reach lipid targets (odds ratio [OR], 1.54; 95% confidence interval [CI], 1.20–1.99), and people under 65 years of age were more likely than those aged 75 years or more to not achieve them. Any lipid‐lowering therapy on admission (OR, 1.51; 95% CI, 1.16–1.96), total cholesterol exceeding 4 mmol/L on admission (OR, 3.09; 95% CI, 2.36–4.04), fewer than four evidence‐based medications prescribed at discharge, and intensive lipid‐lowering therapy not being prescribed at discharge (OR, 1.61; 95% CI, 1.17–2.21) were each associated with greater likelihood of not reaching lipid targets (Box 5). Similar results were yielded by subgroup analyses restricted to the 2004 people for whom LDL‐C measurements were available (Supporting Information, table 2) or the 667 people for whom total cholesterol levels but not LDL‐C were available (Supporting Information, table 3).

We found that 45% of people hospitalised with ACS in Australia did not achieve recommended lipid levels by their most recent follow‐up (six or 12 months after discharge). People under 65 years of age, those who had used any lipid‐lowering therapy prior to hospitalisation or with higher cholesterol levels on admission, patients prescribed fewer than four evidence‐based therapies or not prescribed intensive lipid‐lowering therapy on discharge, and women were more likely to not reach lipid level targets by follow‐up.

Other cohort studies of lipid target attainment after ACS suggest that outcomes were poorer for women because they were typically older, less likely to be prescribed or to adhere to therapy, and more likely to not tolerate statins.15,16,17 Sex differences in the protective effect of high‐density lipoprotein cholesterol (HDL‐C) may cause practitioners to underestimate cardiovascular risk in women.17,18 Our secondary analysis restricted to people with LDL‐C data indicated that women were also more likely to not achieve this specific target. As LDL‐C levels are independent of those of HDL‐C, we concluded that higher HDL‐C levels did not appreciably influence whether women achieved lipid targets.

Using lipid‐lowering therapy at the time of admission was associated with not achieving target lipid levels by follow‐up, perhaps because prior intolerance or therapeutic inertia made intensifying these therapies less likely. However, several studies have found that patients using statins at the time of presentation with ACS were less likely to experience myocardial infarction or in‐hospital ischaemic complications.19,20

Prescribing discharged patients fewer than four evidence‐based therapies for ACS was associated with greater likelihood of not achieving lipid goals, suggesting a broader association between failure to provide evidence‐based care and inadequate treatment with lipid‐lowering therapies, as also documented in other studies.21,22,23

An earlier analysis of CONCORDANCE data found that 45% of people who had been hospitalised with ACS were not using intensive lipid‐lowering therapy six or 12 months after discharge.12 Our new analysis extends this finding by quantifying the impact of undertreatment on lipid levels: 16% of people who had not achieved target levels were using moderate or low dose statin therapy and 15% were on no lipid‐lowering therapy at all. This suggests that outcomes could be improved by increasing the use of evidence‐based therapy.

Further, 37% of people who did not achieve lipid targets were using high‐intensity statin therapy without ezetimibe,7 although even modest reductions in serum cholesterol levels are associated with lower rates of ACS recurrence and improved survival.3 In the United States, guidelines recommend prescribing the highest dose of lipid‐lowering agent tolerated by the patient.8 This “fire and forget” strategy contrasts with the Australian goal‐targeted approach to lipid control; our practice guidelines recommend a “treat to target” strategy, titrating anti‐lipid agents or using combinations of medications to achieve the target LDL‐C and cholesterol levels in patients at high risk of ACS recurrence.10,11 This strategy not only ensures that peoples achieve the targets, but also facilitates regular monitoring of their adherence and response to therapy and of medication intolerance.

For patients who are resistant to or do not tolerate standard lipid‐lowering medications, newer agents could also be considered. For example, a recent Cochrane meta‐analysis found high grade evidence that proprotein convertase subtilisin/kexin type 9 (PCSK9) monoclonal antibodies (eg, evolocumab, alirocumab), used as adjuncts to statin or ezetimibe therapy, reduced all‐cause mortality and the recurrence of myocardial infarction at 6‐ and 12‐month follow‐ups.24 These agents were not available during the CONCORDANCE data collection period, but evolocumab has since been approved in Australia, in combination with statins or alone for statin‐intolerant patients, for secondary prevention in people at greatest risk of recurrent events.25,26 Alirocumab is available under the Pharmaceutical Benefits Scheme for patients with familial hypercholesterolaemia.27 Inclisiran, a small interfering RNA that inhibits PCSK9 translation, was found in phase III trials to reduce LDL‐C levels by 50%. This agent, which is administered only twice a year, is not yet approved in Australia, but could revolutionise lipid‐lowering therapy, especially for people at high risk of cardiovascular disease.28

As we did not examine why people were not using high‐intensity statin therapy, we could not determine the influence of prescribing patterns and drug intolerance on lipid‐lowering therapy use. Information on use of anti‐lipid therapy at time of follow‐up relied on patient report, and was not objectively validated. Lipid level measurement methods differed between participating centres. Further, we used different criteria for lipid target outcomes (lipid, time point) according to the availability of corresponding data. We did not assess lifestyle factors that may influence LDL‐C levels in some people. Survival bias may have affected our findings, as our analysis included only patients who survived to follow‐up. Unmeasured confounders not reported or not collected from medical records by CONCORDANCE, an observational registry, may have influenced treatment and lipid levels.

During 2009–2018, about 45% of people admitted to hospital in Australia with ACS did not achieve target serum lipid levels within 12 months of discharge, including a considerable proportion of people prescribed intensive statin therapy on discharge. Women, and people not prescribed intensive lipid‐lowering therapy or at least four evidence‐based medications on discharge from hospital were particularly unlikely to meet lipid targets. Optimising lipid levels in people at high risk of recurrent ACS could be achieved by dose escalation, combination therapies, and the adoption of newer lipid‐lowering agents. 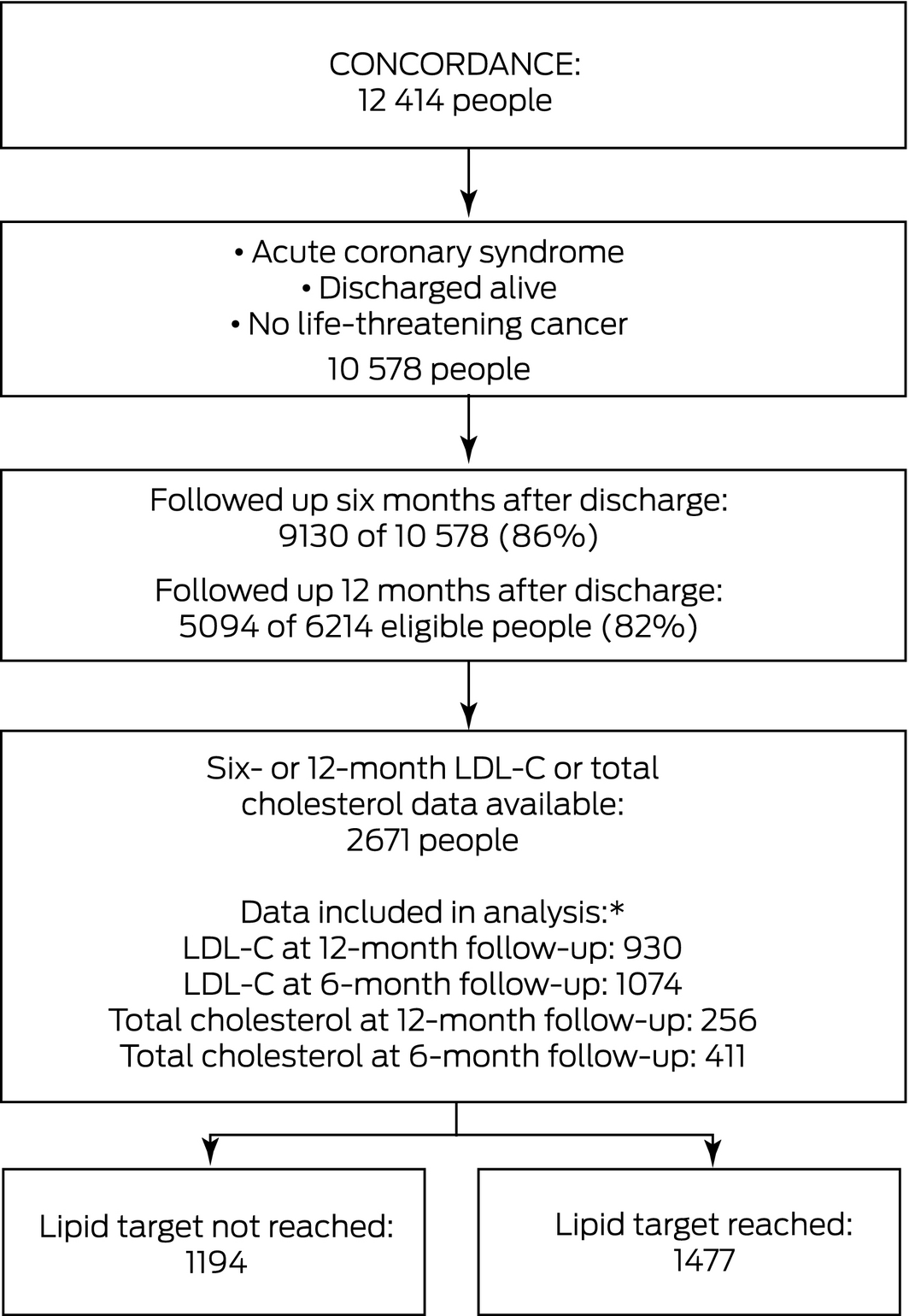 LDL‐C = low‐density lipoprotein cholesterol. * Data types are listed in order of preference for our study; that is, data were included from the highest category for which they were available.

Box 2 – Demographic and medical characteristics of 2671 patients at the time of their admission to hospital with acute coronary syndrome, by achievement of lipid target

Box 5 – Influence of selected factors on not achieving lipid targets by most recent follow‐up after admission with acute coronary syndrome: multiple logistic regression*

CI = confidence interval. * Based on data for 1039 people who achieved and 867 who did not achieve the lipid target; data for 760 people were missing because total cholesterol level at admission was not available, and for five because age data were not available.