Objective: To determine any impact associated with changes to liquor licensing regulations on emergency department attendances for alcohol-related serious injuries in an inner-city entertainment precinct.

Main outcome measures: Critically or seriously injured emergency presentations that were identified as related to alcohol use.

Results: In the 2-year study period, there were 13 110 triage category 1 and 2 presentations to the St Vincent’s Hospital emergency department: 6467 during period 1 and 6643 during period 2. Of these, 1564 (4.3%) were patients who presented with alcohol-related serious injuries: 318 (4.9%) during period 1 and 246 (3.7%) during period 2 (P < 0.05). The proportion of alcohol-related serious injury presentations (triage categories 1 and 2) was much higher (9.1% of presentations) during the high alcohol time (HAT; 6 pm Friday to 6 am Sunday) than during the rest of the week (3.1%). After the introduction of the regulatory changes, there was a significant decrease in the number of seriously injured patients during HAT, from 140 presentations (10.4% of presentations) before the change to 106 (7.8%) after their introduction, a relative reduction of 24.8% (P < 0.05). There was a small increase in the number of patients presenting with alcohol-related injuries between 9 pm and midnight.

Conclusions: There was a significant reduction in the number of alcohol-related serious injury and trauma presentations to the emergency department in the 12 months after the introduction of the new liquor regulations. This change was seen throughout the week, but was especially marked at weekends.

A number of recent studies have reviewed aspects of the complex questions associated with alcohol consumption, particularly with the misuse of alcohol.1-4 The impact of alcohol on emergency services has also been examined.5-10 It was found that drinking a single glass of wine doubled the risk of presentation to an emergency department; after three glasses, there was a 5-fold increase.11 The same study found that, after 10 standard drinks, the risk of needing to attend an emergency department was increased 10-fold for men and 14-fold for women.

There have been few well designed studies of alcohol-related injuries, and they often rely on emergency department data. Although of some value, such data have significant limitations if not collected prospectively and their acquisition appropriately resourced.12

On 24 February 2014, the New South Wales Government introduced changes to liquor regulations in the central district of the City of Sydney, the so-called “party precinct”. These legislative changes were enacted in response to community outrage after a series of adverse events reported in the media, particularly the deaths of two young men associated with alcohol-fuelled violence.

Many of the changes were based on successful strategies in the nearby Australian city of Newcastle, which had experienced similar alcohol-related serious injury problems.7,8 Some of the core changes are listed in Box 1. Several other, possibly key, initiatives were introduced in Sydney during the first year of the changed regulations. These included:

In addition to the legislative changes, volunteer nocturnal patrols, usually under the auspices of non-government organisations, also commenced activities in the precinct.

Some of the initiatives were controversial in both the medical literature and the broader media.7-9,13 Our study was undertaken to assess the impact of these measures on alcohol-related serious injury, and also to determine the possible impact on emergency services in the relevant catchment area. Our study is timely in view of the review process currently being undertaken by the Australian Government on the impact of the lockout laws.14

To determine whether the strategy adopted to reduce alcohol-related injury in central Sydney has been successful, we undertook a 2-year retrospective analysis of alcohol-associated serious presentations to the emergency department of St Vincent’s Hospital, a major teaching hospital in the heart of the area where the changes were instituted. We analysed patient data stored on the hospital’s emergency department patient information computer system (EDIS).

Our search was restricted to persons with injuries classified under Australasian triage categories 1 and 2, as our attention was focused on the seriously or critically injured (Box 2). De-identified, routinely obtained demographic data included time and day of the week of the relevant injury. Other key data fields that were extracted and analysed were presenting symptoms and triage assessment.

In order to identify patients injured by serious assault, but also those suffering other serious injuries and major traumas associated with alcohol (such as vehicular and pedestrian injuries, or falls from a height), the presenting symptoms, triage assessment and diagnosis of all patients who presented as a result of serious trauma during the periods of analysis were examined for any reference to alcohol. All patients identified in this manner were included in this study.

The Fisher exact test was used to compare categorical outcome data, with statistical significance defined as P < 0.05. Confidence intervals (95%) for proportions were calculated with the standard assumption of normally distributed logarithms of the relative risk. There were no missing data for the analysed variables. Data analysis was performed with Stata 13 (StataCorp).

During the 2-year study period, there were 13 110 Australasian triage category 1 and 2 presentations to the St Vincent’s Hospital emergency department: 6467 patients during period 1 and 6643 during period 2.

These trends were even clearer when analysis was restricted to HAT (Box 5). During this time period, large reductions in serious injuries associated with alcohol-related violence were seen after 1 am.

Our analysis has identified some significant positive results that followed the 2014 changes to the liquor laws and associated measures.

The clear decrease in serious injuries related to alcohol took some time to occur (Box 3); the gradual implementation of the policies may have led to a delayed decline in alcohol-related serious injuries. The small increase in alcohol-related injuries between 9 pm and midnight after the changes were introduced may have been related to increased alcohol intake earlier in the evening (“preloading”), before the times when the various bans take effect; the 1 pm spike may reflect lunchtime alcohol consumption.

The new measures were focused on curbing excessive drinking and violent behaviour after midnight, which could also explain some of our findings. Other indicators outside the scope of this study also support the success of the combined measures during their first 12 months of operation. Neurosurgeons at St Vincent’s Hospital reported a decrease in the numbers of patients presenting between 8 pm and 8 am with serious head injuries, which often require immediate surgery, from 26 patients during period 1 to 11 in the 12 months after the changes. Intensive care use also decreased; notably, there was not a single admission associated with alcohol-related violence during the first New Year’s Eve after the changes.16 The NSW Bureau of Crime Statistics reported a 32%–40% drop in assaults across the CBD Entertainment Precinct, and there was no increase in the number of assaults in neighbouring police command areas during the 12 months after the changes.17

There is significant controversy and discussion about which elements of the interventions may have been effective. Because of the non-specific nature of the data recorded, our study could not examine the effects of individual measures. The cost–benefit relationship of changes introduced to reduce alcohol-related serious harm has also been debated, as income, jobs and businesses have been lost as a result of the changes.4,10 This is especially relevant because the NSW Government is reported to be considering widening the regulations to include other geographical areas.

The precise costing of any reduction in the need for hospital care can be difficult,18 but the resources needed to treat critically ill, seriously injured patients, often after regular operating hours, and other associated costs are significant. The burden to both the patient and the community must be considered alongside the morbidity and mortality data.1,19

There are many limitations inherent to this and similar studies.8-10,13 Our methods cannot accurately capture complete data on the intake of alcohol. They rely on voluntary information provided by the patient and enquiries by health care workers; the information is recorded as free text in the EDIS system, without specific details about a number of relevant factors, such as the precise details of the reported injury or accident. The involvement of alcohol in trauma cases is almost certainly underestimated to a considerable extent, as blood alcohol testing may not be routinely undertaken in all unconscious or severely injured patients. Further, it was beyond the scope of our study to correct for potentially relevant demographic or ecological variables during the period of the study, such as population volumes.

Published research on acute alcohol harm relies heavily on information from emergency departments.5,11,20 This approach to data collection is not methodologically designed, and, being retrospective, is especially limited when trying to establish any causal relationships. In response to this, an Australia-wide research and data collection initiative has been established, and this collaboration between researchers, health organisations and the Australasian College of Emergency Medicine should facilitate a formal, more robust approach to data collection (personal communication, Associate Professor Peter G. Miller, School of Psychology, Deakin University, June 2015).

This study found a significant decrease in the number of patients presenting to a major trauma and teaching hospital with critical or seriously injuries related to alcohol use following the 2014 changes to regulations in the inner-city precinct of Sydney, Australia. The reduction was most marked in the period after midnight, which corresponds with the main thrust of the changed regulations.

Box 3 – Alcohol-related serious injury presentations to the emergency department of St Vincent’s Hospital, Sydney, by calendar month, before and after changes to alcohol regulations. 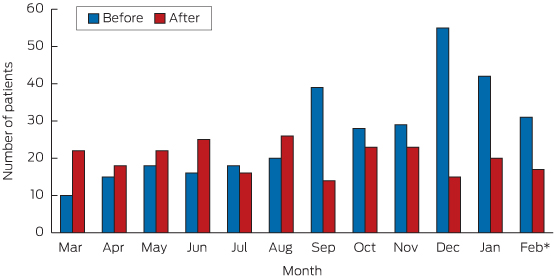 Box 4 – Alcohol-related serious injury presentations to the emergency department of St Vincent’s Hospital, Sydney, by hour of day before and after changes to alcohol regulations

Box 5 – Alcohol-related serious injury presentations to the emergency department of St Vincent’s Hospital, Sydney, on weekends, by hour of day