Results: During the study period, 1490 structured interviews were conducted, and 279 written questionnaires were returned (overall response rate, 66.4%). There were no adverse events. There were 378 recorded incidents. The incident rate was 213.7 incidents per 1000 MET participant attendances (95% CI, 194.8–233.5), and 1.1 incidents per MET call. Using the severity assessment code, 99.5% of incidents were classified as minimum. The most commonly reported incidents were disruptions to normal duties, ward rounds, and patient reviews. Only 0.8% of incidents were reported on institutional incident reporting systems.

Conclusion: Significant disruption to normal hospital routines and inconvenience to staff occurred, without causing major harm to patients, when MET staff temporarily left normal duties to attend MET calls. Normal hospital incident reporting systems cannot be used to monitor for these problems, as they are underreported.

At our hospital, MET personnel are not rostered solely for staffing the MET. Instead, MET staff have normal hospital duties to perform and, when a MET call is activated, they temporarily forgo their normal duties to attend.

This single-centre, structured interview- and questionnaire-based study was conducted over an 18-week period between 29 July and 15 December 2013. The study was conducted in a 650-bed university teaching hospital in Sydney, New South Wales. Participants were all hospital staff who were recorded as attending a MET call on the hospital campus during the study period.

The primary outcome measure was the rate of adverse events and incidents directly related to MET staff leaving normal duties to attend MET calls. Secondary outcome measures were the rates of such events according to staff occupation.

Our hospital used a two-tiered MET system.7,8 The first tier recommended early clinical review by ward teams, and the second tier activated the MET. The MET, led by a medical registrar, included an intensive care registrar, an anaesthetic registrar, three residents or interns, a clinical nurse consultant, and nursing staff from the cardiology department. Security and environmental services staff attended MET calls outside of hospital buildings.

All MET staff had normal hospital duties to perform, and would forgo those duties to attend MET calls. MET attendance to MET calls was mandatory.

All staff attending and providing assistance at MET calls had their details recorded on attendance logs. On weekdays after each MET call, trained interviewers would contact the staff listed. Staff who consented were interviewed using a structured interview form. The following data were collected: number of days since the MET call; staff designation; issues resulting from leaving normal duties to attend the MET call; mechanism of reporting, such as line manager or computerised incident reporting system; and self-reported estimated time spent at the MET call.

To avoid intruding on staff when they were not at work, interviewers were instructed to make reasonable attempts to contact staff either in person, or using their hospital pager or phone, during working hours only. Staff who could not be contacted were sent a written questionnaire version of the structured interview. Completion and return of the questionnaire was considered as consent to participate.

Ethics approval was obtained from the hospital's Human Research and Ethics Committee (CH62/6/2013-030).

The original study definition of adverse event was an “anticipated or unanticipated event that causes, or requires an intervention to prevent, an unfavourable change in a person's condition”.10,11 Institutional approval for the study to proceed, however, was conditional on altering the definition to that used by NSW Health.12 An adverse event was therefore defined as “an unintended patient injury or complication from treatment that results in disability, death or prolonged hospital stay, and is caused by health care management”.12 An incident was defined as “any unplanned event resulting in, or with the potential for, injury, damage or other loss”.12

All incidents were classified according to severity assessment codes12 (Appendix 1) by the hospital manager for clinical quality and risk. Incidents were coded as minimum, minor, moderate, major or serious. Incidents that caused no injury or increased level of patient care, which required no additional review, and led to no financial or service losses were coded as minimum. All incidents were reviewed by an independent safety monitor, and managed using normal hospital procedures.

The MET call rate preceding this study was 17.2 MET calls per 1000 admissions. If our study was conducted similarly to a previous study that ran for 131 days and had a response rate of 64.1%,14 we predicted that 312 MET calls would occur and 1630 interviews would be completed. This would provide a 95% confidence interval of ± 9.7% if the primary outcome measure rate was 200 per 1000 MET participant attendances.

There were 2663 MET call participant attendances recorded. A mean of eight staff members were recorded at each MET call.

Of the two incidents classified as minor, in the first, a patient absconded from the ward and was subsequently found. In the second, a patient sustained a fall without injury. Both incidents occurred while the patient's nurse had left the ward to attend a MET call.

The incident rate for completed interviews and written questionnaires was 222.1 and 168.5 per 1000 MET participant attendances, respectively (P = 0.045).

The median time spent by staff at MET calls was 20 minutes. The proportion of staff who spent 30 minutes or fewer at a MET call was 74.9%. Staff who spent 60 minutes or longer at the MET call reported significantly more incidents (Appendix 3).

The observation that medical staff reported more incidents than nursing staff is consistent with work arrangements. Ward nursing staff provide cover when fellow staff members are indisposed. Medical staff and specialist nursing staff are less likely to have cover because of the specialised nature of their work. Improving cover if MET duty is predicted to affect activities such as procedures, clinics, ward rounds or meal breaks may reduce disruption.

Reducing disruption could also be achieved by reducing the number of junior MET staff and adding a further tier to the MET system, where a smaller MET attends middle-tier MET calls. This would work best in hospitals where the cardiac arrest rates are low. Superfluous staff should also be dismissed to normal duties as soon as practical.

Absolving MET staff of normal duties may reduce disruption; however, a standalone MET at our institution was previously not deemed justifiable because of the low MET call rate.

Whether our results can be extrapolated to other hospitals is uncertain. Our MET call rate appears to be low. Other Australian studies document MET call rates of 8.7–71.3 calls per 1000 admissions.15-20 Hospitals with different MET call rates or MET configurations are likely to have different incident rates and patterns.

The very low formal incident reporting rate is not unexpected, as conventional reporting systems are not designed to detect the problems that this study examined.

The main strength of our study was the large number of respondents. The response rate was reasonable, given our intention not to intrude on staff recreational time, and difficulties interviewing staff working outside of business hours or part-time.

This is the first study to quantify the problems resulting from staff leaving normal duties to attend MET calls. However, our results cannot be generalised to other institutions due to differences in patient care and MET systems. Future studies are needed to quantify these problems in different MET systems, and also to identify which method of staffing the MET results in the least amount of disruption, while ensuring appropriate patient care and maximising efficiency. 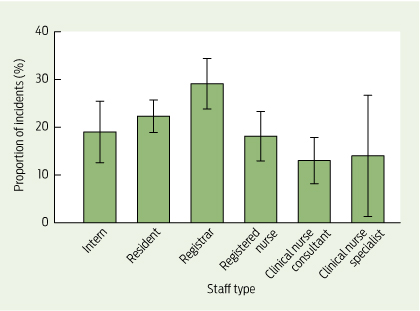